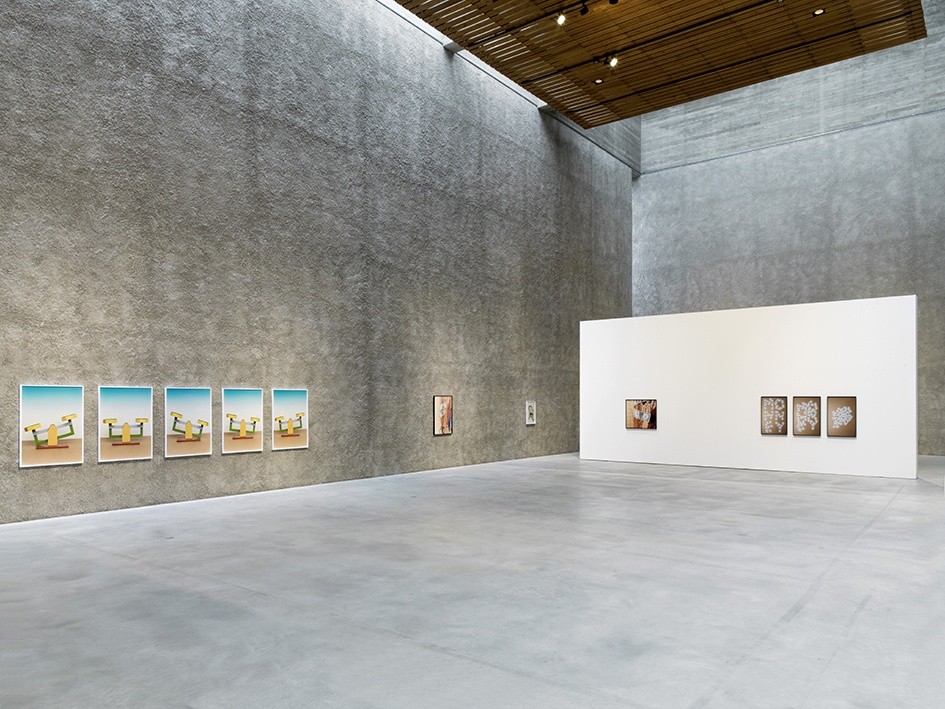 In contrast to any type of image production that aims above all to achieve optimized effect in the digital media, Annette Kelm unleashes the potential inherent in photography to reproduce the world of objects and thereby uncover their cultural foundations and day-to-day aporias or impasses.

On the one hand, her photographs seem dedicated to a thoroughgoingly sober presentation of things, quoting genres such as the still life and studio photography. On the other hand, however, her strictly formal pictorial language with its neutral light and objective view of arranged objects gives the latter a hyper-real presence, freeing them from the realm of the purely factual. Levelled down onto the plane surface and free of any narrative charge, the compositional factor comes to the fore, endowing the motifs in all their visual density and pithiness with a wellnigh rebus-like significance. Thus the things are what they are, yet carry also an abstract significance that is merely ascribed to them. They are straightforward and yet at the same time intractable motifs that seem to fit neither the category of objective documentation nor that of figurative representation. They flatten objects pictorially into a flat plane or line them up in the lines and sequences of photographic experiments and lighting effects. Depicted frequently from the front and with great sharpness of detail, the minimal but nevertheless ornament-oriented world of things marks the translation into the two-dimensional space of photography. The latter’s perspective, narrowing into a single point of view, is part of the dispositif of photography, but also the expression of a subjective vision of the world.

All the objects on view in these photographs are of little value. They are things bought in one-Euro thrift shops or things found in the street – pizza boxes or flowers against a coloured paper background reminiscent of Mondrian. The way they are staged has no ennobling effect, but neither does it simply let the things drift away from reality into spheres of cultural meaning. Grounded in the principle of repetition and variation, the pictures centering on these objects tend rather to emphasize the photographic itself as the production of signs and images. Precisely seriality reveals itself as a way out of a pictorial concept trapped in representation. Based on a complex serial strategy, Annette Kelm’s photography is hypostasized in forever differentiated repetitions. Balancing Wedge shows the identical, clearly personally constructed set of scales in a range of differing inclinations or tilts. The photograph of a pizza box on which an expressively shaped piece of bark is lying contrasts the standard, industrial product with the natural objet trouvé, but only in the various differing portrayals does it become an enigmatic image of photography as a system of signs. And the portrait of the artist Lucie Stahl, showing her standing behind a red blind, is as much formal composition as a study of propinquity and distance, image and simulacrum.

The jeans shirt on which a cup painted with a face has been positioned – all photographed against a gleaming yellow background – could be a self-portrait of the artist. The Jacquard loom with its punch-card system is a forerunner of the binary system in modern computers. Instrumentality, these images make clear, is, however, just one and probably not even the most important category in our dealings with things, which are always also place-holders for something else, something other.

Annette Kelm (*1975, Stuttgart) lives and works in Berlin. She belongs to the most important representatives of contemporary photography from Germany and has recently received the Camera Austria-Prize. Beside group exhibitions like the 54. Venice Biennale (2011) and currently at the Kunstmuseum Bonn (2016), her works have been presented within solo exhibitions at international institutions such as the Museum of Contemporary Art Detroit (2016), VOX. Center of Contemporary Image, Montréal (2016), Kölnischer Kunstverein (2014), Städel Museum, Frankfurt am Main (2012), KW - Institute for Contemporary Art, Berlin (2009), Kunsthalle Zürich (2009) and Witte de With, Rotterdam (2008). Annette Kelm is represnted in collections like that by the Tate Modern, London; Museum of Modern Art, New York, des Centre Pompidou, Paris; Kunsthauses Zürich, Schweiz and the Guggenheim Museum, New York.
www.koeniggalerie.com