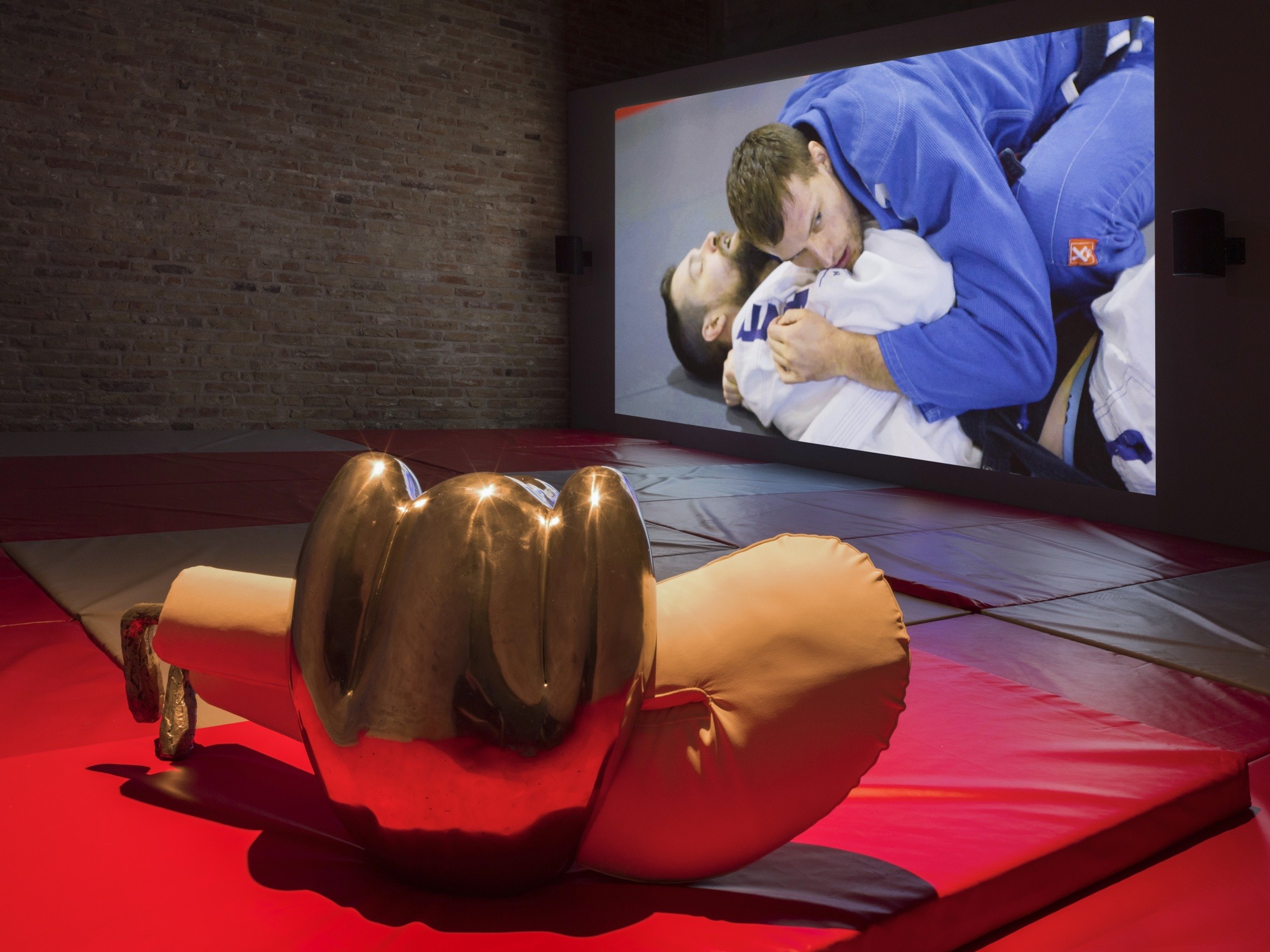 Tuesday, in Latin, is dies Martis, which means “day of Mars,” or the day dedicated to the god of war. In Old English, Tiw's Day is named after “Tíw”, the god of combat, law, and justice in Norse mythology. The values of work, competition and strength have long been associated to this second day of the week.

The artist Camille Henrot is interested in the ways archetypes and mythologies are hidden within the most banal parts of our contemporary experience, and how they continue to structure our everyday. Her film Tuesday as well as the sculptures Wait What and Defeated, shown for the first time in Germany here at KÖNIG GALERIE, were first presented in the artist’s solo exhibition Days Are Dogs at the Palais de Tokyo in Paris in 2017–18, where Henrot explored her research at large about the seven days of the week.

Shot in slow motion, Tuesday interweaves a twenty-minute-long sequence of horses being groomed prior to a competition with men practicing Brazilian Jiu-Jitsu (BJJ). We see thoroughbreds, being prepared, caressed, and adorned for a race. The camera tracks the surface of each animal’s skin as it is being washed, shimmering in the sun like a bronze equestrian statue. Unlike the powerful horse we might see depicted in a historical statue in a public square and Herrscherporträts, however, these horses are shown at rest, before a race, without the glory of any victory.

Henrot’s camera also traces the bodies of the BJJ fighters as they are interlocked on the ground, slowly and carefully using their arms and legs as grappling devices that are constantly forming a knot, a unit of struggle and negotiation. Originated in Japan and developed in Brazil, BJJ involves taking an opponent to the ground and forcing him or her to surrender. This exchange is not fixated on imposing one’s own physical strength onto the other but revolves around the search to inhabit each other’s strengths: they seem to dance back and forth between quick movements and holding still in positions such as the “Straight Footlock,” the “Double Leg,” or the “Toe Hold.” The two bodies alternate between positions of domination to ones of attack, and vice versa, within the ten-minute time limit of each fight. This elasticity of roles, the constant shifting, the cancelling of fixed positions and assumptions in this apparent system of power is one of the elements at the heart of Henrot’s film.

As in much of Henrot’s previous work, this film challenges canonical tropes. One of the most compelling scenes of the film makes a short appearance on the screen: a hand holding a phone showing an Instagram post. The picture is a diptych comparing the bearded bronze face of a man and the bearded face of one of the BJJ fighters seen in other parts of the film. The bronze face belongs to “Boxer at Rest”, a Hellenistic Greek sculpture of a boxer who is depicted resting while wearing his caestus, a type of leather hand wrap used as a battle glove in Pankration. An empty-hand submission sport introduced as an event of the Greek Olympic Games in 648 BCE. This boxer was not only represented at the moment of rest, with the evidence of scars accumulated from his previous fights.

Henrot’s film Tuesday, as well as its companion sculptures Wait What (a bronze sculpture of a seemingly exhausted or dormant headless cat, whose body rests on top of a white resin column with its limbs, tail, and torso completely relaxed) and Defeated (an abstract white leather body held to the ground by an aluminum abstract body) each echo the beauty of the struggle but also show the agony of it. In Tuesday, we do not witness the moment when a fighter is celebrated as a winner; we only see a few quick moments when one of them gently taps his opponent’s body to signal his momentary submission. Similarly, at the end of the film, we only see very few scenes of the horses racing in the field but we never see the moment when the winning horse reaches the finish line; we are just provided with glimpses of the violent nature of mounting horses in competition.

Similar to how masochism uses staging as a way to focus more on the image of pleasure rather than the physical pleasurable act, Tuesday, along with Wait What and Defeated, concentrate on the tension and transformative energy inherent in the anticipation of what is about to happen, or better said, on what could potentially happen. These suspended and interwoven images pervert the submission-domination binary and ultimately the meaning of the gestures: what appears to be a tender caring for horses is made to be an exploitative form of violence, and what is usually an act of struggle between men becomes a demonstration of sensual play.

Born in 1978, Camille Henrot lives and works in New York. Henrot's diverse practice moves seamlessly between film, drawing, and sculpture. Drawing from her wide-ranging research into subjects and disciplines including literature, mythology, cinema, anthropology, evolutionary biology, religion and history, Henrot’s work acutely reconsiders the typologies of objects and established systems of knowledge. A 2013 fellowship at the Smithsonian resulted in her film Grosse Fatigue, for which she was awarded the Silver Lion at the 55th Venice Biennale. Henrot's exhibition “The Pale Fox” was first shown at London's Chisenhale Gallery in 2014 and traveled to Kunsthal Charlottenburg, Copenhagen; Bétonsalon, Paris; and the Westfällischer Kunstverein, Munster.