Catch the Tail by the Tiger 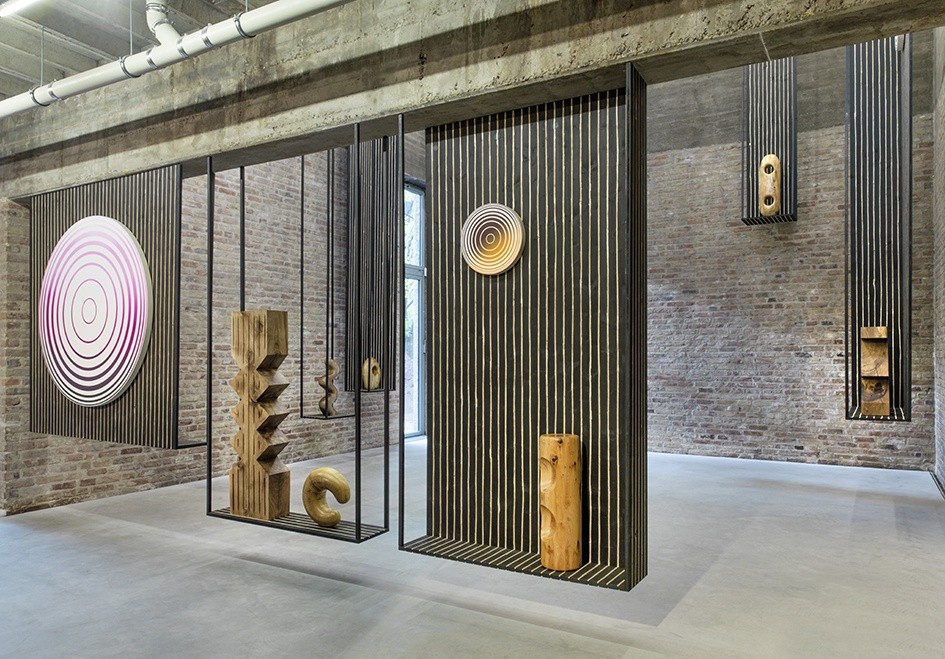 It should come as no surprise that artists are great exhibition designers, but when exhibition design becomes part and parcel of the exhibition itself, something not a little wonderful is liable to happen. Such is the case with the Berlin-based, Swiss artist Claudia Comte’s first exhibition at KÖNIG GALERIE.

Created specifically for the singular, re-purposed church, Comte’s ten inverted plinths are suspended at different heights from the cavernous ceiling for what looks like a hanging jungle. On view in their shelf-like interiors are a selection of Comte’s amorphous wooden sculptures as well as her target paintings. At first glance, the exhibition might overwhelm with its subtly spectacular design, but linger a moment, and the manifold nuances, contradictions and paradoxes that animate Comte’s brash and elegant practice begin to emerge. From the techniques to the materials, not to mention the highly mediated, self-aware relationship with art history, Comte’s work retains an almost miraculous structural integrity despite being pulled in several directions at once. Most salient is the strict logic that underpins and governs a good deal of her decision- making vis-à-vis the human propensity toward imperfection that characterizes the end result. This logic is evident in the fact that the spatial arrangement of the plinths is organized according to a virtual grid as well as the stripes that adorn their surfaces, which have been burned black with a blow torch, and incised precisely five centimeters apart, with a chainsaw wielded by the artist’s own hand.

The same hand fashioned the amorphous, fluidly shaped objects nested among the interiors out of wood (walnut, acacia, ebony, cherry, oak, and olive). However, unlike the plinths, these shapes are so finely worked and finished that their facture is all but undetectable in their surfaces; the objects are almost eerie in their ethereal hardness, ultimately looking all but machine-made. Her sculptural vocabulary, not so much hewn as carefully distilled from the curvilinear, amoeba-like stuff of modernism (Hans Arp, Barbara Hepworth, Isamu

Noguchi, and even Brancusi, to name a few), is rendered even more uncanny by the apparent impossibility of its production. This impression is fed by a variety of factors, from the seemingly exhausted codification of her references (reflected, again, in her target paintings), which is indivisible from the mediated nature of her production, to the apparent superfluity of her labor. This counterintuitive expenditure of energy extends to the fluidity of the forms themselves, which would seem more easily generated in plastic or foam than, say, wood. For all the supposed naturalism of Comte’s work, there is something very unnatural about the whole process, and even the final product. What contradiction could be more pointed, more relevant and contemporary?