When Dinosaurs Ruled The Earth 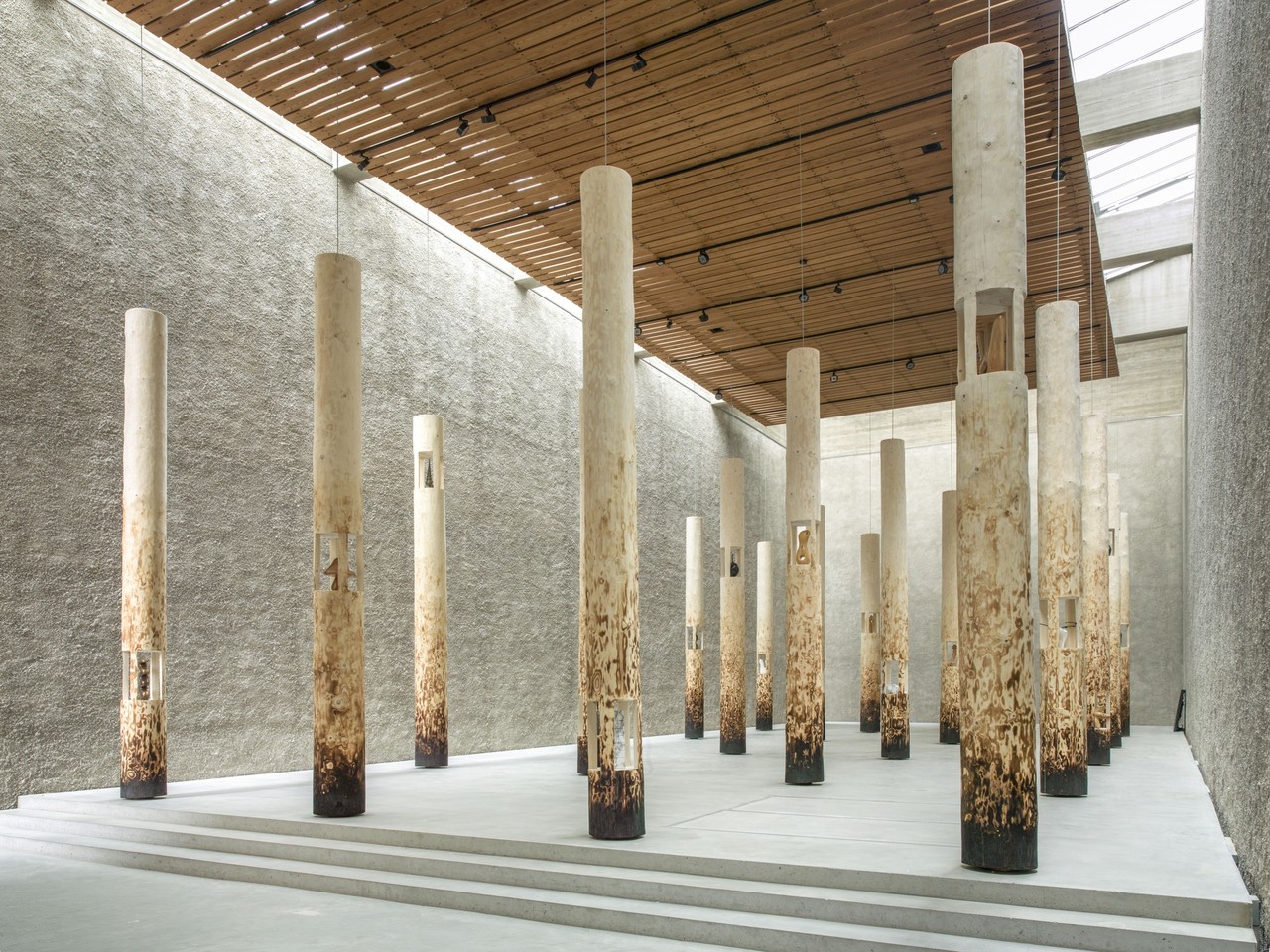 KÖNIG GALERIE is pleased to present 'When Dinosaurs Ruled the Earth', Claudia Comte’s second exhibition at the gallery. Comte has conceived an immersive environment comprising spruce trees, new sculptures, and a multi-channel video installation for the nave of the space.

'When Dinosaurs Ruled the Earth' brings together multiple aspects of Comte’s work with a particular focus on the history of materials and the play between ancient and digital technologies. Returning to the use of wood, marble, and bronze in craft and industrial production which have long played an important role in her work, the exhibition can be seen to ‘look back to look forward’. In uncovering prehistoric technologies, as well as systems and languages in contemporary forms, the exhibition proposes that connections between these ideas might provide help to navigate the Anthropocene.

In the main space of KÖNIG GALERIE, a large grid-formation features twenty spruce trees suspended from the ceiling – each tree revealing a carved reliquary in which wood, marble, and bronze sculptures are placed. The placement of the spruce echoes the load-bearing column supporting the nave. Comte’s idiosyncratic family of bunnies, snakes, and cacti are joined by plastic bottles, cans, and shells. While materials like marble signify antiquity and stability, Comte’s casting of plastic detritus – a material which takes approximately 450 years to decompose – probes the value systems and temporal registers we ascribe to materials. The notion that plastic and other supposedly ‘disposable’ materials disappear from sight is challenged in the exhibition – a reminder that plastics and polymers are now found in the most remote of places.

Illuminating the trees are a suite of 4-D video animations produced in collaboration with the Computer Science Department at the University of Freiburg, Germany. Sculptural renders are repeatedly subjected to a range of algorithmic actions causing them to atrophy over and over again. The algorithm – typically an agent of ‘problem-solving’ touted by global technology firms – is deployed here as an agent of visual subterfuge, reducing apparently solid, stable materials into viscous, runny matter.

In another video work, the remote landscapes of Kyrgyzstan or Papua, Indonesia and are adjoined to the exponential industrialisation of natural resources in Western cultures. While for a Western audience these places invoke romantic ideals about untouched terrain that seem relatively unchanged, on her visit Comte found the opposite to be true, observing that industry, technology, and materials move across the world in molecular drifts.

A soundtrack bringing together the various elements of the exhibition has been developed in close collaboration with Egon Elliut. Overlaying recordings of nature and chanting with melodic sounds relating to the building’s site as a former church, the soundtrack reflects Comte’s mnemonic impressions of the forest. Through the mixing process, the chanting takes on a futuristic quality, while the synthetic beat effectively eschews aural recognition.

Throughout the exhibition, juxtapositions of old and new, material and digital abound. In bringing the natural fibres of wood into contact with the glossy materiality of LCD monitors, Comte exposes the points where nature and culture, prototype and modernity inextricably entwine across time.

Human knowledge is constantly being expanded and challenged by fossiliferous finds, making it possible to detect in today’s resource extraction the traces of Triassic life. From the concentric rings of the spruce – which show different speeds of growth according to ecological and climatic shifts – to the sand and other minerals that are melted together to produce the glass of the monitors, 'When Dinosaurs Ruled the Earth' proposes a different analogue of time – one where past, present, and future are deeply entangled.