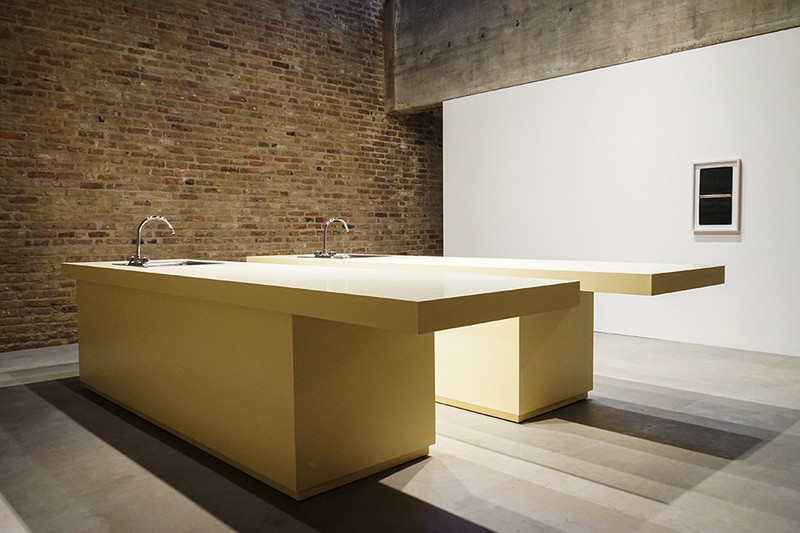 KÖNIG GALERIE is proud to present a solo exhibition by New York based artist Daniel Turner.

The twin sculptures that comprise Britannica (2012) stand with an unsettling stillness. Its surface — an aggressive, almost desensitized, neutral yellow — is embedded with stainless steel sinks and faucets, their contours bearing no trace of hand. Taking the appearance of kitchen equipment, these austere objects resonate beyond the domestic experience suggesting institutional or agricultural connotations. By a careful calibration of scale, the units form a singular representation of mass standardization. The interior of each basin exposes a residue of unfiltered brackish water, revealing an Anthropocene geology.

Alongside Britannica, Turner will present R-2271 (2015), an object which resembles a binder, that has been stripped bare, something that survived the transition from its periodic handling. Painterly in nature, the work suggests the embrace of all that we would put into systems; notation, names and facts, catalogues, even entire libraries. Yet every piece useful to a user has fallen away from it. The rings, which provide function, have been removed, leaving a worn and seemingly vacant foundation.

Despite possessing visually recognizable features, the works could be said to look beyond themselves and suggest the very conditions that constructed them. Neither of the two emerges instantaneously from the void; nonetheless, an air of absence surrounds them in their very physicality. What fluctuates between the two is a non-objective aura similar to the fraught tension one feels in a waiting room. The objects are connected by a circumstance that both transcends and describes their very appearance. Out of this uncanniness a distance is engendered. This “distance,” or the sensation of something always receding from us, is perhaps the very dynamic aporia in which slippage can occur, in which our sensing faculties reroute themselves.

The exhibition coincides with the release of Turner's new book, Marjorie, published by Études Studio. Limited edition signed copies of the publication will be available at the preview.
www.koeniggalerie.com