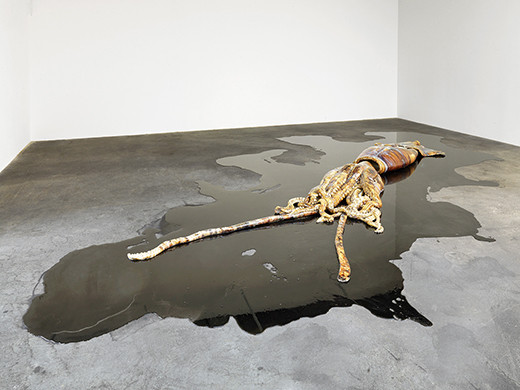 Johann König, Berlin is delighted to be able to present the fourth solo exhibition of David Zink Yi’s work in the Gallery. The driving force behind Zink Yi’s artistic creations – be they in the form of sculpture, film or photographs – is the all-encompassing and multi-layered inquiry into the phenomenon of identity. When contemplating his works, we believe at first to be able to recognize familiar motifs, which, however, Zink Yi then de-stabilizes by means of shifts, or by the manner of display or portrayal, so creating a new image.

Standing – or rather, lying – in the spatial and conceptual centre of the exhibition in Johann König’s Southern Gallery is one of the major works in David Zink Yi's current sculptural oeuvre: Untitled (Architeuthis), 2013, a naturalistic representation of the creature of that name. The work is part of a series of ceramic sculptures created over the past two years, each on average 19 ft long and weighing 440 lbs, each elaborately glazed and shimmering in a range of opalescent colours. According to the latest scientific research, a real-life architeuthis can grow to up to 46 ft long and lives in the sea at depths of up to 12,000 ft. It was only one year ago, in 2013, that an international research team managed to capture film footage of a giant deep-sea squid in its natural habitat – a world first, although the existence of giant squid had been scientifically established since the nineteenth century with the help of carcass parts washed up on beaches. Accordingly, David Zink Yi presents his architeuthis as an unmoving, lifeless form, pressed to the floor. It seems as if this deep-sea dweller too has been washed ashore and has perished, snatched away from its natural environment. In 2012, during an exhibition at the Tate Modern, David Zink Yi himself emphasized the importance of the creature’s lifeless state: "... sure, these molluscs in general offer a fascinating motif for sculpture, but for me it’s not so much about a realistic reproduction of Nature, but more a reference to this strange moment when these creatures reveal themselves to us, as a kind of garbage of Nature. It is this moment that is for me a much more intriguing motif." And so Untitled (Architeuthis), with its magnificently iridescent surface, seems like a piece of sepulchure sculpture highlighting the transition between two separate worlds. David Zink Yi places the ceramic work in a pool of Japanese ink and syrup. This is less a narrative element than a formal decision, since it gives the sculpture a pedestal or frame.

David Zink Yi, (b. 1973 in Lima/Peru) studied at the Akademie der Bildenden Künste, Munich and at the Universität der Künste, Berlin. His most recent solo exhibitions were at Hauser&Wirth, Zurich (2013), Kunstverein Braunschweig, Germany (2013), Museo de arte de Lima (2012), NBK Berlin (2012) as well as in the Midway Contemporary Art, Minneapolis (2011), MAK, Wien (2010) or at the Kunst Halle, Sankt Gallen (2009). He took part in group exhibitions in the Tate Modern, London (2012), Museo Sala de arte, Mexico (2012) and Ludwig Forum im Aachen, Germany (2012). In 2013 David Zink Yi participated in the 55.Biennale in Venice. Works by Zink Yi are represented in numerous collections such as those of the Museum of Contemporary Art, Los Angeles, the MUDAM, Luxemburg and Museum Ludwig, Cologne.
www.koeniggalerie.com