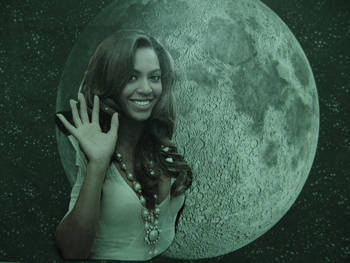 Under the title Recent Sex / Love Works Cologne-based artist Johannes Wohnseifer (b.1967) is showing works from the years 2006 and 2007 – in other words recent works, an expression that features prominently in announcements by contemporary galleries of upcoming exhibitions.
The exhibition at Johann König, Berlin illustrates the scope of Johannes Wohnseifer’s work on both a formal as well as thematic level: his exploration of cultural phenomena, references and shifts of meaning using the medium of sculpture, painting, collage, installation and film.

The printout of an image downloaded from the web of American singer and actress Beyoncé Knowles is fixed to the wall behind perforated aluminium. The performer is part of the mainstream and today’s image of femininity. As for the work itself, it can be seen as citing Michaela Meise’s “Destiny’s Child Box“ from the year 2002. While Meise wrote the lyrics of the successful song “Survivor“ on a cardboard box, Johannes Wohnseifer isolates the image of the band’s most successful member and presents her as a contemporary icon.

Feminized White Cube (2006) takes an ironic look at male and female phenomena. Though the sculpture recalls a cube employed in the museum and taken from art-historical context, it is painted shiny white and its edges are somewhat rounded. This slight intervention in a familiar shape creates a twist in the interpretation of male dominated minimal art.
Permanent Full Moon (2007) takes up the topic of this celestial body and its confirmed or at least supposed influence on our lives, love and sexuality. Thanks to a special control device the light in the round light box is programmed to the phases of the moon. It lights up when it is not full moon and goes out when there is.

Originally created in 1996 as a reference to a blue movie, "In front of the green door" already received a new coding during preparations for an exhibition in Ulm in 2001 thanks to the sign on it for the psychotherapy department. In the current exhibition there is a shift into a new reference system: the green painted wooden door is given a 30 cm deep stainless steel frame, through which the work attains its sculptural identity in the exhibition context. Wohnseifer’s artistic investigation of logos, brands and company names is reflected in Bigger Defloration (2006). On display for the first time the negative to the Apple company logo – in effect, the bitten-out piece.

The work Untitled (kleenex mathematics) is accompanied by the recently published artist’s book on sale in the gallery. The paper collages are made of photographs that Wohnseifer took while traveling or simply going about his life, and which he combines to produce a collage with sentences, words and names from spam mails. In doing so he arranges the mass of text and images – a phenomenon of today’s information society – in a poetic way.