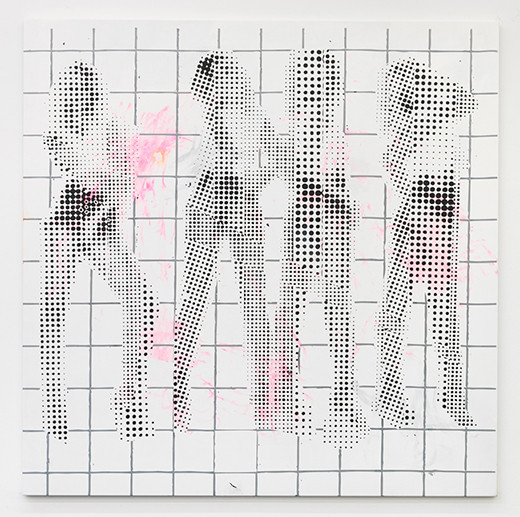 Johann König, Berlin is pleased to present "Water From A Melted Ice Sculpture" that will mark Johannes Wohnseifer's sixth solo exhibition in the gallery. In a conceptually rigorous, yet poetic manner seven new series of works address the spheres of politics, production, publicity and privacy. Wohnseifer is able to melt these areas together while their supposed discernment is not gone lost in favor of mutual reflection.

Clearly this is an artistic strategy that, for example, comes to the fore in the series of "Bücherbilder" [Book Pictures] in which the private and the public sphere enter into a relationship of tension. For Wohnseifer, price tags of art books and exhibition catalogs serve as templates for canvases in black and white. They were bought by the artist in the Walther König bookshop in Cologne a few months ago. The price tags refer to a wide spectrum of art, ranging from the stance of the deceased friend Michel Majerus, who took up phenomena of everyday culture in his paintings and installations, to politically motivated art like that of the French artist group Claire Fontaine. At the same time, the price tags imply Wohnseifer's private readings and thus suggest a concomitant part of his artistic practice. As a series of works, they return from the private production process back in the public presentation.

The transformation of ephemeral everyday objects into art - that is denoted in the exhibition title, which refers to the sculpture of "Ice Cube" of the also represented by Johann König artist Jeppe Hein - is made visible in the series "Farbtafeln" [Color Plates]: paint lids from the artist's studio are incorporated in monochrome color surfaces that correspond with the color of the respective tub - or not. The lid in the semi-abstract, semi-figurative paintings reflects an image of the artist's studio situation. They are witnesses and testimonies of realized works of art. As color plates, they can now also think about the future as being produced paintings since they already suggest imaginable color constellations.

Finally, distinct political character is shown in the ten-part series "Neue Farben" [New colors]. The ten small paintings are painted in RAL colors that have been specifically designed for camouflage purposes for the deployment of the Armed Forces in Afghanistan. The so-called "Umtarnfarben" are not listed in any freely available color gamut. They serve the secrecy and the protection in the war zone and are even secret information. Wohnseifer applied the colors on aluminum. The result of the process of painting is abstract, reminiscent of idyllic landscapes structures. As soon as you are aware of the colors's background, their beauty, however, proves to be deceptive.