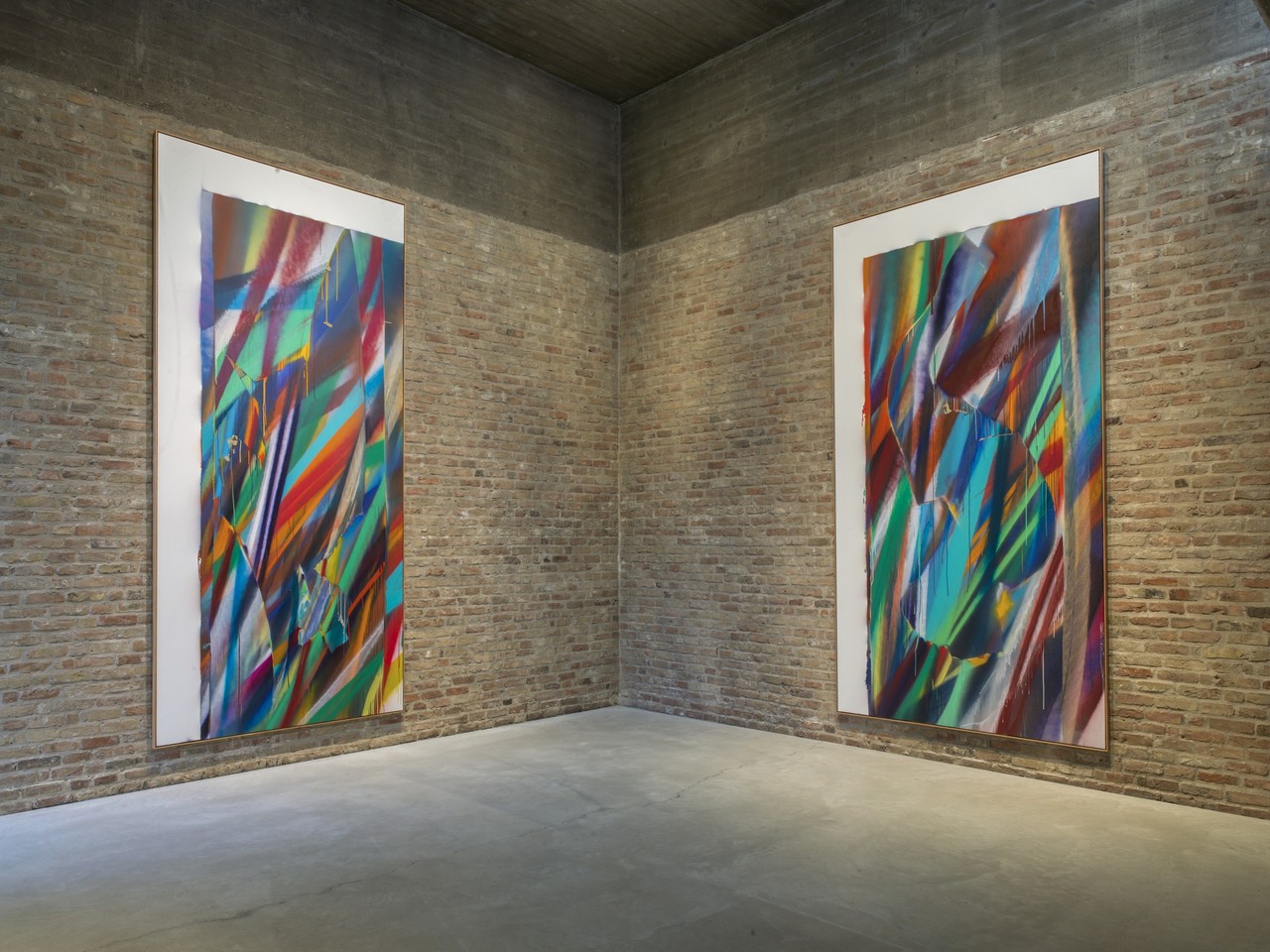 The KÖNIG GALERIE, Berlin, takes great pleasure in presenting Katharina Grosse’s second exhibition on the ST. AGNES site. In the Chapel exhibition space, three new, large-format paintings are now on display. Grosse, who is renowned for her expansive, spatial works, often manifested in the public realm, here introduces and inaugurates a new group of works executed on canvas.

In 1998, in the overall context of her comprehensive project to re-define the presence of painting, its function and materiality, Katharina Grosse began to spray paint on parts of the surrounding architecture, including items of furniture and fitments. In this way, she released the application of colour from its conventional and pre-determined image-bearer, spreading veils of paint over a wide variety of objects and transgressing the identity-giving boundaries of things. In a counter-movement, however, directed against the free mobility of painting and the visual dissolution of categorical differences, Grosse also worked on bringing and binding the sprayed colour back to rectangular picture formats.

With the three pictures on exhibition here, all produced during the current year, Katharina Grosse now presents a new type of large-format, multi-coloured painting on canvas. The painterly gesture translates into a sheaf of diagonally inclined, longitudinally extended and yet variously shaped bands and striations of colour, diversely overlaid over one another and abruptly juxtaposed, sharply separated from one another or indistinctly contoured, at times concealing each other, in other cases allowing transparency. The colours contrast vehemently and yet combine to form a tonality that reflects more the manufacturer’s palette than the artist’s own compositional decisions. The distanced, mechanically driven application of colour is matched by a certain indifference to chromatic subtlety; traces of paint trickling down the canvas underscore the pragmatic side of Grosse’s art.

The sheer size of the new works, their polychrome plenitude of colour and the complexity of their painterly sedimentation coupled with the simultaneous tendency towards a unifying register of colours and forms suggest an overwhelming, engulfing artistic experience and a corresponding immersion of the beholder – akin to a painting of the sublime. Yet there are two aspects that break through and disturb the aesthetic totality of the pictures. On the one hand, the beholder can distinguish in part sharply delimited, irregularly formed zones of painting – territories that are separated inlay-like from one another and are differentiated in detail by the placing and the chromatic and formal disposition of the pictorial elements, but not by the general character of the painting. In terms of technique, these separations are brought about by several layers being painted over one another, each time part of the already sprayed area being covered by a template and so not being re-covered again. Thus the fault lines criss-crossing the worked-over area point to the revoked, rescinded visibility of large parts of the painting.

This aspect of fragmentariness, which becomes apparent only after prolonged study – the signposting of inaccessible and yet present parts, the transition from the visible to the invisible – finds an echo in the relationship between what has been painted and what has been left unpainted. The coloured painting does not everywhere reach the edge of the canvas: clearly, various peripheral strips were covered over throughout the painting process and were exposed only at the finish. By means of this procedure, Grosse emphasizes a special definition of the pictorial field: the canvas acts as a projection surface onto which the sprayed painting settles, without being necessarily restricted to, or obligated to, this surface – as if there were, in an invisible realm, a painting of unlimited expanse that partially and temporarily allows itself to be manifested within the boundaries of the pictorial field.

With these pictures on canvas, Grosse offers a response to the especial hybrid ambition of her architectural paintings – their wish to touch every nook and cranny with paint and to blur the boundaries between things – making the confession, again delivered in excess, that she cannot manifest anything other than excerpts of a comprehensive connectivity.

Katharina Grosse (b. 1961 in Freiburg im Breisgau, Germany) lives and works in Berlin. Among her best known solo exhibitions in the recent past have been those in the MoMA PS1, Long Island, in the Museum Frieder Burda, Baden-Baden, in the Nasher Sculpture Center, Dallas, in the Museum Kunstpalast, Düsseldorf, in MASS MoCA, Massachusetts, in the Kunstmuseum Bonn, and in the Palais de Tokyo, Paris. In addition, Grosse has taken part in the Biennales in Sydney, Taipeh and New Orleans and in 2015 in Venice.

Works by Katharina Grosse can be found in museum collections such as the Nasher Sculpture Center, Dallas, the Centre Pompidou, Paris, the Kunsthaus Zürich, the Kunstmuseum Bonn, the Städtische Galerie im Lenbachhaus, Munich, the Museu Serralves, Porto, the Sprengel Museum Hanover, the Arken Museum of Modern Art, Copenhagen, the De Pont Museum, Tilburg, the FNAC, France, the Gallery of Modern Art, Queensland, and the Magasin 3 Stockholm Konsthall, Stockholm.
www.koeniggalerie.com