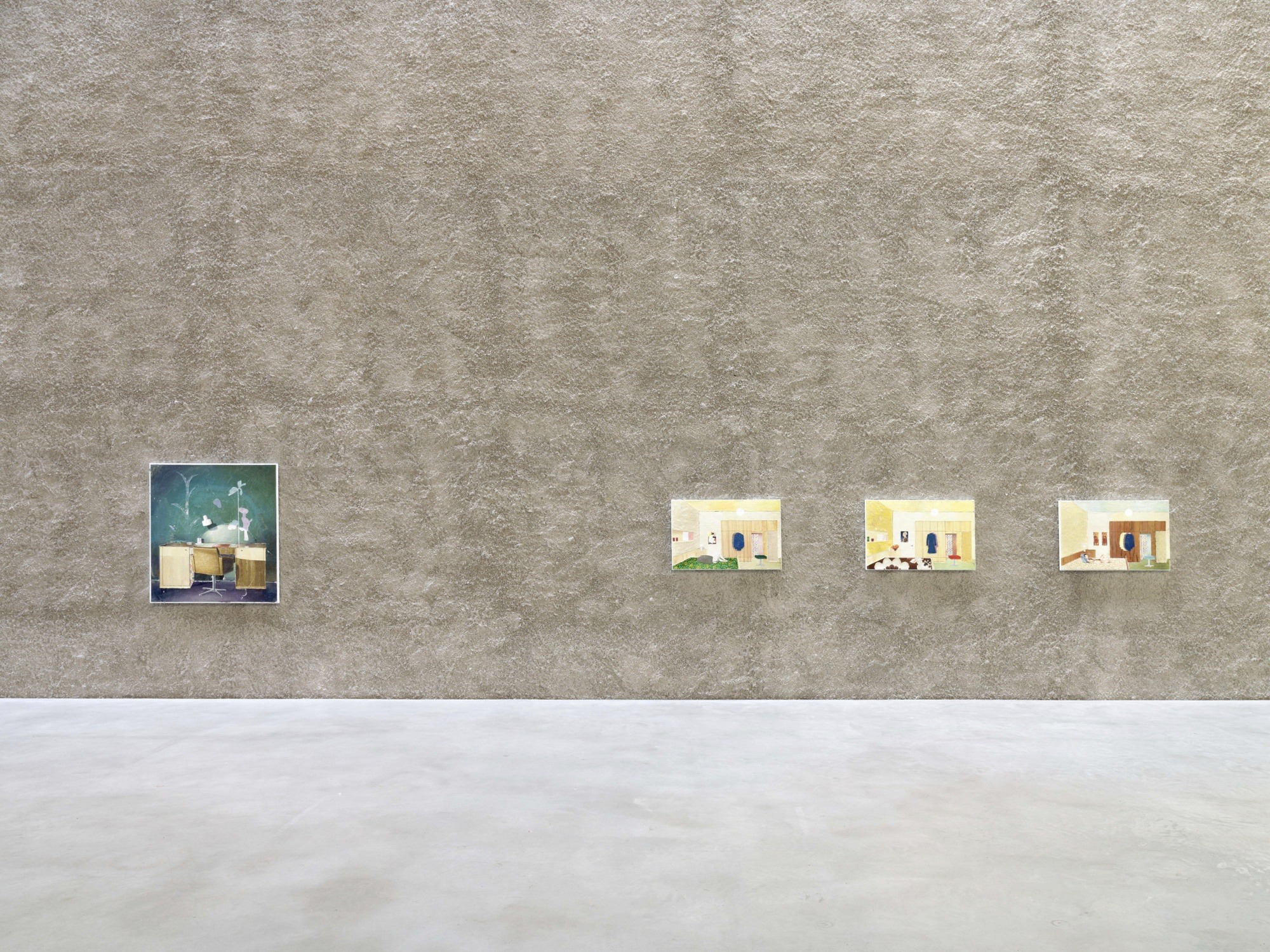 During Gallery Weekend, Matthias Weischer is showing 16 new works in the Nave, the main exhibition space at the former St. Agnes church. Having predominantly focused on landscape painting in recent years, he now returns to his origins. In the early 2000s he became well-known for his striking interiors, a subject matter that he takes up once again. These square, small-format works are defined by four color surfaces that form a kind of viewing box—a format that was already present in the artist’s work fifteen years ago. Observing the differences in the work between then and now, thus becomes even more interesting.

Weischer now works in series, in which he portrays the same imagery on three or four canvases but with subtle variations, as in a group of paintings showing a mattress. The visual space of each work is identically constructed, and the images only differ in color and in the position of the depicted objects. In contrast to earlier works, these are not hermetic realms of color; the space of the image is also structured through ornamental details. In these works, the rooms have a kind of stucco border framing the perimeter. The border does not correspond to classical decor. Instead, with its modern-looking geometric pattern it seems to function as an ironic commentary on ornamentation itself. Didn’t modern architecture declare ornament a “crime,” banning it from interior architecture? This constructivist border element is something of a painted oxymoron and poses a contrast to the floral pattern on the mattress leaning against the wall.

These images not only show a tendency to emphasize a more overt structuring of the surface, but also below the pillow on the ground one sees a place where the pictorial space seems to be breaking down into its original components. At first, one thinks that scattered articles of clothing are depicted, but the longer one looks the more amorphous the impression becomes, until one ultimately sees nothing more than dried paint on the floor. Sometimes Weischer paints the patterned surfaces of his interiors in such a way that shows the materiality of the paint and the canvas. In the process, the depicted living units become lived-in spaces, and traces of paint serve as signs of life. One could certainly describe this small series as a set of conceptual images that convey, in condensed form, something about Weischer’s intentions: his images are now both more consciously composed and more stringently reduced to their essentials. The tension that the new interiors hold stems from the contradiction between the use of ornament and the chosen color palette.

A series of three images recalling hotel rooms show most clearly where this new departure is leading, especially because the interior furnishings of these spaces remain consistently the same. The standard furnishings of each room include a bed, a stool, a lamp, and a shower curtain. Personal items such as a bouquet of flowers, a book, or a calendar vary in each image. In essence, the hotel room embodies the modular living environments that have long become an accepted part of everyday life. The patterns and ornamentation of the wall paper, shower curtain, bed cover, and closet doors convey a heightened awareness for industrial design. The images seem to be metaphors for how much or little the humans who inhabit these spaces can actually alter them. For this reason human figures now appear more frequently and in less sketchy form than in Weischer’s older images. Ultimately art itself becomes part of the interior decor, as one notices in the depicted reproductions of historical paintings, hung always at the same location in the different images. Exemplifying various art historical epochs, these pictures within a picture stand out in the abstract interiors. What one notices in this double twist of images and what only this reproduction of reproductions makes clear is how industrial design lacks the aesthetic and spiritual content that recognizable and familiar imagery provides.

Matthias Weischer (*1973 in Elte, Germany) lives and works in Leipzig, where he completed his Masters at the Academy of Fine Arts Leipzig in 2003. He has had solo exhibition at the Gemeentemuseum, Den Haag (2014); Museum der bildenden Künste Leipzig (2010); Kunsthalle Mainz (2009); Centro de Arte Contemporáneo de Málaga (2009); Neuer Berliner Kunstverein (2007); and Ludwig Forum Internationale Kunst, Aachen (2006). In 2005 Weischer participated in the Prague Biennale and the 51st Venice Biennale. He was awarded the Eduard-Arnhold-Stipendium (2017), the residency fellowship of the Deutsche Akademie Rom Villa Massimo, Rome (2007); the art prize of the Leipziger Volkszeitung (2005); and the working fellowship of Stiftung Kunstfonds Bonn e.V. (2002). He has also won a number of awards, including the August Macke Prize of the City of Meschede (2005) and the Rolex Mentor and Masterstudent Initiative with David Hockney (2004). Works by Weischer are part of numerous collections, including Weserburg, Bremen; Museum Voorlinden, Wassenar; Arken Museum of Modern Art; Museum für Moderne Kunst (MMK), Frankfurt am Main; Gemeentemuseum, Den Haag; MOCA Grand Avenue, Los Angeles, and The Saatchi Gallery, London. His work has been the subject of multiple monographic publications.