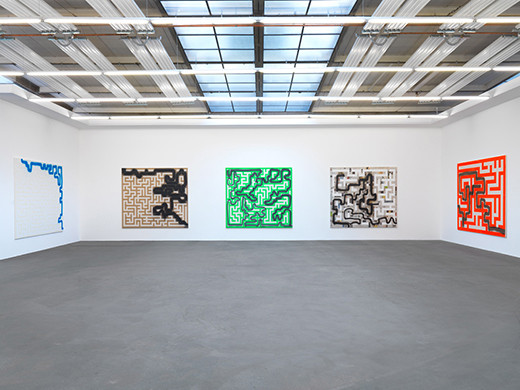 Johann König, Berlin is delighted to present "Hauptweg und Nebenwege" [Highway and Byways], the fourth solo exhibition of the artist to be hosted in the Gallery and the first viewing of paintings created by the artist in the years 2010 to 2012.

Sailstorfer’s works are based on a fundament of straightforward, understandable structures. Often they are concerned with human endeavour as self-driven activity and articulation, with the human necessity of leaving traces.

In the installation "Forst" ["Forest"] (2010) currently on display in the Berlinische Galerie, five trees, hung upside down and slowly turning on their own axes, take up the entire, ten-metre-high exhibition hall. Sailstorfer thus brings Nature into the exhibition space while at the same time, in his work "Schwarzwald"["Black Forest"] (2010) – for which he paints a square area of forest land black and transmits its natural decomposition into the exhibition hall by means of a videocam – he conquers artistic space in the wilds of Nature.

In works such as "Zeit ist keine Autobahn" ["Time is not a Motorway"] (2005 to 2012), in which car tyres rotate against a wall and wear themselves down without making any headway, the artist is concerned for the central existential conditions of artistic endeavour.

Just as in "Sternschnuppe" ["Shooting Star"] (2002), the artist deploys an installation involving a Mercedes W123 with catapult function and a street-lamp projectile already in shooting position, thus taking into his own hands the emergence of a star in the heavens, so in his latest works also Sailstorfer reveals himself to be a practically-minded dreamer, yearning for the possibility of directing life himself, or at least of watching over it.

"Maze" – large-scale pictures of labyrinths in which the exits, detours or solution-bringing paths are marked with the swift, gestural stroke of a spray-can – is concerned, in the (spray-can) trace of the artist, with fundamental themes of being alive as an individual. The labyrinth in its baroque interpretation as a maze, in which one is to lose one’s seeking self or to have the experience of a loss of bearings, of "a-mazement", as a symbol of the world or of life. The two-dimensional presentation gives the artist an overview – as to where he stands, which way he is taking, where he is in error, and whether he will arrive. In traversing the presentation with a spray-can, he experiences swift successes, but also blocked paths, ill-advised steps, sometimes total failure, as part of the process, part of the search for the "right" path, on which the thick, self-assured stroke can also dissolve into a fine line.

On his white or copper-coated canvases Sailstorfer uses exclusivley black and shimmering neon, which makes the pictures stand out strongly from the wall. The pictures take on an object-like quality and have a corresponding presence in the exhibition space, similar to the works of the ZERO artists in the 1960s.

Labyrinths are seen on the one hand as "ornamental structures", but on the other hand as something to be understood metaphorically, as "the parergonal overgrowing the ergonal" (Gérard Raulet). In addition, they stand for the nec plus ultra of a sculptural work of art that can be walked through and experienced. A labyrinth triggers instinctive quest movements: in three-dimensional form it usually initiates an immediate process of finding one’s bearings in space; when studying a two-dimensional maze, the eyes equally set out in search of some way through. Sailstorfer, however, anticipates and pre-empts this: what the beholder sees is a puzzle already solved, a maze de-mystified – and the corresponding process.

In the current exhibition, alongside the "Maze" pictures, the artist is displaying a three-dimensional mural from the "Lenkrad" ["Steering-Wheel"] (2012) work group – a car steering-wheel, carved in polystyrene and then cast in aluminium, its form implying movement and a distance to be covered. To the right, to the left, straight on, no matter – the journey seems to be leading into uncertainty, into the far-away yonder, and at the same time up against the wall. The work leaves the journey’s outcome open, restricting itself to the process of moving, of driving.

The euphoria involved in this process and the melancholy become recognizable at the moment the destination is reached. In the street-lamp shooting star that ends up not in the universe but back home on a Bavarian lawn, in the ephemeral end-product of "Schwarzwald" or in the attempts to find bearings in the "Maze" pictures, yearning, utopia and tragedy are conjoined.

Thus the new, two-dimensional works of this sculptor, who is forever asking questions of and expanding the classic concept of sculpture, are emblematic of his methodical strength, the pure and simple realization of a pure and simple idea with pure and simple means, all with a precise formal intent – and with extraordinary poeticism.