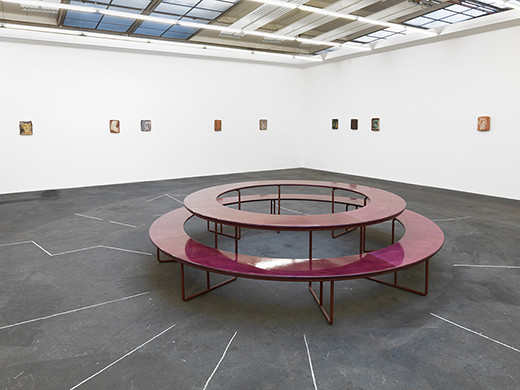 Johann König, Berlin is delighted to present new works by Michaela Meise in this, her fifth solo exhibition. The artist herself characterizes the exhibition in the following words:

“In the gallery space you can find two circles – in the middle, a circular table bench and around the walls a circle of portraits.
There is no philosophy behind the group of people portrayed, at least no conscious one. The people depicted here are unsurprising choices: friends, female and male, the daughters of friends, my boyfriend, but also people encountered by chance. The common ground between them is that they are all living people. We have sat in one another’s presence and looked at one another. Each relief marks a period of one to two hours. The overlaid portrait “Birgit und Anna Lucia” accordingly marks two periods of time, which took place one after the other.

As a material, clay is soft, has its own weight, is non-toxic and easy to handle. It has a special tactile quality which the philosopher Luce Irigary described in conversation as “perpetual touch”: the material is touched and at the same time touches you. In the course of the drying process, clay becomes mimosa-like, sensitive to jolts, to temperature and to humidity. My examples have perhaps already suggested the point: clay is a material outstandingly suited to representing human beings. Most ceramic portraits are a marbling of two types of clay, thus intensifying potential tensions in the material. The glaze is always monochrome, differences in colour arising actually only because of the various colours of the clays and because of one layer of glaze trickling through the next.

Only some time afterwards did it strike me that the portrait appointments are somewhat reminiscent of Marina Abramovic’s work “The Artist is Present” (2010) and even more, actually, of Jay-Z’s sequel “Picasso Baby: A Performance Art Film” (2013). Mere encounters between people become an enhanced, heightened event that make a good number of human beings from a variety of social classes, even millionaires – oh, come on, billionaires! (to quote Jay-Z) – go absolutely crazy. Is there now a greater yearning to look at one another calmly and undisturbed?

The table bench in the middle of the gallery space is a place where people could sit, work and eat together. It was created jointly with the Berlin locksmith Bernd Euler and takes its idea and shape from a piece of furniture designed in 1928 by the architect Ferdinand Kramer for a Frankfurt kindergarten. At that time, Kramer was employed in the Frankfurt-on-Main Building Department, working with Margarete Schütte-Lihotzky, Ernst May and others on a socially integrative urban renewal of the city. The project involved not only buildings but also their interior design. The circular table has aesthetic and functional aspects, but equally points up a pedagogic and political strategy of putting community into practice. What fun it can be to form a group! How terrible it can be! Can people be a heterogeneous group? Can one also stand alongside, beside the circle? Who is absent? Is their absence noticed at all?

The markings on the floor are an example of different identities, in this case sexual identities – being men, being women, being hermaphrodites, being transmen and transwomen and then being a good few other things for which there is no sign or which perhaps have no wish to be given an identity.

The round bench bears the name “Chelsea Kramer”. The second name is derived from the architect Ferdinand Kramer; the first name refers to Chelsea Manning, who was convicted by a US military court of violation of the Espionage Act because as a soldier she had passed on data and video material to Wikileaks. The data material includes, among other things, cases of human rights infringements committed by the troops occupying Iraq. Manning will serve her sentence as a transwoman in a prison for men, since her sexual identity transcends a prison system that is not adjusted to cope with it – a situation in which she is not alone.”

Michaela Meise (b. 1976) lives and works in Berlin. From 2010 to 2012 she held a guest professorship in sculpture at the Universität der Künste, Berlin. Her most recent solo exhibitions were at Standard, Oslo (2013), Richard Telles Fine Art, Los Angeles (2013), in Grazer Kunstverein (2011), at Greene Naftali, New York (2009) and the Badischer Kunstverein (2009). Her works have also been on display in numerous group exhibitions, such as in the Irish Museum of Modern Art (IMMA), Dublin (2013); TANAS - Raum für zeitgenössische türkische Kunst, Berlin (2013); Marres Maastricht Centre for Contemporary Culture, Netherlands (2012); Kölnischer Kunstverein (2012). In addition, Michaela Meise has given several concerts, e.g. in the Münchner Kammerspiele (2013) and in Berlin, Brussels, Maastricht, Cologne and Hamburg.
www.koeniggalerie.com