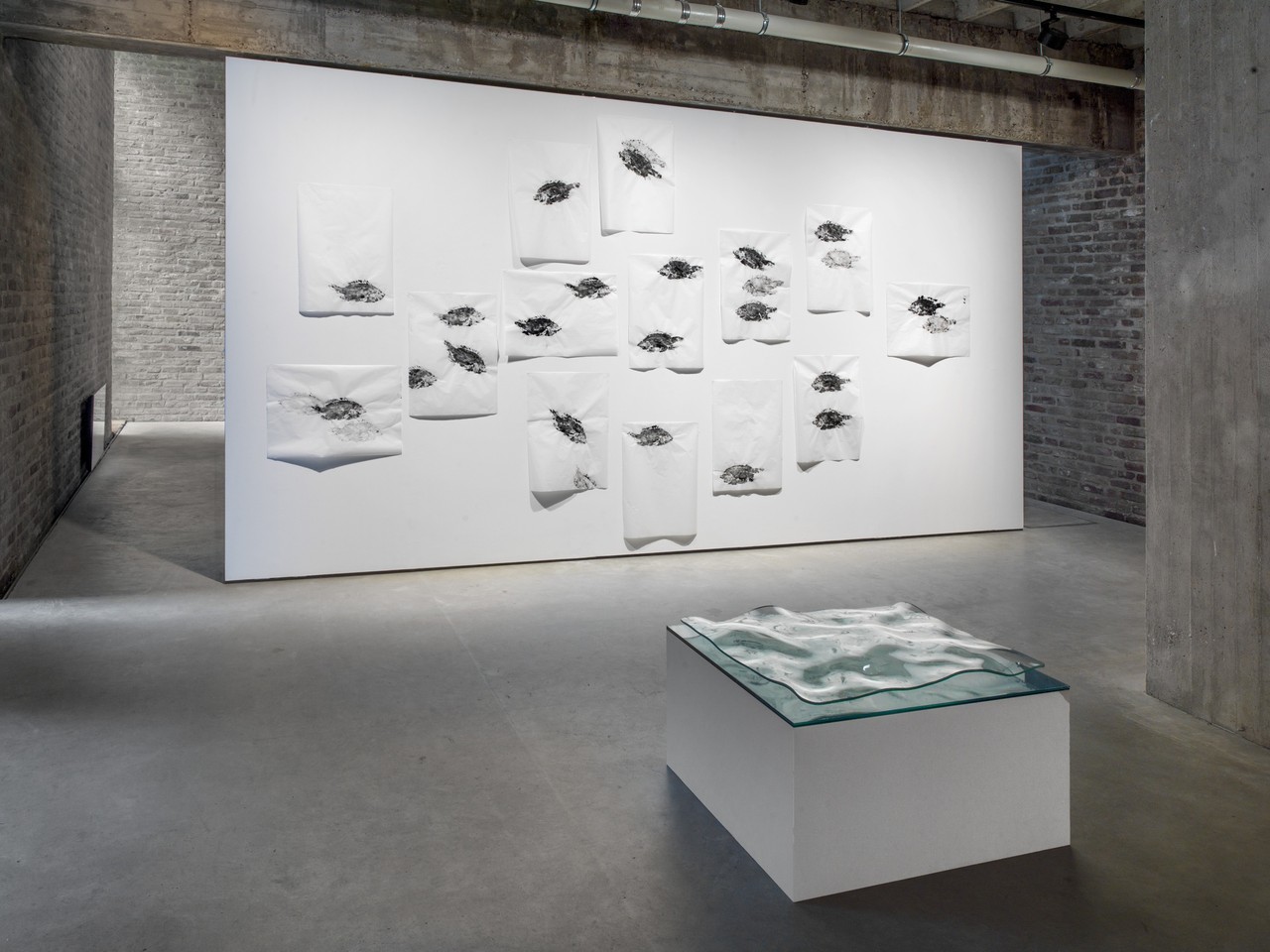 Horizons, such as seascapes, make men feel fragmented. The scale of the sea, sky and sun shrinks our own presence on earth to a mere second in time. And so we measure: Time in relation to earth (its rock strata) is “geological time”. A tiny fraction of a split geological nano second ago, we named the present “anthropocene”: the period of time when men began modifying the earth, sea and sky, and anthropogenic residue has come to stratify the world. More precisely: a world which created the horseshoe crab about 400 million years ago. And here we are, right in the middle of Tue Greenfort’s 6th solo exhibition at KÖNIG GALLERY, Greenfort’s first show at the ST AGNES chapel. Under the evocative title 400 Million Years, Greenfort (*1973 in Holbaek, Denmark) presents four new groups of works that evolve around processes of the natural world, discourses of ecology and notions of the environment, while the horseshoe crab figures as a leitmotif to the exhibition’s perspective on human and non-human agency.

As it predates life on soil for about 400 million years we call the horseshoe crab a living fossil. On the concrete floor of our gallery, Greenfort’s works seem uncannily petrified and vigorously lively at the same time. Each sculpture of the new series Horseshoe Crabs (concrete, 35x35x15cm, 2017) is rendered in life-size and all of them are hand-cast from concrete, that contains industrial fly ashes; which is a fossil fuel residue of energy plants. Here, the great significance of the term micro comes to the fore:, since it is the ashes’ micro-particles that cause a macro-environmental problem. Nonetheless, Greenfort refrains from clear-cut moralist delineations and puts these pulverised particles to a new and aesthetically stunning use. His critical method prevails, and while taking a look at the creatures spawning in the exhibition, we are also reminded of the endangerment of their biodiverse mating habitat, as shallow waters and coastal zones are continuously modified by men’s maritime industries.

Beyond that, the arcane blueblood of the horseshoe crab – its recipe to immortality – is a vital bio-medical commodity, involuntarily donated by thousands of crabs each year. The video work Horseshoe Crabs, Companion Species, YouTube Series I (HD video, 12:24 min, 2013/2017) visualizes such paradoxes on a media-reflective level: Harvested entirely from YouTube, holiday home videos from the beach – in which the alien-like bodies of the crabs are met with exquisite fear and exploratory bravery by pals and pets alike – are interlaced with scientific documentation of the creatures’ bio-chemical features and methods of study. Atmospheric electronical music and a creepy computerized voice-over add to the technological dimension of the bio-political configurations, in this case studies of a “companion species” (Donna Haraway) and an example of “multi-species-intra-action” (Karan Barad). A body politic torn open, simultaneously exterminated and recreated, from egg-state to industrial and scientific afterlife – a fossil life-form haunting our seas and shores.

The fish Tilapia (ink on rice paper, 50x69 cm, 2017) is another living fossil. Yet, it is so less in a scientific sense than in its artistic resurrection in print: an actual 1:1 imprint of the fish’s body covered in ink on a paper made of crop, namely rice. While the technique is usually applied for recording a fisherman’s catch, Greenfort had another idea in mind, which was sparked during the artist’s recent research at Lake Victoria in Tanzania. The lake has become infamous as the location and example of Hubert Sauper’s 2004-documentary on the fishing industry, titled Darwin’s Nightmare. Though of relatively young 400.000 years of geological age, lake Nam Lolwe (as it is called in Northern Tanzania’s native language Luo) is ridden with a complexity akin to the aforementioned crab story. It is a delicate kinship: While some species of the Tilapia tribe are endemic to the lake, some others introduced only in the 1950s are invasive and predatory, causing the complete disappearance of the former, and many others – and ultimately of the lake’s entire environmental equilibrium. The dramatic dynamics of life and death at stake come to the fore in Greenfort’s black-and-white display of fish on the brink of fossilization. Archival gestures of precarious beings, and not quite unlike forensic fingerprints, those melancholy works of art testify to an experience of the kinship of the beauty and barbarity, colonialism, organic ornamentation, and crime. What lies underneath the surface of symbiosis? What lifts the sum of our parts? What scales the weight of sedimentation? A simple, recognizable, every day form: the seascape, the reflection of light on water, the oscillation of a transfer of energy traveling through space and substance. Seascape (glass, 80 x 90 x 15 cm, 2017) is all that, and so conveys Greenfort’s concerns and creations in a starkly contrasting lyrical way. Metaphors abound, brimming with species, communities, economies; to be experienced, simply – by yourself.

Tue Greenfort’s exhibition 400 Million Years is a snapshot of specimen at a point in time. It pursues a sampling sited between faux classification and amateur collecting. It redistributes visibility between the invading and the annihilated. Yet visibility alone does not make art. Imagination sets in. And here we are, in the middle of alliances into uncharted realms.

Tue Greenfort’s interdisciplinary practice deals with issues such as the public and private realm, nature and culture. Interweaving these subjects with the language of art he formulates a multi-facetted critique of today's dominant economical and scientific production. Intrigued by the dynamics in the natural world, Greenfort’s work often evolves around ecology and its history, including the environment, social relations, and human subjectivity. Tue Greenfort (*1973 in Holbaek / Denmark) lives and works in Berlin where he is represented by KÖNIG GALERIE. His work is currently on view in a solo exhibition at DEN FRIE, and at Roskilde Festival, Copenhagen, as well as in a a group show at Arken Museum of Modern Art, Ishøj, at the Aarhus Triennale 2017, Aarhus and at TBA21, Vienna. As a participant of dOCUMENTA(13) in Kassel, Greenfort co-curated an archive on multi-species and co-evolution, named The Worldly House. He has had extensive solo presentations at The Museum of Contemporary Art Oslo, Oslo (2016), KÖNIG GALERIE (2014), Sorø Kunstmuseum (2014), SculptureCenter, New York (2013), Berlinische Galerie (2012), South London Gallery (2011), Kunstverein Braunschweig (2008) and Secession, Vienna (2007). He has participated in numerous international exhibitions at renowned institutions including Neues Museum, Nürnberg (2016), ZKM Karlsruhe, Karlsruhe (2015), Kunstmuseum Linz (2014), Gemeentemuseum, Den Haag (2013), Georg-KolbeMuseum, Berlin (2012), Kunstverein Hannover (2011), Royal Academy of Arts, London (2009), Fondazione Morra Greco, Naples (2008), Skulptur Projekte Münster (2007) and Witte de With, Rotterdam (2006). Among his publications the most comprehensive, Linear Deflection (2009), was published by Walther König.
www.koeniggalerie.com