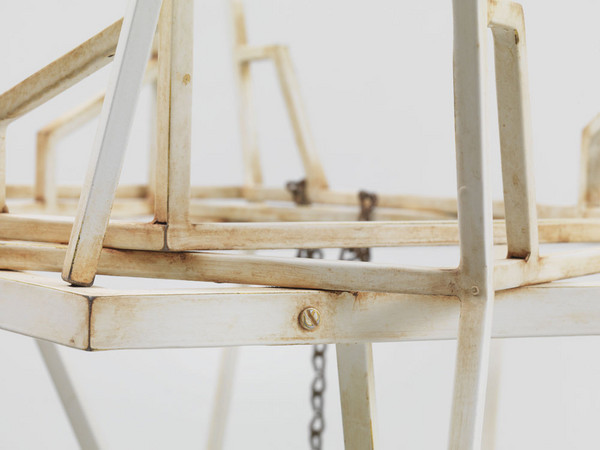 Martin Boyce’s sculptures, photographs and installations are informed by his involvement with Modern art, architecture and design. Boyce compresses the gap between utopian ideals and the reality of Modern visions into dark and poetic images. In his works beauty and failure as well as protective interior and natural forces are collapsing into each other.  For the exhibition at Johnen Galerie, Martin Boyce has for the first time developed a sculpture based on the form of a fireplace. This ‘fireplace’ opens up to another space, giving the secure feeling of the ‘fireside room’ an ambivalent atmosphere, reminiscent of Surrealism. One of the references that come to mind is René Magritte’s painting ‘Time Transfixed (La Durée Poignardée)’, in which a steam locomotive emerges from the inside of a mantled chimney into a room. Furthermore, the fireplace is mounted higher than usual, which reminds us of the perspective trickery of Carlo Mollino’s fireplace at Casa Mollino in Turin, Italy.
Mobiles with rusted chains increase the described uncertainty in atmosphere through associations with trees, transience and the inescapability of natural processes. The works of Martin Boyce resemble melancholic poems, even more so as the titles and texts of the works echo this mood.
Martin Boyce (born 1967) lives and works in Glasgow, where he attended the Glasgow School of Art until 1990. In 2011 he was awarded the Turner Prize. Solo exhibitions of his works were shown at Museum für Moderne Kunst (MMK) Frankfurt (2002), Centre d'Art Contemporain, Geneva (2007), Scottish Pavilion at the Biennale di Venezia (2009) and the Baltic Centre for Contemporary Art, Gateshead (2011), GB, to name a few.
In 2015 Martin Boyce will have solo exhibitions at the Museum für Gegenwartskunst, Basel and Rhode Island School of Design, Providence, USA.