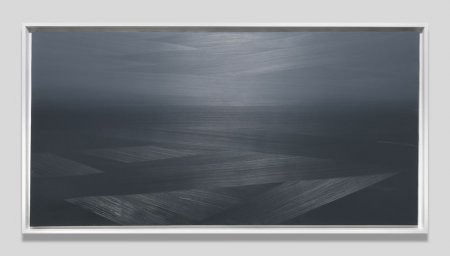 Johnen Galerie is pleased to present its second solo exhibition with new works by Polish artist Rafal Bujnowski. Bujnowski has been working for a number of years with ‘lamp black’, a very intense black tone with high gloss. The artist applies the color with a broad brushstroke that creates fine relief structures reflecting the light in different ways. In the end, the pictures are generated by light: Bujnowski does not see himself as creator, but rather takes himself as ‘assistant’. Recently he started to present these images behind highly reflective glass so that space, light and painting ‘melt’ together and alter the images according to the location of the viewer.
The ‘Corner’ paintings are installed in the corners of the gallery room and interface between painting and sculpture. They explore new possibilities of specific objects, in the sense of Donald Judd’s 1965 essay.

Paintings such as ‘Eye Sockets’ consist of different grey and black brush strokes that allude in their combination to unfinished building developments. Bujnowski’s works are never removed from everyday concerns. The painting stays present as a material object, whether it depicts familiar matters or whether it reflects light, color, brushstrokes or the room surrounding it. Building facades, poster walls, protest banners or devotional objects are as much part of it as painterly reproductions of family portraits or news photographs. But unlike a painter such as Gerhard Richter, Bujnowski’s painting does not aim for highest professional skill, but rather for calculated simplicity.

Bujnowski does not balk for his conceptual approach to be seen in proximity to assembly instructions. Seemingly one only requires the right paint, a specific type of brushes or tools to be able to produce the works. While his earlier works were conceived to be inexpensive art for the everyday household, like his series ‘Cheap Art from Poland’, his more recent work resides between abstract high art and everyday reality of paint, material, light and space. Bujnowski deliberately distances his work from all poetic, dreamy, fantastic and opulent aspects of painting and refers to the objective investigations of minimal and conceptual art.

Finally, the exhibition also shows a headstone for Cyparis (1875 – 1929), a folk hero on the Carribean island of Martinique who was one of the few survivors of the volcanic eruption of 1902. He was incarcerated and survived in his cell while most of the 20,000 inhabitants of the island died. Bujnowski made the stone with the black volcanic sand of the island. The latent anarchistic undertone in Bujnowski’s work finds its counterpart in the story of the firebrand who is the lone survivor.

Bujnowski was born in Krakow in 1974. He studied architecture at the Technical University in Krakow and finished his degree in Graphic design at the Krakow Academy of Fine Arts (1996-2000). He was a founding member of the ‘Ladnie’-group (together with Wilhelm Sasnal and Marcin Maciejowski). Bujnowski lives and works in Krakow.
www.johnengalerie.de