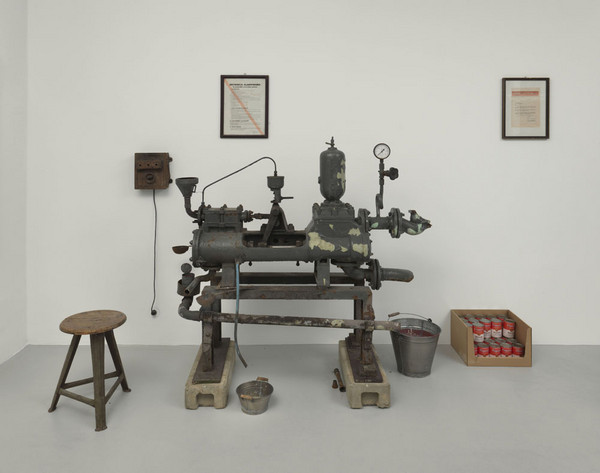 Johnen Galerie is proud to present Robert Kusmirowski’s third solo show at the gallery. As common in his practice, Kusmirowski reconstructs historical artefacts and settings to examine and manipulate historical themes. By using old, archaic techniques and equipment, his exhibitions also have the materiality and appearance of a bygone time.

With the present exhibition Square2 Kusmirowski aims at explaining phenomena in art that are usually invisible and undiscovered as they are part of the creative process, barely tangible before the decisive idea for the artwork-to-be. Square2 shows a possbile re-production of those primary apparitions that happen before the genesis of an artwork. Thus the works on view can be seen as prototypes before they went into production.

The artist instances Andy Warhol’s famous Campbell’s soup cans as example to start a logical journey that –starting from the quadrangular label of the original painting of the soup can- leads the viewer to the fundamentally different positioned square of Kasimir Malevich. His Black Square was the initial work of Suprematism, characterized by its compositions consisting of geometric forms (e.g. squares, rectangles, circles, straight lines and cross shapes). The first and most prominent composition was the Black Square on white background that Malevich himself termed as ‚the atom of painting’, the very essence of form. True to this belief he completed his Suprematism with a white square on white ground. Suprematism as a style was resolved to completely separate art from reality, to pursue the most simple forms possible and finally break with all narrative and figurative aspects.

Kusmirowski about-faces this mechanism. The purity and essential reduction inherent to Malevich’ works gets turned to the outside: Kusmirowski’s interpretation presents a black square as a physically manifest, haptic analogy to the delicate, elusive original. The show bears testimony to intense physical labor by visualizing the exhausting efforts, not unlike those undertaken by workers tarring the streets. The aspect of the artist’s pain that Malevich intentionally hid from the viewer is shown ‚squared’, raised to the second power. The work aims at stressing the physicality inherent to the concept of Kasimir Malevich whose painting of a black square turned out to be rather sophisticated and delicate. Kusmirowski’s presentation reverses the process of perception and translates Malevich’ arduous intellectual process into the adequate weight / severity.

Along the journey between the two squares of Malevich and Warhol other great positions of Modern Art act a part in the exhibition: Jackson Pollock’s physically laborious action paintings, executed by dripping paint in rythmic motions around rectangular canvases lying on the floor complement Kusmirowski’s concept to finally conclude by referencing Roman Opalka famous rows upon rows of densely painted white numerals. Opalka began painting on black backgrounds, but changed over the years into grey to finally light up the backgrounds to an almost white tone today. While Opalka wants to show the passing of time, Kusmirowski’s version stresses the morphological affiliation to Malevich and Suprematism as a whole.