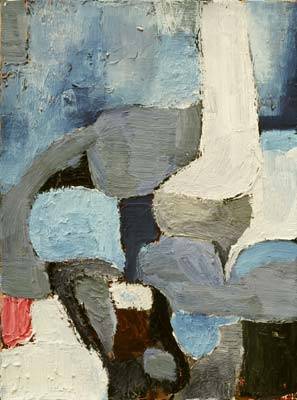 For its latest solo exhibition, the Johnen Gallery presents new pictures from Rodney Graham, born in 1949 in Vancouver, Canada.

After literature, photography, classical music, sculpture, film and rock music, Rodney Graham has turned his attention to painting for his first solo exhibition in Berlin. As always, he is fascinated by the great masters of each discipline, who through their work have set standards of universal validity. His attitude is imbued with both admiration and contradiction. For example, he estranges the sculptures of David Judd, the master of meaningless surfaces, by utilizing them as bookshelves for the works of Sigmund Freud, the master of psychological depth. As such, he illustrates the use of deconstuctivistic wit to play the one-sidedness of great systems off against each other.

In the field of modern painting, only Picasso came into question as both exemplar and adversary. Indeed, David challenges Goliath. For this dialogue, Graham makes use of all the techniques and tricks that modern artists since Duchamp have had at their disposal. He proceeds with a mixture of: earnest imitation, ironic distance (implied by the exhibition title), discourse with the historical context (Poster) and veritable deconstruction. Hence, although the pictures are to be taken seriously, they are really only part of a more complex system of relationships. Here arise connections to the project “Crocodile Tears”, in which Douglas Huebler created a dialogue with painting, using copies, texts, comics and photos, all of which served to critically question the great masters. Rodney Graham’s attitude is more playful and less ideological. In contrast to Huebler, his pictures are not poor copies (for Huebler, an ironic take on the originals he had rejected), but rather attempts to create new originals out of both mimicry and his own contribution. The pictures assert their claim to quality, but not to mastery. They understand themselves as being intertwined in text, history and discourse, placing themselves modestly beside other, equally valid media.

Within the context of an exchange of projects, this exhibition will continue from November 15-19 in the Gallery Raster in Warsaw. During that period, the Gallery Raster will present a project on the Polish poet Wladyslaw Broniewski in our gallery space.