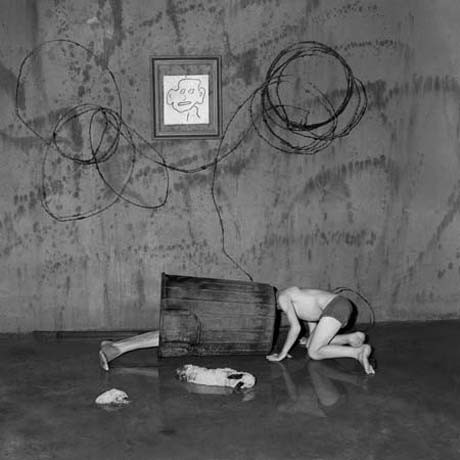 „It is difficult to explain this place except that I think it exists in some way or another in most people’s mind.“
Roger Ballen

Roger Ballen’s photographs are like images from a waking dream: compelling and thought-provoking, with layers of rich details, flashes of dark humor, and an altered sense of place. Blurring the boundaries between documentary photography and autonomic art, his work is both a powerful social statement and a complex psychological study.

Accompanying the exhibition at Johnen Galerie Berlin Phaidon Press publishes Boarding House by Roger Ballen, a new collection of photographs by the South African photographer. Showcasing over 70 black and white images, mostly unpublished, this is Ballen’s most formally sophisticated work to date. An introductory essay by photography curator David Travis is looking at these images in the wider context of Ballen’s career.

Boarding House is a space of transient residence, of comings and goings, of people sheltered in a place they are using for their immediate survival. Basic and fundamental, the structure is furnished with objects necessary for an elementary existence, decorated with evocative drawings, and littered throughout with animals. Remnants function there as physical symbols of events that have occurred in the space; broken pieces of a functional reality exist as the leftovers of scenarios that have been played out there. The altered sense of place of this temporary abode creates a sense of alienation, which acts as a jumping off point for the imagination to run wild. The tableaux have a greater emphasis on drawn and sculptural elements, and the sense of collaboration between the artist and his subjects is increasingly relevant.

Similar to his critically acclaimed work Outland and Shadow Chamber, the Boarding House is a journey of discovery in which we leave our ordinary selves behind and confront a primitive part of the human condition and its psyche. Whether the place is real or imaginary is both indecipherable and irrelevant. It is a place where Ballen’s subconscious and the viewer’s inhibitions can occupy its own universe.

Roger Ballen was born in New York in 1950. Since 1982 he has been living and taking photographs in South Africa. In 2001 Outland (Phaidon Press, 2001) received the Best Photography Book of the Year Award at PhotoEspaña. In 2002 Ballen won the Photographer of the Year Award at the inaugural Rencontres d’Arles Awards. The same year Ballen ́s latest publication Shadow Chamber (Phaidon) has been released and he had one-man shows at the Museum of Contemporary Art in San Diego and Gagosian Gallery in Los Angeles. 2006 Ballen participated in the 4th Berlin Biannual for Contemporary Art. His work is represented in many museums, including the Stedelijk Museum in Amsterdam, La Maison Européenne de la Photographie in Paris, and the Museum of Modern Art in New York.