The Object of Observation (Changes By Being Observed) 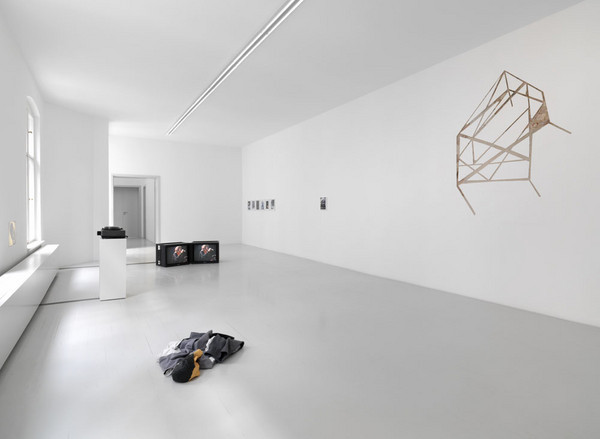 Installation view
THE OBJECT OF OBSERVATION (CHANGES BY BEING OBSERVED)
1 July - 3 September, 2011

With subjects that ranging from Alexander Rodchenko to Yvonne Rainer, and from Antomy Gormley to Robert Smithson, "The Object of Observation (Changes By Being Observed)", brings together works by Jennifer Bornstein, Abraham Cruzvillegas, Sam Durant, Ryan Gander, Mario Garcia Torres and Derek Sullivan.
Working reflexively from the past, each of the artists in the exhibition, similarly to Lee with his own work, remake, regenerate and reconsider the work of other artists in order to articulate their own artistic practice. Citing "Subject Matter", Dan Graham's 1969 text that featured a survey of his artistic contemporaries as a starting point, the exhibition takes Graham's original title and uses the process of re-translation (from English "Subject Matter" to German "Betrachtungsgegenstand" and then back to English "The Object of Observation") in order to characterize the potential of a source manifesting itself in unpredictable ways and taking on an unrecognizable form.
Featuring artworks that employ strategies of abstraction, figuration, appropriation and performance, each of the works presented investigates the formal and historical legacies of previous artworks in a purposeful attempt to re-orient our perceptions of them.
Working from a constructivist sculpture made by Alexander Rodchenko, Abraham Cruzvillegas renders a portrait of Rodchenko's sculpture by engraving a drawing directly into the wall of the gallery, thereby transforming a three-dimensional abstract object into a flat figural image.
Jennifer Bornstein's series of etchings are based on photographs taken by the Los Angeles photographer Sam Wagstaff, Jr. By re-staging the photos with actors and then drawing them on copper plates that are transferred onto paper, the multiple stages of production involved in realizing the project brings the artist materially closer to her recreation even as they drift away from the original source. Bornstein's etchings are accompanied by a 16mm film that recreates various studio performances choreographed by Yvonne Rainer.
I think... (2011) by Ryan Gander features a felt costume made by the artist's mother and a rubber mask made by his father based on the artist's loose physical description of Antony Gormley. Left on the floor of the gallery, as if discarded by the owner, the work imaginatively acts as potential clothing for one of Gormley's sculptural self-portraits while also providing a route of pantomime and disguise for the artist.
Derek Sullivan presents More Young Americans (2011), a frieze of illustrations derived from various post-war pamphlets and catalogs. Posited as images for an absent book, the relationship between the illustrations shuffles between patterns derived from textile designs of Popova and Stepanova, the modernist compositions of Frank Stella and the Op-art patterns of Victor Vasarely.
In citing Funk Lessons, Adrian Piper's seminal performance from the early 80s as a template, Mario Garcia Torres' Moonwalk Lesson (Rigo Style) (2006) reconsiders the legacy of Rigo Tovar, the 70s Mexican pop star who innovated the Moonwalk slide step before it became famous as Michael Jackson’s signature dance. Documenting a group of art students teaching themselves the move, Torres' 35mm slide installation also functions as a pedagogical tool for viewers to teach themselves Tovar's move.
Making reference to Robert Smithson's Mirror Displacements in the Yucatan (1969), Sam Durant's spray-painted mirror Crime is the highest form of sensuality / Kill you for nothing (2010) replicates radical slogans that respond to the effects of global hegemony while simultaneously tagging Smithson's minimally clean surface of perception with political content. Accompanying the mirror is Entropy in Reverse (Gimme Shelter Backwards) (2003), a two-channel video installation that reverses the Albert and David Maylses documentary of the Rolling Stones’ famous concert at Altamont in 1969. Aligning a specific event that signaled the end of hippie culture along with Smithson's ideas of inevitable disorder, the video inverts Smithson's logic of entropy.
www.johnengalerie.de