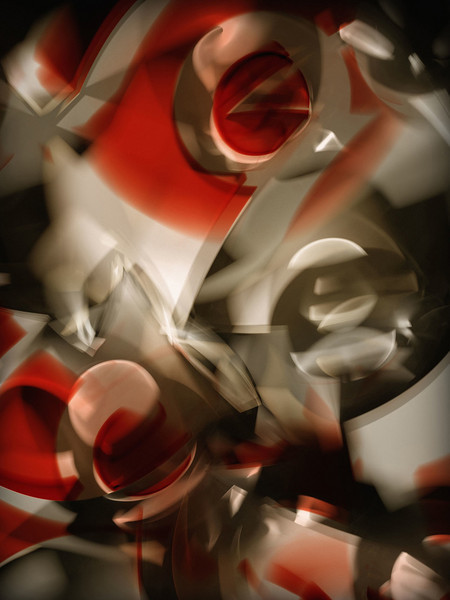 Fascinated by the photograms by László Moholy-Nagy, Man Ray and others, Thomas Ruff started to explore the creation of images without a camera more intensively, looking for a way of producing photograms in a controlled way. Together with Wenzel S. Spingler, with the aid of a 3-D programme he developed the parameters for a virtual darkroom. In it, various objects (lenses, sticks, spirals, paper strips, balls, and other objects) are “built” in 3-D and then placed on or above digital paper. In contrast to his historical predecessors, however, Ruff uses coloured light in the exposure of the objects. Afterwards, he has the projection of the shadows on the underground of the virtual space render an image. This process enables him to transform the black-and-white aesthetics of the avant-garde of the early twentieth century into a coloured aesthetics of the early twenty-first century. He contrasts the rather limited technical possibilities of analogue photography with the almost unlimited possibilities of digital photography. By transforming an “old” technique or form of image creation into a contemporary visual language, he deconstructs the works of the Western picture archive. He heightens their complexity and reassembles them into pictures of the greatest formal rigour and beauty.
With the new series phg., Thomas Ruff thus adds another building block to his ongoing engagement with the technologies, genres, and history of photography.
Thomas Ruff was born in Zell am Harmersbach, Germany in 1958. His works have been shown in numerous exhibitions, lately at Sala Alcalá in Madrid (2013), Haus der Kunst in Munich (2012), Museum of Contemporary Art Chicago (2011), Centro de Arte Contemporáneo de Málaga (2011), Kunsthalle Wien (2009), Castello di Rivoli, Turin (2009), and Műcsarnok Kunsthalle, Budapest (2008).
Thomas Ruff lives and works in Düsseldorf.
www.johnengalerie.de