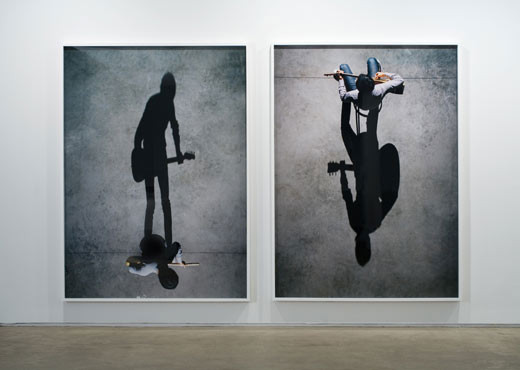 Lee‘s video installation Goldberg-Variations, Aria BWV 988, Johann Sebastian Bach, 1741 (Glenn Gould, 1981) shows one keyboard each on two screens that have been mounted next to each other on the wall. On each of these keyboards, one of the artist’s hands plays - in unison with the other - Bach’s piano piece mentioned in this work’s title. Lee always acts himself in his music orientated videos – even though he is not a musician. His amateurism is in fact part of his conceptual projects. For this work, Lee took piano lessons and let himself be instructed during the filming with respect to playing and positioning of the hand. The left and the right hand were filmed separately and figure by figure. Later, they were cut together and synchronised. The cuts are partly hard and thus remain visible. Overall, the playing sounds a bit raw but quite masterly. Lee’s reconstruction of this piece refers to Glenn Gould’s famous Bach interpretations. However, it does not refer to his first studio recording of the “Variations” of 1955 (the beginning of the pianist’s career), but to the legendary one that was made shortly before his death in 1981. Gould, who had not been giving public concerts since 1964 and who had consequently concentrated on electronic media in order to maximise his work’s quality, had shown a great interest in the recording process. He researched the effects on the musical argument of editing uncountable versions into one recording. Lee’s imitation of this technique emphasises the question of authorship and authenticity – a question that was already addressed by Gould’s work of major importance which was itself already the highly manipulated second version of his interpretation of Bach’s piece of music.

Lee‘s photo diptych My My, Hey Hey (Out of the Blue) / Hey Hey, My My (Into the Black), Neil Young, 1979 shows Lee twice – once holding an acoustic and once holding an electric guitar – in Neil Young’s pose during the recording of his live album Rust Never Sleeps. The photos are taken from above and show the plan views especially of the long shadows that Lee cast on the ground. As an allusion to Young’s creative restlessness and self-reflection – which manifests itself in his characteristic double variations of the same song – the works are installed to mirror each other, like the two sides of a record.

Tim Lee was born in Korea in 1975 and is a Canadian citizen. He lives and works in Vancouver. Lee’s artistic practice is based on the strategy of repetition respectively of the questions of how an event, a picture or a piece of music changes through re-staging or new interpretation. All of Lee’s works show connections to early conceptual art, which can be found sometimes in the form of allusions and sometimes explicitly. The affiliations with art of, for example, Bruce Nauman, Dan Graham, A.M. Rodtschenko or Laszlo Moholy-Nagy that Lee picks up, demonstrate his interest in artists who not only work with different media as well but have already established a system of self-references themselves. Lee segregates aspects of various high-art-strategies and correlates them to pop-cultural traditions. By combining artistic media like video works, photos, sculptures and paintings, he starts association chains that connect elements of early video art, slapstick comedy, rock music of the 1970s and experimental photography. In so doing, he connects such diverse characters as Nauman and Moholy-Nagy to Neil Young and Glenn Gould.

The artist himself is always the centre of his works that reconstruct important moments of North-American pop culture in the form of quasi-documentary testimonials. Lee’s work is typically a complexly cross-linked structure of references and meanings. He repeats key moments or works of the best artists in a subject in his amateurish way. He combines, condenses and slackens the original idea to the border of ridiculousness in order to point from there into the sublime. It is Lee’s humour that differentiates his cover versions from the remakes of the original versions. Lee’s mixture of acquisition, homage and alteration of his quotes connects moments of pop culture with aspects of high art, especially in allusion to late modern art and early conceptual art. With his lax and comic approach, the artist eases the access to his references and examines the individual aspects. So almost playfully, Lee finally reaches a core of his works: the questioning of nationality and affiliation, of ethnic and cultural identity - an interest in this connection which stems from Lee’s own, hybrid origins.