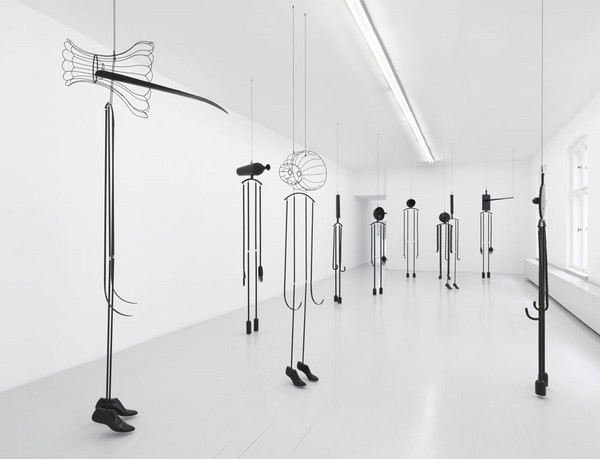 The gallery is pleased to present an exhibition of new works by Wiebke Siem. There will be also the first solo show of Jadwiga Maziarska in Germany (curated by Barbara Piwowarska).
On the occasion of Jadwiga Maziarska’s 100th birthday, Johnen Galerie indroduces her work, still not well known in this country. Not only the Polish background connects Wiebke Siem with Jadwiga Maziarska, they are also related by their great appreciation of the dark, theatrical and political work of Tadeusz Kantor. In Jadwiga Maziarska’s work the optimism of modernism is palpable, Wiebke Siem’s observation of modernism is rather critical and ironical. During the 1970s and 80s the work of both artists shared some common ground and thus led to some interesting confrontations.

Wiebke Siem’s new works combine collage, sculpture and drawing into figures of highly ambivalent appeal. The viewer discovers allusions to Classic Modernism, housekeeping and kitchen, and African sculpture. These spheres are being interwoven ironically, making it difficult to determine irony, seriousness, citation, homage, play and deeper meaning. The viewer is confronted with ghosts haunted by unredeemed energies. Wiebke Siem does not take anything lightly. She does not call off the shackles of form, but stretches it, cuts it into pieces, mocking and respecting it at the same time.  Brancusi, Giacometti and Max Ernst as well as Wilhelm Busch and Oskar Panizza keep haunting the world she creates with her figures. Her characters move in spheres beyond concepts of male and female. All boundaries are dissolved. What remains are forms, and references, reorganized by Wiebke Siem, according to the classic codes of aesthetics.   The graphical and abstract element of her work is accentuated by the black paint finish. It creates the impression of wafting lines rather than materials. The figures see-saw between two- and three-dimensionality, thus increasing the ambivalence with regards to form and content.