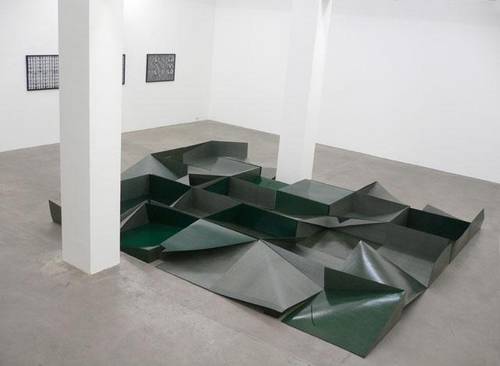 Finds from the street , visual impressions from the urban centers of globalization, the everyday human dimension of living in big cities are the common subject of the works by Olaf Holzapfel (Dresden/Berlin, born 1969), Chris Johanson (Portland, OR, born 1968) and Gedi Sibony (New York, born 1973) that are on display at the exhibition FUNDSTÜCKE UND TRANSIT at Johnen + Schöttle gallery.
His various trips to Japan and India, an extended residency in New York became significant experiences for Olaf Holzapfel. His particular attention for surfaces, the conditions of their joints and their potential of creating autonomous spaces are deduced from these experiences and it leads to intricate geometrical complexities that form spatial installations made from cardboard, soft PVC and plastic ropes as well as it dominates his paintings and large-size digital prints which co-relate to the contemporary multi-focal notion of reality.
Olaf Holzapfel is reflecting the polarity between the extreme complexity of the cityscape and the dominant representation of its reality through advertisement and computer games by condensing visual clusters. The extension of most of his works within the actual space respectively their intense structures disables the viewer from grasping the visual impact of the works at once. One has to walk around the installations for recognise their complexe structures, the vast and meticulous details of his digital prints can be perceived only in sections.
Striving to transpose the multi-layered intensity of the contemporary notion of reality to a coherent aesthetic statement Holzapfel, Johanson and Sibony make use of materials and images deriving from the context of urbanity and reflecting the social effects of modern life as well as the pressure it is putting on individuals’ lifes.
Chris Johanson is focusing on individual perception within the dominance of an anonymous mass culture. For doing so he exploits the aesthetics of comic strips and the reality of Southpark as well as visual effects that remind of simplified Op- and Pop-Art. He thus gives an ironical but at the same time compassionate comment on the tensions between individual and society, between self-esteem and adaptation.
In contrary to this Gedi Sibony is creating extremely fragile, abstract sculptures from materials as cardboard and plywood, carpet and sticks, metall and sandpaper, both formally as well as statically reduced to their existential limits. The precarious balance of these sculptures, the scracely remarkable traces of their materials’ treatment and their origin from construction and demolition sites testify their volatileness as do the gently sprayed wall paintings of Gedi Sibony. He, too, is aware of the inherent potentials of materials and surfaces for evoking an image and similar to the urban sceneries of Chris Johanson and the complexe representations of Olaf Holzapfel the fragmented constructions and ephemeral traces of Gedi Sibony’s work are poetic metaphors for establishing an existence within the context of a continuous transit situation.