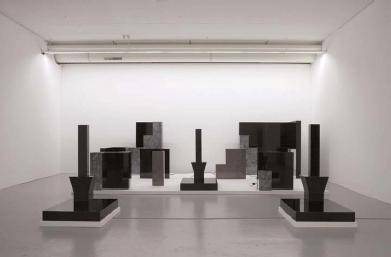 DELIA GONZALEZ & GAVIN RUSSOM
“For I was like one dead, like a small ghost, a little cold air wandering and lost”

Jousse Entreprise is very pleased to present the first solo exhibition of Delia Gonzalez & Gavin Russom in France. Currently based in Berlin, the American duo work collaboratively in a variety of media and have had numerous solo international exhibitions and performances.
Gonzalez & Russom’s new suite of minimal black sculptures extends their ongoing exploration into the possibility of using metaphors derived from contemporary art sources ranging from film, architecture, literature or the cultures of glam and disco, combined with theatrical staging and performance, to create an environment for authentic spiritual experience and transformation. Addressing the gap between mystical phenomenon of the natural world as summoned through the occult, Afro-Cuban culture, spiritual rites of initiation and others, and the contemporary urban landscape of culture, their sculptures and installations are frequently composed of reduced modular formica elements embedded with electronic music synthesizers and more recently with lights. These highly produced minimal entities thus propose a synthetic re-creation of natural forces – the potential for transcendence - which are conceptually and actually evoked through staging, sound and light although not physically present.
“For I was like one dead, like a small ghost, a little cold air wandering and lost” treats the myth of Orpheus and his descent into the realm of the dead, proposing a possible scenography for Luigi Rossi’s 1647 baroque opera production of the myth. Tying this theme of the initiate’s journey together with the significance of the exhibition’s date on the celestial calendar (between the autumnal equinox and Samhain, the Celtic new year which is celebrated on the 31st of October and which is considered the period when the veil between the living and the dead is at its thinnest) the installation proposes the possibility of gaining individual power and insight from moments of darkness and emptiness Within the context of an exhibition, sculptures endowed with metaphorical reference to mythical or occult sources often double as interior objects such as vanity mirrors or chaise lounges, confounding notions of the ritualized and the domestic. In the current exhibition, for which the gallery is painted black, a vaulted formica archway which is Orpheus’ gateway to the underworld also doubles as a throne. Recessed niches in the formica surface encase florescent lighting, light – as in a lightning field or the sun – being a primordial force and reminding us of the dual nature of these formal constructions which function both as sculptural elements of a stage set as well as synthetic re-creations of actual natural forces. Hypnotic loops of sound emitted from sleek metal synthesizers set into the surface of modular black formica fountains underscore the artists’ search for contemporary material and ambient forms to create an environment in which human transcendence is possible.
Aside from producing sculpture, installation, music and performance, Gonzalez & Russom also create meticulously formed talisman figures - red sequined grapes, an ancient symbol of fertility, or replicas of Afro-Cuban deities, cone heads with cowry shells for eyes and mouths - as further re-enactments of the sources of magic on earth. They also, independently, produce drawings and collages, and together founded the performance groups Fancypantz and Black Leotard Front with artist Christian Holstad in New York. They have several CD’s out on the DFA label in New York. . Gonzalez & Russom have been working collaboratively since 1998. Recent exhibitions include ”Ceremonies of Consummation” at Peres Projects, Los Angeles, "While Interwoven Echoes Drip into a Hybrid Body...” at the Migros Museum, Zurich, "I Feel Love," Galleria Fonti, Naples, Italy and "No Ordinary Sanctity," curated by Shamim Momin in conjunction with Galerie Thaddeus Ropac, Kunstraum Deutsche Bank in Salzburg. In November 2006, they participate in “Music is a Better Noise” at P.S. 1, NYC, curated by Bob Nickas. Their work has been featured the New York Times and Artforum magazine, among others.