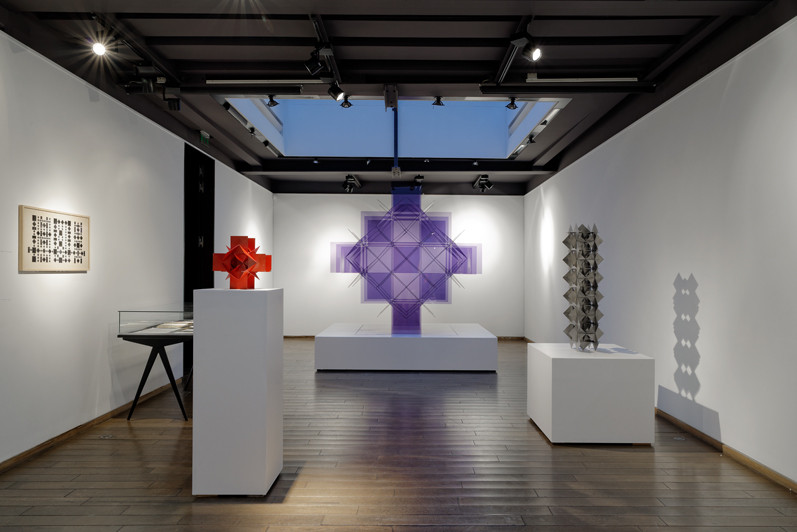 The works that Francisco Sobrino (born 1932) created as of 1958 are a key episode in perceptual art, a movement that was the subject of the recent Dynamo exhibition at the Galeries Nationales du Grand Palais. Sobrino co-founded the GRAV (Groupe de Recherche d’Art Visuel) in Paris in 1960 with a handful of artists such as François Morellet or Julio Le Parc, developing a minimalist visual language that has the particularity of unfurling in the real time and space of experience.

As the start of a long-term collaboration between the Sobrino Archives and Jousse Entreprise, the group of historical works presented in the gallery on Rue de Seine and in the Tuileries Gardens as part of the FIAC external programme focuses on the artist’s “towers”. These rhythmical and often vertical compositions, which were prefigured in some of the artist’s paintings and engravings, are sculptures formed by identical planes – multiple square Plexiglas or metal sheets that slot together – which capture, filter, dislocate and evacuate their immediate environment (and its fortuitous variations) and make it a constitutive part of their appearance. Whether viewed as authoritarian or threatening, furtive or sensual, these razor-sharp totems melt with their surroundings – spectators included – while they follow in the tradition of Constantin Brancusi’s Endless Columns, Naum Gabo’s mechanistic structures and the construction games invented by Charles and Ray Eames (House of Cards, The Toy). Developed from 1960, they come long before the modular or combinatory systems of Hélio Oiticica, Donald Judd, Robert Morris, Robert Smithson, or Sol LeWitt, Charlotte Posenenske and Dan Graham, and prefigured many more recent works by Jeppe Hein, Olafur Eliasson or Timo Nasseri.

Highly reductionist as it may be, Sobrino’s art is neither concrete, lofty nor introspective. On the contrary. Inspired by the phenomenology of perception, here the most basic geometric form is above all the liberated playground of the visible and a tool to mirror our own gaze. In vivo, each work is a veritable trick on the eyes that establishes an unsettling relationship with its viewer: are we looking at the works, or is it the other way around?