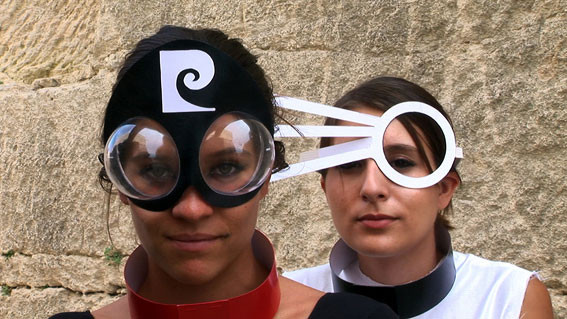 Jousse Entreprise is delighted to present the first solo exhibition in France of London-based artist Gail Pickering. Her practice includes performance, live installation, video and drawing. Central to her work is the use of ‘actors’ seen as protagonist or collaborator, they are selected for specific personal, professional or physical qualities. They participate in often-elaborate constructions, in which the work assumes a Brechtian notion of reflexivity deliberately undermining the fusion of actor and role.
‘Hungary! And Other Economies’ is a three-part work whose main component the projected film ‘Hungary!’ is housed within a large-scale installation. This in turn functions as both a framing device and prop for the specially commissioned performance ‘Push-Ups’, produced as an extension to the video work the performance will feature professional porn actors wearing costumes based on early Pierre Cardin designs.
In ‘Hungary!’ (2006) Pickering takes a group of hired porn actors from Marseille to the Marquis de Sade’s Chateâu in Luberon, a pristine ruin now owned by fashion mogul Pierre Cardin, to enact scenes from German playwright Peter Weiss’ seminal 1963 play Marat/Sade. Dressed in the counterfeit retro-futuristic designs of Cardin, the actors shift between being themselves and their assigned characters, repeatedly taking turns to stage an encounter between the radical philosophies of Marquis de Sade and Jean Paul Marat. ‘Hungary!’ Continues Pickering’s interest in appropriating and reconfiguring political, historical and ideological themes into a contemporary form of tableaux vivant.
Pickering’s work proposes a theatrical construct on multiple levels. Representations of radicalised gestures and subversive cultures across history find their setting at the Chateâu in Luberon, originally used by De Sade himself to stage his plays and regenerated today as the location of Cardin-sponsored theatre festivals. Using the site guerrilla-style to stage her own production, Pickering deliberately allows the working process of her porn actors, who often do not know their ‘script’ before arriving on set, to define some of the narrative of this project. The film version of this performance and its staging within the exhibition space ultimately offer an expanded reflection on performance and the conditions of its production and framing.
Gail Pickering lives and works in London, She graduated from Goldsmiths College MFA in 2001. She has presented numerous performances and live installations, most notably her solo exhibition at Matt’s Gallery, London 2004. Pickering received a LAFVA / Film London award in 2006 and is soon to commence an Arts Council of England International Fellowship. ‘Hungary!’ was produced with the support of triangle Marseille and the British Council.
Gail Pickering has also curated a special programme of historical film screenings relating to some of the interests within her own practice, including films by Raymond Pettibon, John Latham, Richard Kern and Squat Theatre. These will be shown at the gallery on Saturdays 24, 31 March and 7 April.
www.jousse-entreprise.com