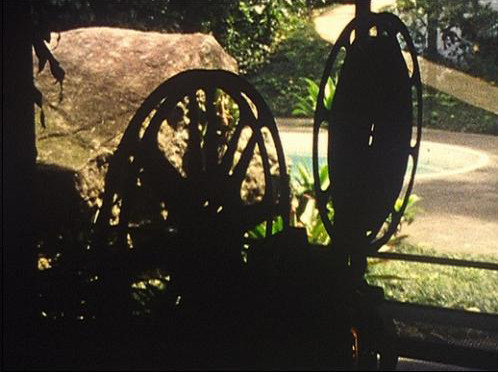 The exhibition Cinelândia offers a circuit involving three super-8 films gravitating around the idea of exploration.

Room 1
Lagerstätte, super-8 film transferred to HD video, 9’30”, silent, 2010
Lagerstätte is situated where experimental punk archaeology document meets 1970s’ tourism film. Auto-filmed over a week in the summer of 2009 in an abandoned stone quarry, Lagerstätte shows Louidgi Beltrame and Elfi Turpin looking for and extracting ammonites, that extinct subclass of molluscs known only in fossil form.
This film is screened with the display stand Mécanique des Roches/Mechanics of Rocks, in which are placed, side by side, an ammonite, a natural spiral form, and a sheet of altuglas, a minimalist modern material, cut out along the partitions of the “areas of undulating glass” designed by the composer Iannis Xenakis for Le Corbusier’s architecture in the Dominican monastery of La Tourette at Evreux-sur-l’Arbresle (1954-1957). The progression of the spiral of the ammonite shells is the equivalent of that of the Fibonacci curve, a series tending towards the golden ratio. The Modular scale, that measurement grid drawn up by Le Corbusier for his architecture, is also based on the arithmetic of the golden ratio. To design the “areas of undulating glass” at La Tourette, Xenakis used the Modulor proportions, which he also did for the Metastasis composition, produced after he had left Le Corbusier’s studio.
The diptych Tecnicamente Dolce compares the half-erased cover of Antonioni’s eponymous script, which never became a film, with the figure of a woman reader photographed back-lit in a tropical interior.

Office
Katashima Torpedo Base is the print from a slide made at dawn in Omura Bay, near Nagasaki. The frontal image frames this military lookout post - a geometric island of concrete—like a minimal sculpture. This disused base once belonged to the Sasebo military naval complex. It has by turns been an observation post for torpedo tests, then used for training underwater kamikazes before the outbreak of the Second World War

Room 2
Nakanoshima, the Garden Above the Sea, super-8 film transferred to HD video, 11’, 2012.
The film presents the exploration by subjective camera of Nakanoshima, a tiny rocky isle off the coast of Nagasaki, where the subtropical vegetation covers the ruins of the landscaped park built in the 1960s, and the remains of an early 20th century Buddhist cemetery. This work refers to an older video (not on view in the show) titled Gunkanjima, and shot during the same journey to a nowadays deserted factory island, lying 500 yards from Nakanoshima.
The island of Nakanoshima is here regarded as the negative space of Gunkanjima. It was in fact its cemetery during the period when the coal mines were in operation on Gunkanjima. Its function as a cemetery was coupled with that of a recreational park for Gunkanjima’s inhabitants from the early 1960s to the mine’s closure in 1974. The highly mobile super-8 camera records the island’s topography and monuments. The sound track consists of a simple commentary by the artist, describing his progress on the island, and trying to establish a link between his discoveries (monuments, constructions, vegetation...) and his incomplete knowledge of its history, along with that of Gunkanjima.

Room 3
Cinelândia, super-8 film transferred to HD video, 30’30”,2012
Cinelândia is the outcome of a joint project involving Louidgi Beltrame and the curator Elfi Turpin. Cinelândia, which means ‘land of cinema’ in Portuguese, borrows its title from a neighbourhood in downtown Rio de Janeiro, whose heyday occurred in the 1930s, when it housed the city’s cinemas.
Cinelândia was shot in 2010 in the Tijuca jungle which lies above Rio de Janeiro—the world’s largest urban forest.
Beltrame and Turpin filmed the Casa de Canoas, the only glass house ever designed by Oscar Niemeyer, a must exercise for any modernist architect. Planned in 1951 and completed in 1953, it was designed for the architect’s family, but was only lived in for a few years. The thereafter deserted house, whose upkeep was nevertheless maintained, has been turned into a bachelor machine, somewhere between architecture and sculpture. As the years have passed, the carefully laid out and organized garden has been overtaken by the Atlantic mata.
This glass pavilion is here seen as a space of projection, that of the architect’s projects, and the fiction which is projected over the jungle and its mythologies.
Beltrame and Turpin are installing a device in it—a 16mm projector which lives in and activates the house which is then filmed and meticulously observed as an ecosystem in relation to its environment—structure, fauna, flora, climate. These fiction-generating elements are brought together in a prismatic way.
So the house plays host to stories. The one forming the film’s main outline is the voice-over reading, in Italian, of fragments of Tecnicamente Dolce, an Antonioni script dating from the 1970s.
This script, which never became a film, describes the Amazonian escape of an Italian political journalist—an existential screenplay in which T, the reporter, and S, the young anthropologist, get lost in the jungle after a plane crash. The script of Tecnicamente Dolce ends on the jungle’s edge with a view over the city of Brasilia in the distance. This is the only concrete point of contact in Cinelândia between the film-maker Antonioni and the architect Niemeyer. Other
fragments of stories connected with the forest and its myths are associated with the script. The voices taken from J.G. Ballard’s The Crystal World, from an interview with Duras, and also from Cannibal Metaphysics by the Brazilian anthropologist Eduardo Viveiros de Castro, thus increase the number of viewpoints and short-circuit the narrative.
www.jousse-entreprise.com