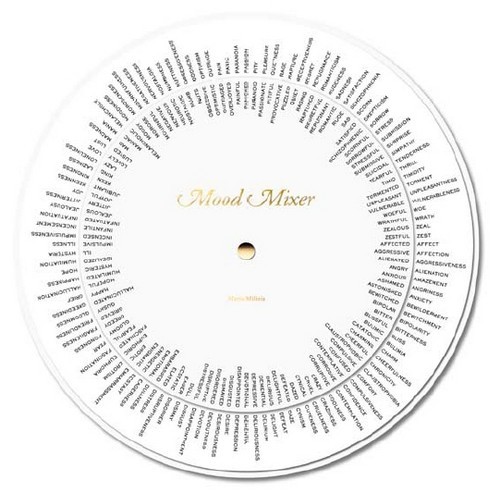 On 5 September 2009, at the Galerie Jousse Entreprise, Mario Milizia will open a solo show with the Mood Mixer project.
As the second part of a research project embarked upon with the Style Mixer in 2003, Mood Mixer is a kind of game, as well as a research tool. Consisting of two shiny white cardboard disks which pivot on one another, it can generate 15,000 moods by combining emotions, feelings and sentiments, all apparently contradictory and alien to each other. These combinations, at first glance totally weird, not to say disquieting, nevertheless conjure up on the one hand real contemporary phenomena and, on the other, new possible conceptual models: “catatonic satisfaction”, compulsive regret” and “stressful delight” are just some of the suggestive states created by the Mood Mixer.
Mario Milizia thus once again explores the concept of linguistic “hybridization” in the contemporary culture and aesthetic, as he did back in 2003, for his previous solo show at the Galerie Jousse Entreprise. The Style Mixer which he then presented—same graphic image, but unrelentingly black—made it possible to randomly combine musical genres, architectural styles, and art movements, giving rise to at times credible, but usually ironical and dissonant associations. It is not actually easy to imagine what a “Minimal Louis XIV” style, or “Medieval Hip-Hop” might be.
Mood Mixer borrows and develops, in a present-day graphic and ironical key the research of Robert Plutchik, an American psychologist who, in 1980, proposed in his book Theories of Emotion a classification of eight basic emotions of varying intensity. In developing a threedimensional combinatory model, Plutchik demonstrated that the combinations of these eight basic emotions give rise to eight other emotions. For example, by combining feelings like “ecstasy” and “admiration”, you get “love”. In acknowledging the American researcher, but not satisfied, Milizia proposes, with Mood Mixer, a new range of possible and impossible moods, in their various shades, moods that have either already been experienced, or are still to be.
A 21 minute video titled Jubilant Halucination (one of the 15,000 possible combinations) accompanies the presentation of Mood Mixer.
By using fragments and images of an “anonymous” live concert, Milizia puts together a video for which, with the help of a sound technician, he re-writes the sound track. The montage of ten pieces by different artists, from Madonna to Black Eyed Peas, and from Katy Perry to Armin van Buuren, permits the artist to create a “real” pop concert. The images recount a “live” event, in a hyper-realistic way, an event which has never taken place, and whose goal is to trigger a short-circuit between the real and the artificial, by provoking true emotions.