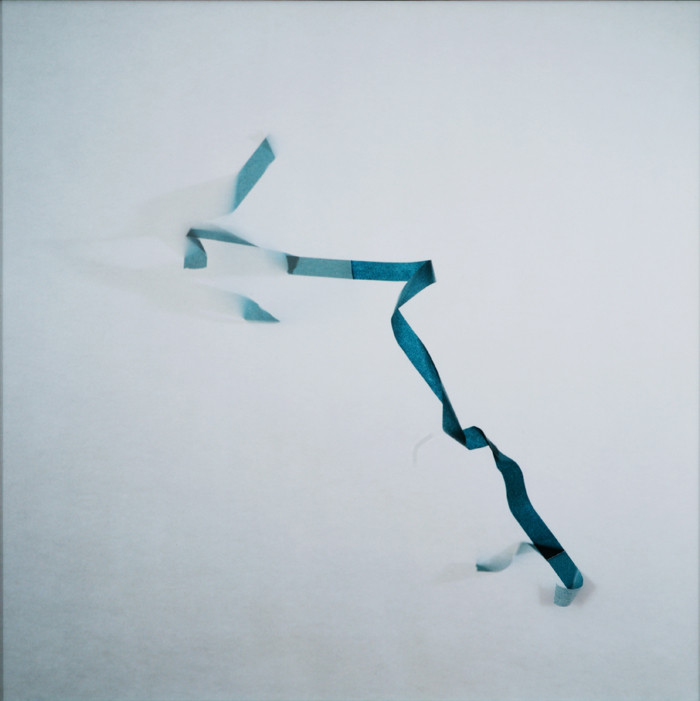 The six artists brought together in set-Up, all make photographs through revisiting the studio as a place for creating images. each employs different approaches and strategies, drawing on areas such as performance, anthropology, and art history to generate images that are visually arresting while tantalizingly evasive. photography in the United states has developed a new and fresh focus with some artists interested in exploring the technical limits of their materials and recording the process manifest in making a photograph, while others are interested in creating studio based situations, or still lives, as a way of making new and provoking images.
set-up speaks not only to the nature of the creation of these images, but also to a sense of willful misdirection.
Sam Falls straddles both of these tendencies testing the limits of what a photograph can be with works made in the californian sun in which the trace of an object is bleached into dyed cloth, while others use the conventions of a studio and camera to index different methods of describing a subject. In these fruit and vegetables are arranged then a digital photograph is taken which is sampled to create swathes of color which are added to the image before it is printed. Finally the fruit and vegetables are cut in half and used to print ink onto the surface of the photograph, shifting it from image to object, and back again.

Elisa sighicelli continues her, often gently humorous, investigation into the poetics of light and space with a return to the studio after many years traveling the world taking photographs and shooting video in exotic locations. here she chose to photograph mundane materials such as tape, ribbon and paper, but keeping light and its effects as her subject. these new images possess a spare elegance that often disguises their components and questions what is real, photographed and re-photographed in an exercise in contemporary trompe l’oeil.

Corin Hewitt similarly uses mundane materials in the making of his photographs. these are created and emerge as part of durational performances staged within galleries and museums.
at the whitney Museum of american art in 2009 he constructed a fully enclosed raised workspace with a crawl space hidden below. throughout the exhibition he constructed still lives using materials both grown and bought that he photographed before recycling, along with the resulting photographs, to stage the next image. In so doing he created an ongoing record of his activity as well as an intimate examination of transformance.
Michele abeles uses a restricted number of everyday items (including a male nude) to make elegant and compelling tableaus. each element’s identity is very clear and is in a way emblematic of itself. while very formal, each photograph both suggests and evades meaning, as if a series of clues is constantly being reshuffled, the elements redeployed and recast. Her stark graphic images are made in camera, immaculately composed with a crisp depth of field that speaks of the classic photographer’s studio with its eternal white backdrop.

Kate Costello’s series kiki and Me refers to the famous parisian model and muse kiki de Montparnasse. costello collaborates with models in the creation of studio photographs in which they pose in front of a series of painted backdrops. the works reference, through the quotation of pattern and palette, a historical period that is both supported and questioned through the pose of the nude and the transitory nature of scene. often augmented through a sculptural intervention in the space, her photographs create a sense of uncertainty through merging historical lineage with an improvised theatricality.

Matt Lipps appropriates images from horizon, an international arts and culture magazine.
Focusing on the issues from the 1950s and 60s he playfully explores what happens to the meaning of certain objects and images when they are remixed into new systems and categories – altering both content and context. collected together in their new groupings clearly appearing as variously sized cutouts they are wittily arranged and dramatically lit as if players on a temporary stage who can at any moment be reconfigured.

Stephen Hepworth is a british curator who has been based in the Us since 2007, initially running the University art gallery at the University of california san Diego before moving to New York in 2009. previously he was a curator at bloomberg space in london and Director of the Jerwood gallery (1998-2001) and the tannery (1995-97). he has curated over 80 exhibitions. Independent projects include Into My world: recent british sculpture at the aldrich Contemporary Art Museum in Ridgefield, Connecticut (2004) and the touring exhibition tailsliding (2001-03) for the british council. In the 1990’s he exhibited as an artist in Paris with solo exhibitions at galerie gutharc ballin (1992) and galerie Jousse seguin (1996).
www.jousse-entreprise.com