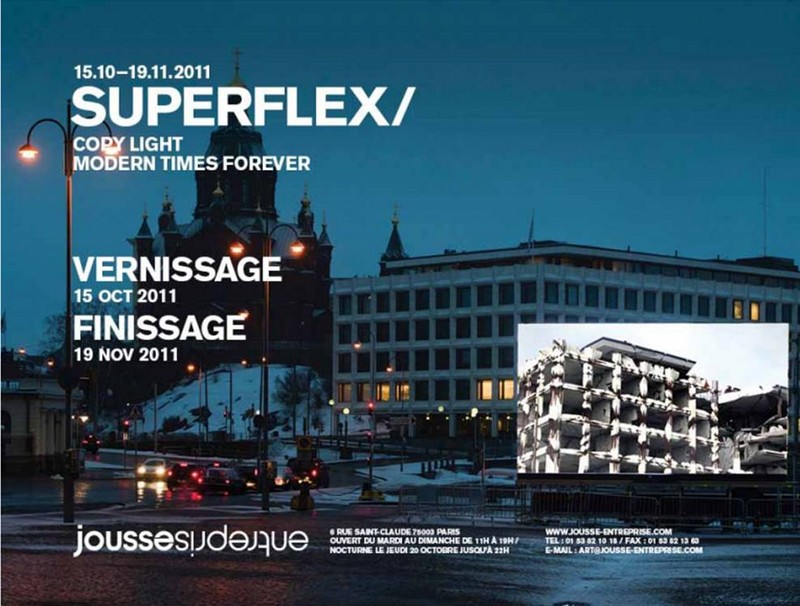 Philippe Jousse is delighted to invite you to the opening of the exhibition of the danish artists SUPERFLEX on saturday 15 october 2011 from 4pm to 9pm. It will be their second solo show presented at the gallery.
The Danish artists’ group (Jakob Fenger, Rasmus Nielsen and Bjonstjerne Christiansen) has been working together since 1993 on a series of projects related to economic forces, democratic production conditions and self-organisation.
The artists have examined alternative energy production methods and commodity production in Brazil, Thailand and Europe in their projects, which both expose and question the existing economic structures. SUPERFLEX describe their projects as tools, as proposals that invite people to actively participate in and communicate the development of experimental models that alter the prevailing economic production conditions. The projects are assisted by experts who bring in their respective special interest, these tools can then be further utilized and modified by their users. Over the past years, SUPERFLEX have achieved international recognition for their projects. The Danish artists had solo exhibitions, among others, at the Kunsthalle Basel in Switzerland, Van Abbemuseum-Eindhoven, Louisiana MuseumDenmark, Atheneum Museum-Helsinki, Modern Institute-Glasgow etc, Gangju Biennal, Korea, Venice Biennale etc...
Their work is part of important private collection.
MODERN TIMES FOREVER: A film about what would happen to the Stora Enso building as an architectural and ideological symbol, over the next few thousands of years if only time would affect the building. The film was shown in Helsinki Market Square on a 40m2 LED screen, so that one could see the original building simultaneously with the building in the film. In the film the building changed all the time. The film lasted ten days, i.e. the work lasted as long as its exhibition period. This continuous exhibition period meant that the film could be watched 24 hours a day for ten days. At Jousse Entreprise the film will last 1 month, the period of the exhibition; Made for IHME Contemporary Art Festival. Produced by The Propeller Group. Credit: Pro Arte Foundation.
COPY LIGTH: COPY LIGHT seeks to explore the borders between a copy and its original – when is a copy a copy, and when does a copy become a new original? COPY LIGHT wants to communicate the problems of the copyright system. The motifs on the cube shaped COPY LIGHT are translucent, transparent or paper photocopy representations of well-known lamp icons. The cube design enables the user to choose an image of a desired lamp design. COPY LIGHT was initially developed within the context of COPYSHOP, an ongoing project initiated by Copenhagen Brains & SUPERFLEX, 2005.
www.jousse-entreprise.com