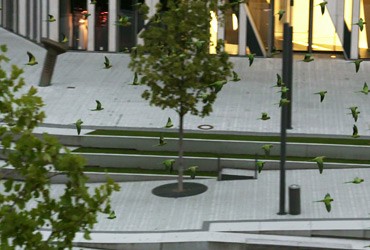 Between 1799 and 1804 a young naturalist, Alexander von Humboldt (1769–1859), visited the American continent for the first time, making two expeditions. The most adventurous section of his journey was the trip down the Orinoco to the Rio Negro in Venezuela. At the time, his report on this journey laid the foundations for a holistic way of looking at nature – one that was way ahead of its time. Von Humboldt was the first researcher to point out how the forces of nature, both animate and inanimate, work together. In 1853, these first chronicles of the New World were published in a special edition entitled “Jaguars and electric eels”, an excerpt from the "Personal Narrative of a Journey to the Equinoctical Regions of the New Continent".

The largely media-based works in the collection of the same name on show at the JULIA STOSCHEK COLLECTION in Berlin describe a reality that no longer distinguishes between naturalness and artificiality but sees things as a whole and as equals. Starting with the idea of the kind of ecology that focuses not only on natural circumstances but also on the economic and socio-political situation, as well as on technological progress, the exhibition investigates an alternative interpretation of anthropology and zoology.

Accordingly, the selection of works evidences the search for our evolutionary roots, looking into questions of indigeneity, of hybrids and synthetic forms of life, the migration of the species, and that of our constantly changing perceptions of reality due to all kinds of different influences.

As the various artists’ contributions to the exhibition illustrate, our modern life science questions both the line between naturalness and artificiality and the ontology of objects of all kinds. The different complexes of subjects move within that intermediate space between nature and art, their various systems offering new approaches to interpretation and methods of classification.
www.jsc.berlin