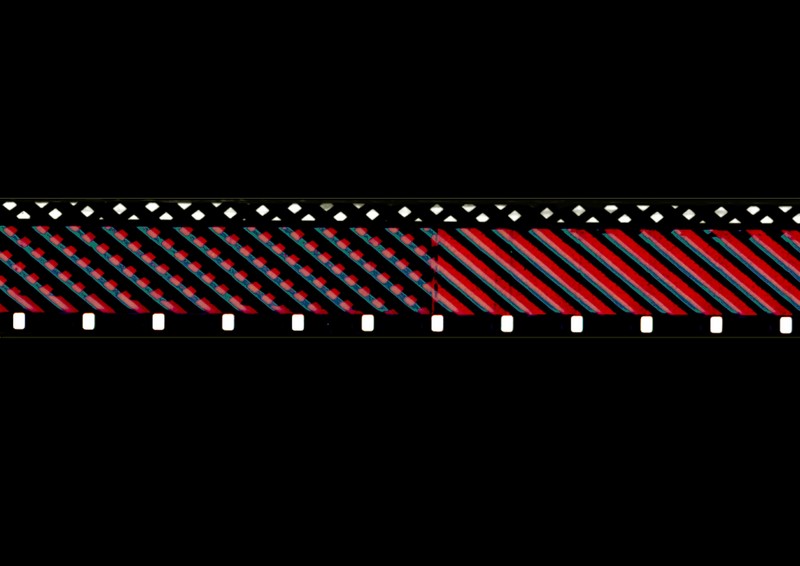 The exhibition focuses on the three artists Matthew Lutz-Kinoy, Lisa Oppenheim and Lis Rhodes. In their own way, all three artists push boundaries set by written definitions to create a limitless space in which creation is set free, in order to enable themselves to disconnect set rules from the collective interpretation. In the space they create, one can re-interpret structures to create new apprehensions.
As soon as we write down what we think, the reality of our thoughts are lost.
The moment when one defines an idea, the definition will no longer be applicable. This is why ‘every serious man in dealing with really serious subjects carefully avoids writing’.

Lis Rhodes
The film Dresden Dynamo (1971) by Lis Rhodes (1942, London) is the result of experiments with the application of Letraset and Letratone onto clear film.
These chemicals create graphic images on the material, which are used to ‘read’ the sound that they reflect. So what you see is what you hear and what you hear is what you see. Rhodes added color to the film to create an abstract contradiction.
The artist investigates how language can produce perceptions and interactions. Language holds its power not just in its existence, but also in its elusiveness.
As soon as you will find words for what seems inapprehensible, some of the unintelligible will get lost in the visualization of the work.

Matthew Lutz-Kinoy
The work of Matthew Lutz-Kinoy (1984, New York) is colorful, multi-disciplined, imaginative and exuberant. The artist describes that ‘the body is inextricably intertwined in the process of communicating ideas’. This explains why performance takes an important role within the context of his work.
The work on view is a newly constructed installation, consisting out of a painted canvas and a projected image showing a ‘save the date’ for the next performance by the artist. This is a continuation of a series that started with during the exhibition ‘Beyond Imagination’ in the Stedelijk Museum Amsterdam in September 2012

Lisa Oppenheim
The works of Lisa Oppenheim (1975, New York) balances between appropriation and reconstruction, in which substitutions and omissions are applied to the photographic and filmic records. Oppenheim constructs tension between an archival impulse on the level of research as well as revising the received information by a particular photographic process.
The work ‘Véritable Hollandaise’ is a recent series of photograms by the artist.
Oppenheim creates a dialogue between the reproducible medium of photography and the process of the textile batik, which was originally handmade. Using the now mechanically produced textile she makes one unique photogram.