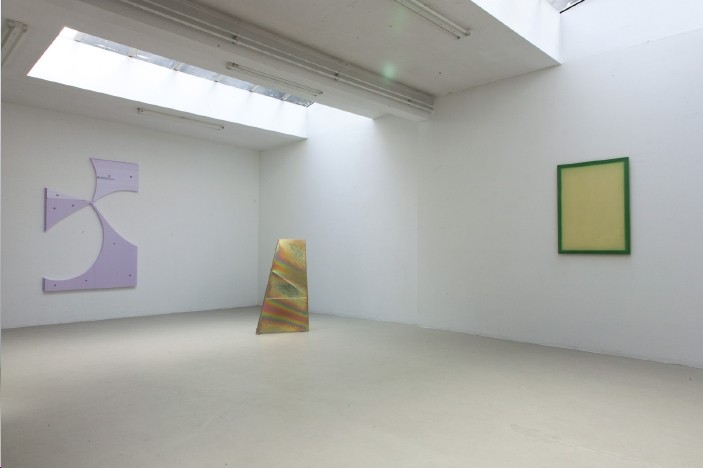 In a quiet residential street, about a 15-minute walk from Tilburgcentral station, Just Quist's studio is located in a former classroom ofa small elementary school. A teacher answers the door, and when I tellhim whom I'm there to visit, he vaguely points the way while trying tocontrol his students running to the playground outside. It appears to be'somewhere in the back' so I pass through the lobby that houses somewooden furniture and books, walk through the folding door and end up ina hallway that leads to a small gymnasium. I feel like the big, friendlygiant in these miniature surroundings and I can't help but wonder ifthis unusual environment affects the artist and his work; Schools areoften places of memory, but not necessarily of reflection. When I knockon the door, I'm once again reminded of Quist's impressive stature. Heoffers me tea that he prepares in his tiny studio kitchen where the sinkhits his tall frame on knee level, and we start talking.

Rene Joffe, what will be the show's title, comes to the surface quiteliterally in several moments throughout the selected pieces. Theinitials are turned into a work themselves or intervene other existingpieces. I catch myself wondering about their symbolic meaning when Irealize they might just 'merely' be a random assortment of letters thatautomatically manoeuvre your mind into thinking this has to have areference. Some works are lying on the floor, others hang on the wall.There are monochrome geometric paintings, either in a rectangular ordiamond shape of which some are plain steel and others are brightlycoloured and textured.

There's the eye catching grid Rene Joffe (2014) composed ofexpanded passivated steel that has the gradual color effect of arainbow, and geometric shapes cut out from rough building material in amost unexpected periwinkle (ZT, 2013). In case of the latter, the cutoutsseemingly pull the piece partly into the wall while itsimultaneously implies the outlines of a non-existing frame. Theausterity is skillful and cunning though I feel I'm slowly but surelyfalling into the trap of Quist's geometric simplicity. This artist is atrickster; letting his work ostensibly speak a formal, direct languagewhich is sometimes piercingly abstract, yet sparking wonder in small andunanticipated twists. What could be stern is softened with lightness,humour even. There's another grid with a centralised silhouette ofSnoopy (ZT, 2013) and a grid with its corners covered with trianglepieces of cardboard (ZT, 2013). In case of the former, Snoopy isexemplary of a figural representation that deteriorated in its symbolicsignificance, turning it from meaningful and relevant to a 'classic'.This transitive approach to imagery demonstrates Quist's clever way ofdealing with the unavoidable transformation of symbolism andrepresentation. Furthermore, Snoopy feels particularly fitting in thisschool setting; he is known to speak solely in thought clouds ratherthan actual spoken words, just as an adolescent's way of going throughthe world where dreaming, rather than verbalizing, overpowers.The latter provides a similar subtle tenuity where the piece could haveeasily folded into the autonomous minimalistic game, were it not for theaddition of the cardboard. Instead, the artist's gesture puts thispotential monumental quality into perspective, sobering up his artisticlanguage and consequently an overthinking viewer.