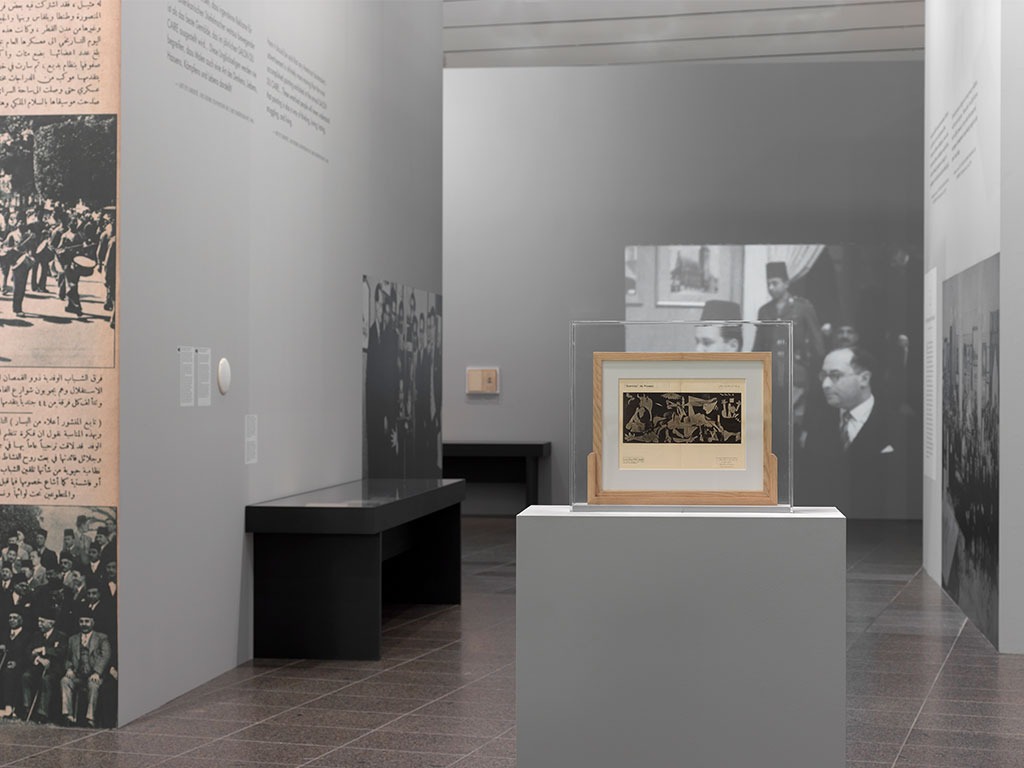 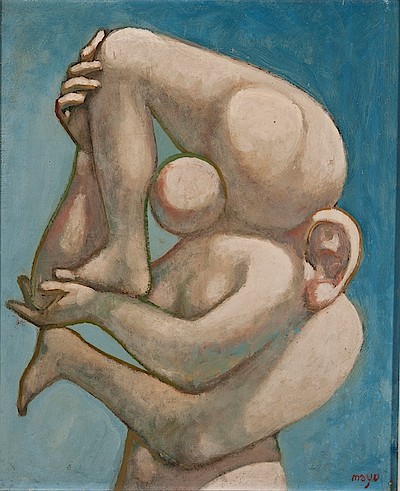 Mayo, Portrait, 1937, oil on canvas, 46 × 36 cm, European Cultural Centre of Delphi, Greece
This is the first comprehensive museum exhibition about the largely forgotten Cairo based group Art et Liberté ("art and liberty", "jama’at al-fann wa al-hurriyyah"). The exhibition presents more than 200 works from around 50 collections in 12 different countries, including paintings, works on paper, prints, photographs, films, books, and archival documents. At the dawn of World War II and during Egypt's colonial rule by the British Empire the surrealist collective of artists and writers was engaged in its defiance of Fascism, Nationalism and Colonialism.

Through their works, artists such as Hassan El-Telmisani, Inji Efflatoun, Fouad Kamel, Amy Nimr, Samir Rafi, and Ramses Younane amongst others, gave voice to the group's political, aesthetic and social commitment. The collective's main driving force was the Cairo-based poet and literary critic Georges Henein, the son of a diplomat and a cosmopolitan personality who had been closely associated with the Parisian Surrealists grouped around André Breton from as early as 1933. Surrealism, with its often provocative, always poetic, subversive, anarchic, and intimate amalgamation of poetry and painting, resonated very strongly in Cairo where it stood firmly in its fight against political repression and for the ideal of human freedom.

This exhibition features a direct link to the Kunstsammlung Nordrhein-Westfalen: the Cairo-based artists' collective explicitly declared solidarity with many of the classical modernist artists who were persecuted by Hitler, Mussolini, and Franco. Some of these artists are represented today in the permanent collection. Alluding to the defamatory and propagandistic National Socialist exhibition devoted to "Entartete Kunst," the Art et Liberté group headed its founding manifesto of December 1938 with the words "Long Live Degenerate Art!" and demanded: "Together, Let us overcome the Middle Ages that emerges from the heart of the Occident."

This overview of the multifarious activities of the Art et Liberté group serves as a prologue to the extensive presentation Excentric Modernism, planned for autumn 2018 at the K20, which investigates manifestations of non-Western modern art on various continents in the framework of the research project "museum global" (2015 – 2018). As the first artistic tendency of modernism, the impact of Surrealism was international in scope. With its redefinition of Surrealism, Art et Liberté in Cairo established a contemporary pictorial and literary language that was equally rooted in both, global and local realities.

Curators: Sam Bardaouil and Till Fellrath (Art Reoriented, Munich and New York), Doris Krystof (for the Düsseldorf station of the exhibition).
www.kunstsammlung.de