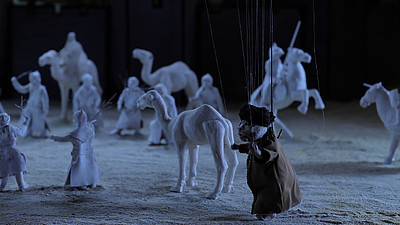 Videostill aus: Wael Shawky, Cabaret Crusades II: The Path to Cairo, 2012, Video, Farbe, Ton, 58‘, Courtesy the artist and Sfeir-Semler Gallery Beirut/Hamburg
In his first major museum exhibition in Germany Egyptian artist Wael Shawky (*1971) presents his film trilogy Cabaret Crusades, in which marionettes cabaret-like reenact the history of the medieval crusades. Shawky’s multiple awarded films explore the ways in which projections and manipulations of the foreign, as well as confrontations with it, actually function. What lies behind the multi-faceted mechanisms of constructing and telling history? While the first two parts of Shawky’s Cabaret Crusades will be expansively screened at Grabbehalle from 6 September, the in cooperation with the Kunstsammlung Nordrhein-Westfalen produced third part The Secrets of Karbala will be shot in the same space and premiere at 4 December. Until then Wael Shawky and the Kunstsammlung Nordrhein-Westfalen will transform the exhibition space into a site of art production in an unprecedented way.

In Cabaret Crusades, among the much discussed discoveries at Documenta 13, richly detailed and costumed marionettes perform against fantastical backdrops, reenacting the martial events of the eleventh-twelfth centuries in ways that are simultaneously childlike and gruesome. The scenario of the trilogy is based on the book “The Crusades Through Arab Eyes” (1983), the work of the French-Lebanese author Amin Maalouf (*1949). Shawky mixes together the European perspective, notoriously shaped by fantasy and wishful thinking about the Middle East, with Arab forms of representation. With the historical Crusades, Shawky takes up a theme that seems highly current today, even 1000 years later, in light of current and ongoing conflicts in the Middle East. Today as well, the locations featured in the film, among them Aleppo, Damascus, and Baghdad, are theaters of war. Inevitably, these puppets, controlled by strings, and seemingly set in motion by remote control, pose the question: Who really pulls the strings of history?

In addition to the Wael Shawky and Slevogt/Klee exhibitions, the theme of Egypt is also the pivotal reference point for the program “F3. Approaching an Unknown Future” at the Schmela Haus. Scheduled for autumn of 2014 at this venue are numerous events dealing with the Egyptian situation. Inaugurated at the same time is the Curator in Residence Program, which receives support from the Goethe Institute. The initial phase involves three jury-selected curators from Egypt, who will contribute in productive ways during their visits through their own concerns and themes to the events program at the Schmela Haus, with its orientation toward exchange and dialogue. The Egyptian-themed activities planned for the Schmela Haus, the exhibitions To Egypt! and Wael Shawky. Cabaret Crusades, as well as the production of the third part of Shawky’s Cabaret Crusades Trilogy under the auspices of the Kunstsammlung Nordrhein-Westfalen, promise to offer a multifaceted perspective of the art, culture, and reality of this land, so steeped in history, whose future is currently being renegotiated.