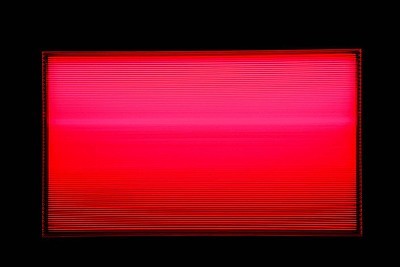 Zilvinas Kempinas, DARKROOM, 2013
Installation, dimensions variable
Courtesy of the artist and Galerija Vartai, Vilnius
Especially for the Kunstsammlung Nordrhein-Westfalen, Kempinas has created a new installation that allows objects and structures – now bathed in red light – to appear as images in the darkroom of an old photographer. This association alludes to a condition that is suspended between dissolution in light and materialization at a secret location. The clarity of these forms, assembled from aluminum and video strips, also evoke experiences of irritation or confusion.

Kempinas – who lives in New York City, and was born in Plungė/Lithuania in 1969 – became familiar to an international public at the latest with the Venice Biennale of 2009. Currently, the Tinguely Museum in Basel is devoting a major survey exhibition to his work. With mastery, this artist unites principles of Constructivism, Minimalism, Op Art, and Kineticism. In 2007, these qualities made him the recipient of the Calder Prize.

Kempinas has realized his most recent work, entitled DARKROOM, in situ in the Laboratory, the project room of the Kunstsammlung Nordrhein-Westfalen, as a confrontation with the proportions and other concrete characteristics of the space.

In his new installation Kempinas invites the visitor to move between his constructions and ponder his process of perception – eventually making viewers reflect upon their relationship to the object.
www.kunstsammlung.de