From Kafka to Kippenberger 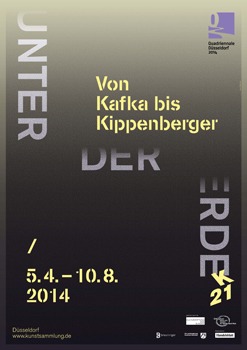 The motif of displacing human habitation below the Earth's surface is one that is closely bound up with the utopias and anti-utopias of the 20th century. The exhibition “Unter der Erde. Von Kafka bis Kippenberger” (“Beneath the Ground: From Kafka to Kippenberger”) will be dedicated to this important theme: At times, this move is associated with visions of hell, at others with the cave as a sheltering and protective abode. The exhibition will focus upon the artistic conception of the underground space which may range from a very concrete form to a more imaginary notion.

Under­ground spaces were charged with emotional power by the traumatic experiences of two world wars. While buildings on the surface are subject to attacks, the spec underneath the earth grants protection. Representative are Henry Moore’s drawings of people seeking shelter from air raids in the tunnels of the London Underground during the “Blitz Krieg”. In his Shelter Sketchbooks and drawings he depicts the characteristic of shelter and safe-keeping during the war.

The underworld often functions also as a metaphor for the human subject in modern times. The link between the unconscious and the physical setting of the basement found in Carl Gustav Jung's early 20th-century dream interpretations was reflected in a number of important works of art.

A special function for the major works of Modern and Contemporary art will succumb to the unfinished short story “The Burrow” (1923-24) by Franz Kafka. Visitors receive a copy of the short story with drawings by Roni Horn, published for the first time as an individual paperback by Fischer Verlag.