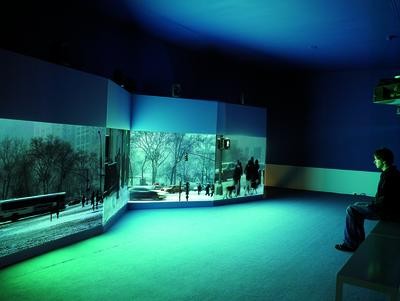 Eija-Liisa Ahtila, The Hour of Prayer, 2005
Installationsansicht im Two Rooms, Auckland, 2006
Courtesy Marian Goodman Gallery, New York und Paris
© Crystal Eye – Kristallisilmä Oy, Helsinki, 2008 / VG Bild-Kunst, Bonn 2008
Foto: Andrei Jewell
Beginning in the mid-1990s, the filmic depictions of the condition humaine created by Eija-Liisa Ahtila (born in 1959 in Hämeenlinna / Finland) have contributed substantially to the emergence of a new narrative art, and to the type of large scale cinematographic installation without which the contemporary art scene would be inconceivable.

Alongside earlier works, this exhibition – which has been conceptualized as a survey – features three new film installations which have not yet been shown in Germany: The Hour of Prayer (2005), Fishermen / Étude no 1 (2007), as well as Ahtila’s latest and to date largest installation Where Is Where? (2008).

Crystallized in this exhibition as the principal element of Ahtila’s films is the interlocking of psychology and space, of text and image, and also of objective reportage style and surrealist special effects. But a shift of accent is observable in this overview, which surveys the production of the past 15 years: in the newer works, the fictional documentary presentation of human drama in a Finnish milieu moves toward a more generalized or global perspective.
In the fusion of urgency and detached reflection so characteristic of Ahtila, the latest works are devoted with renewed intensity to abstract existential themes such as togetherness and exclusion, childhood and violence, life and death.