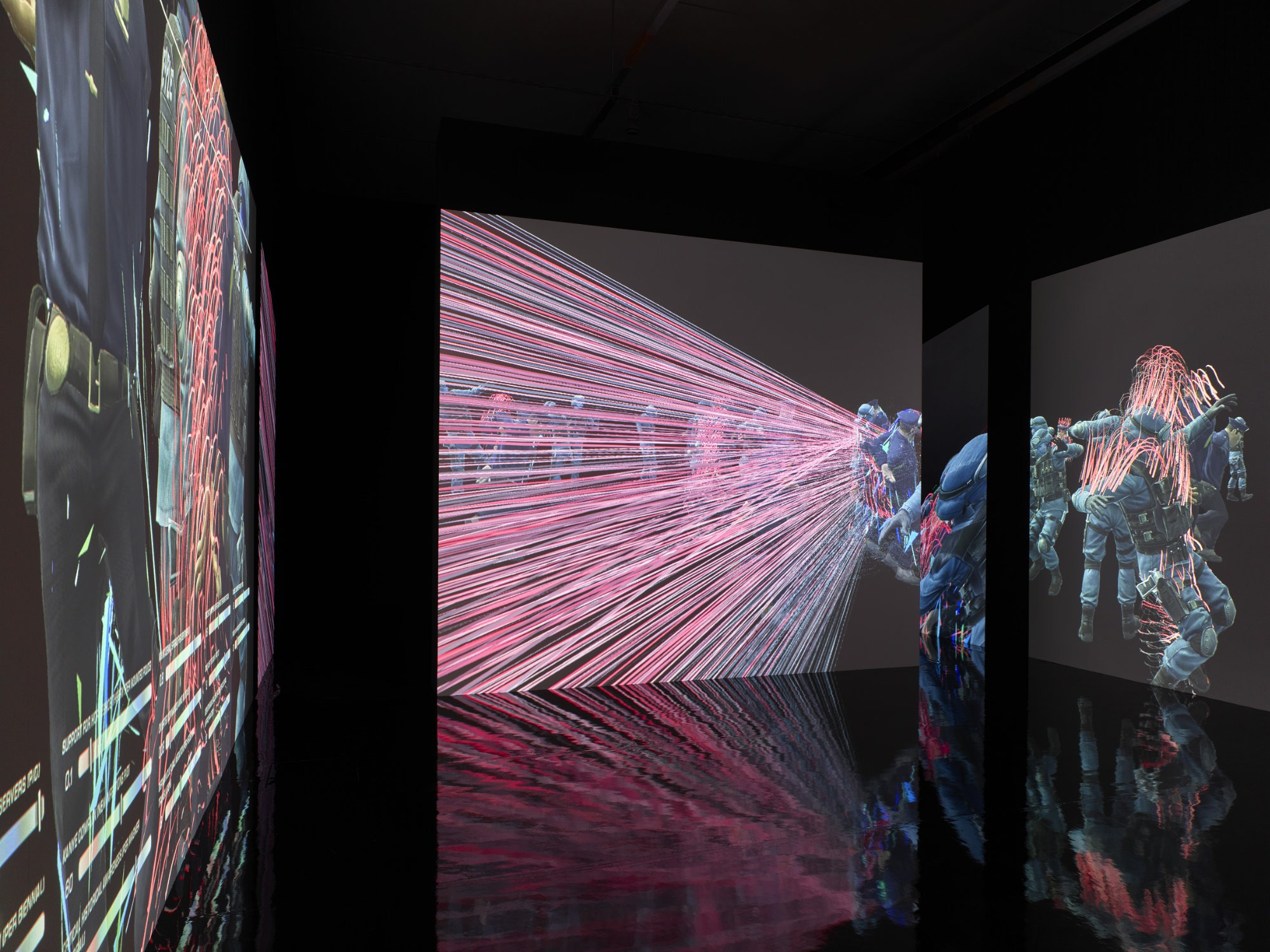 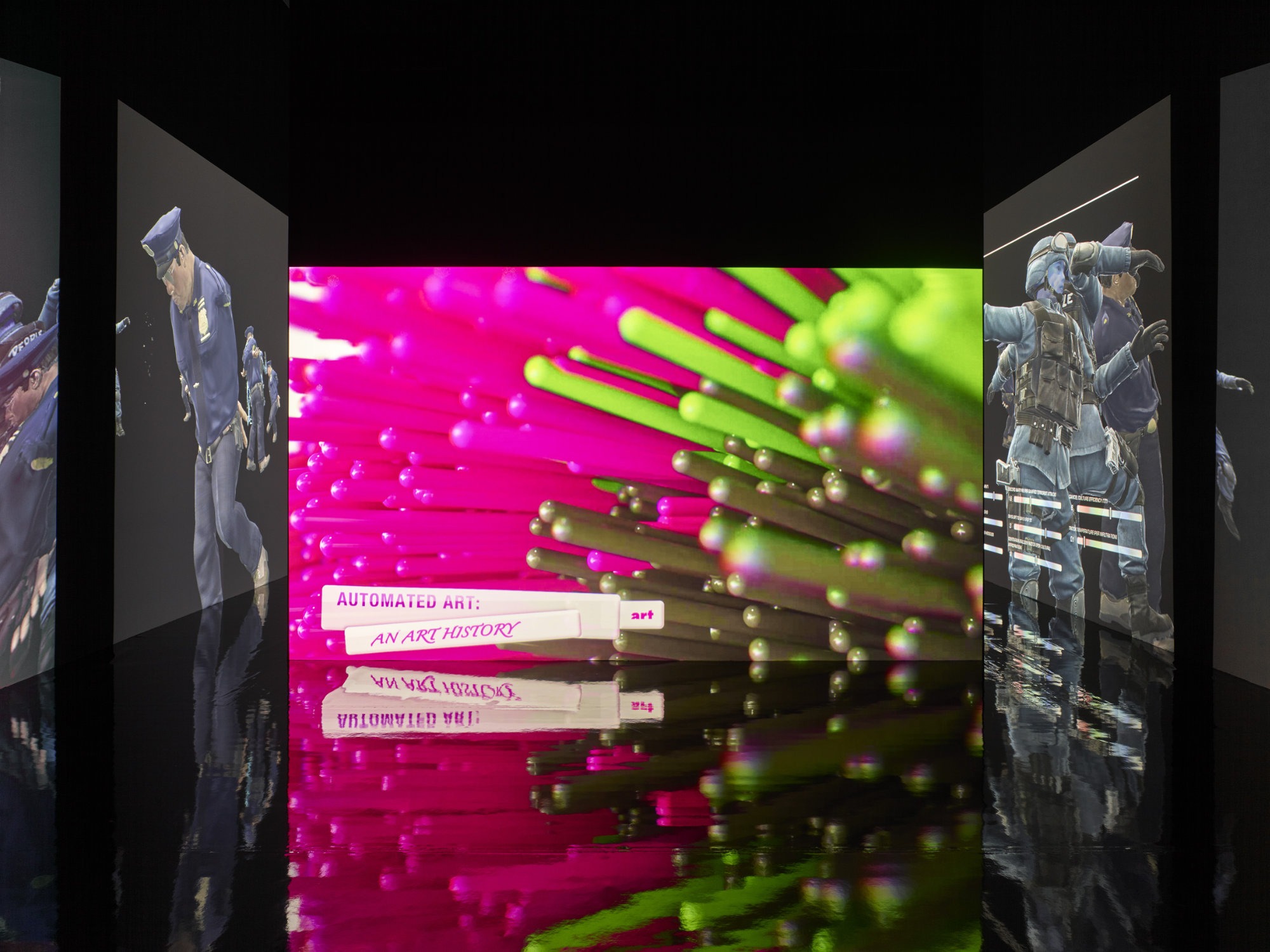 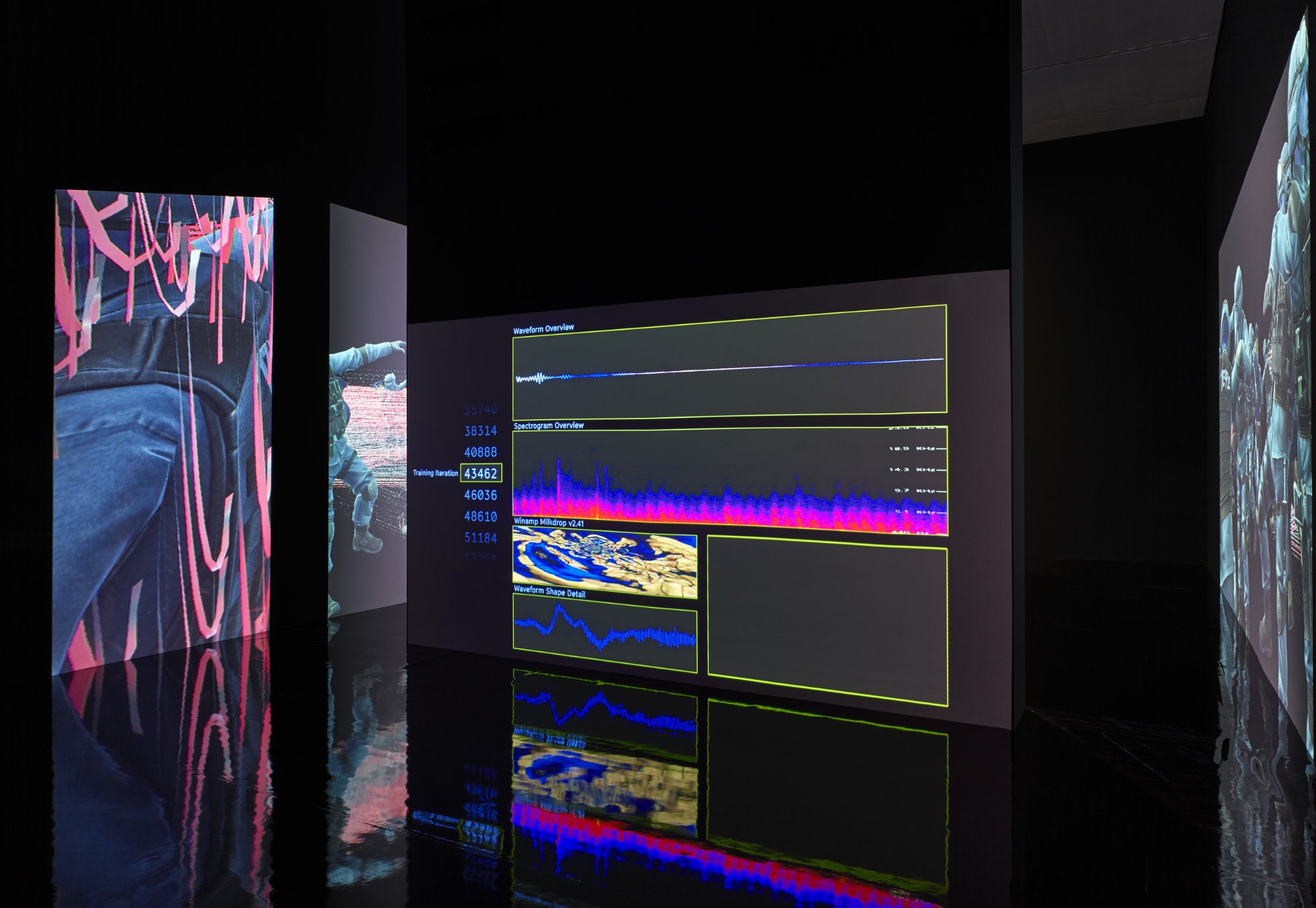 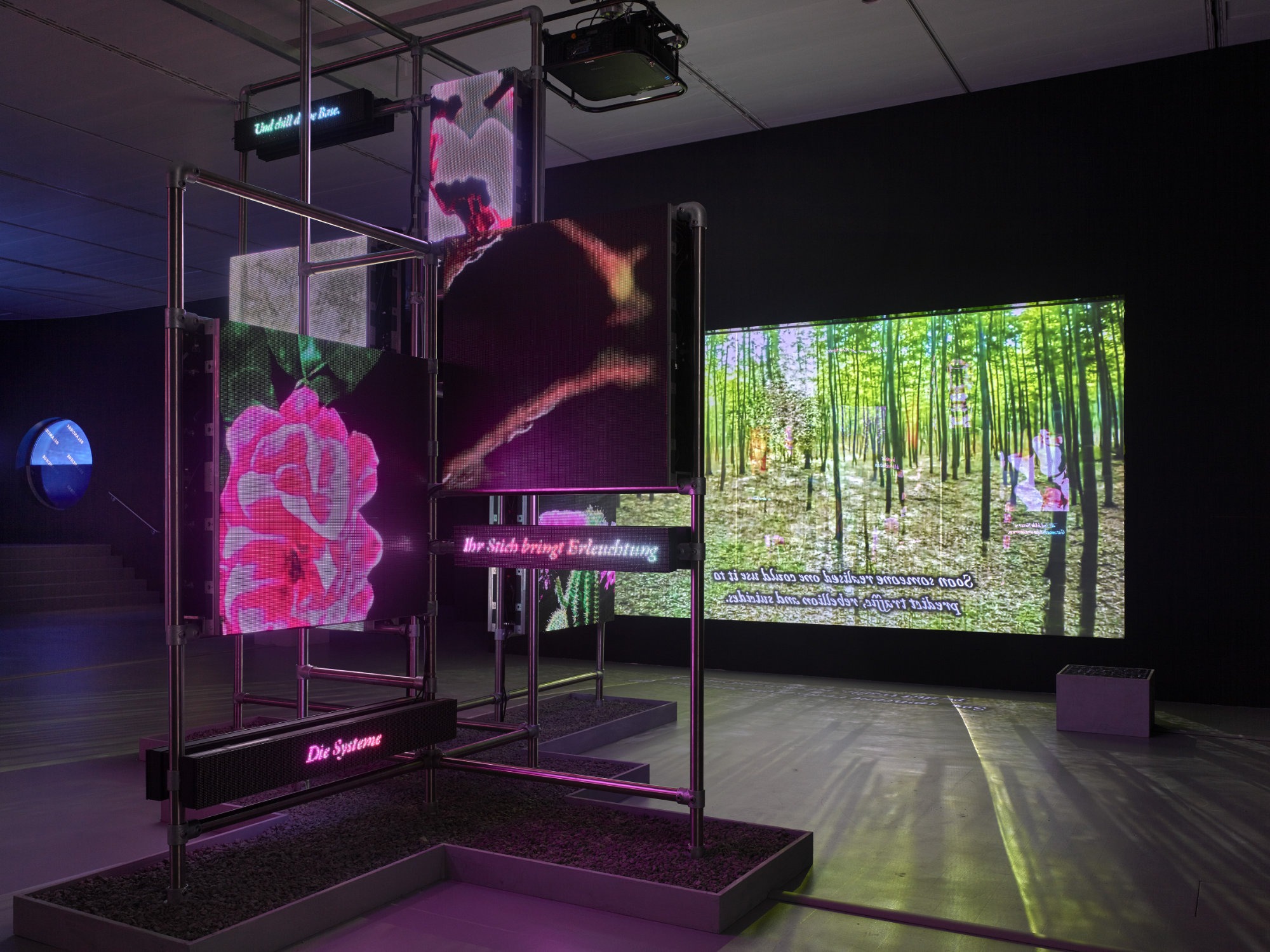 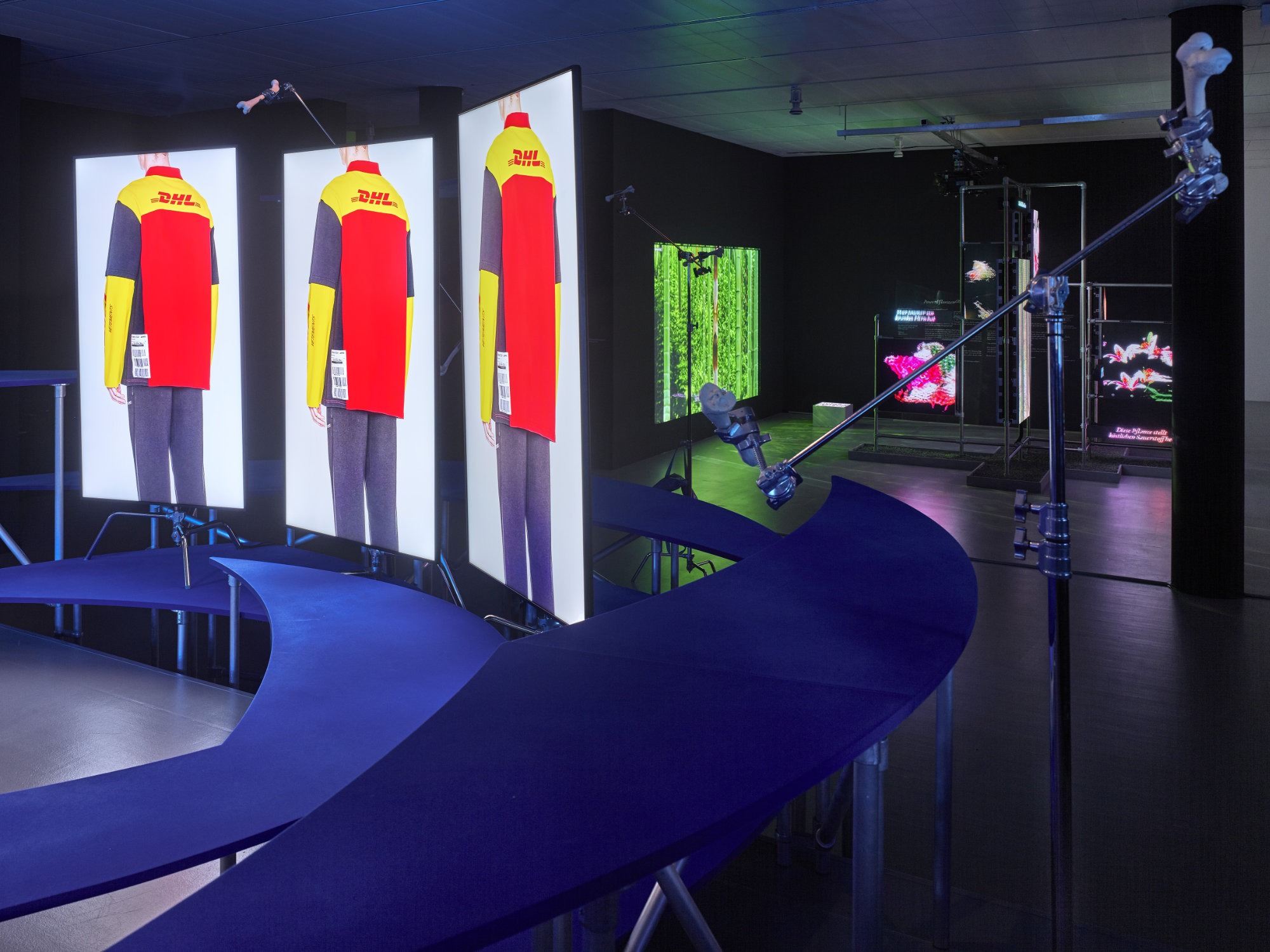 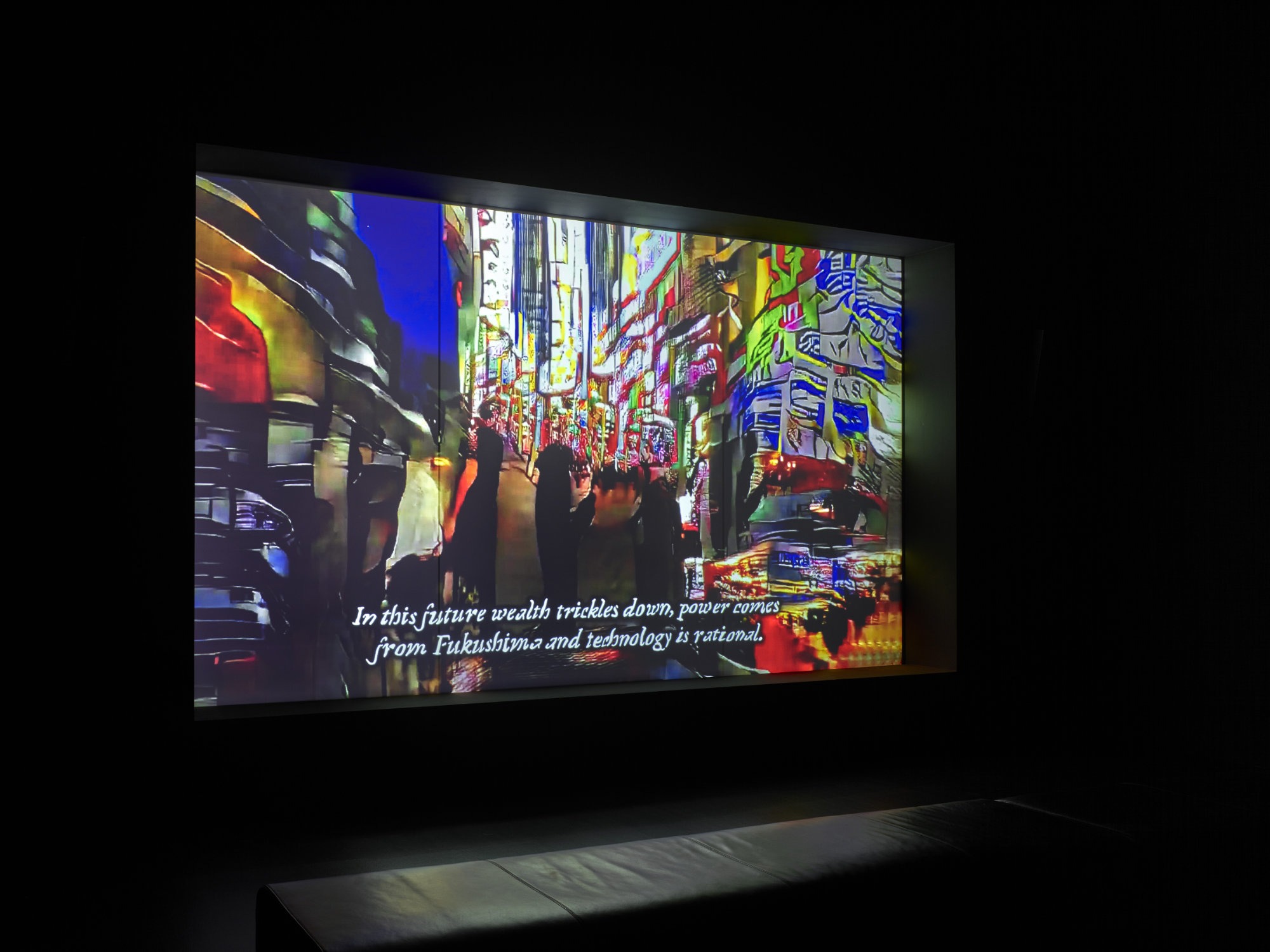 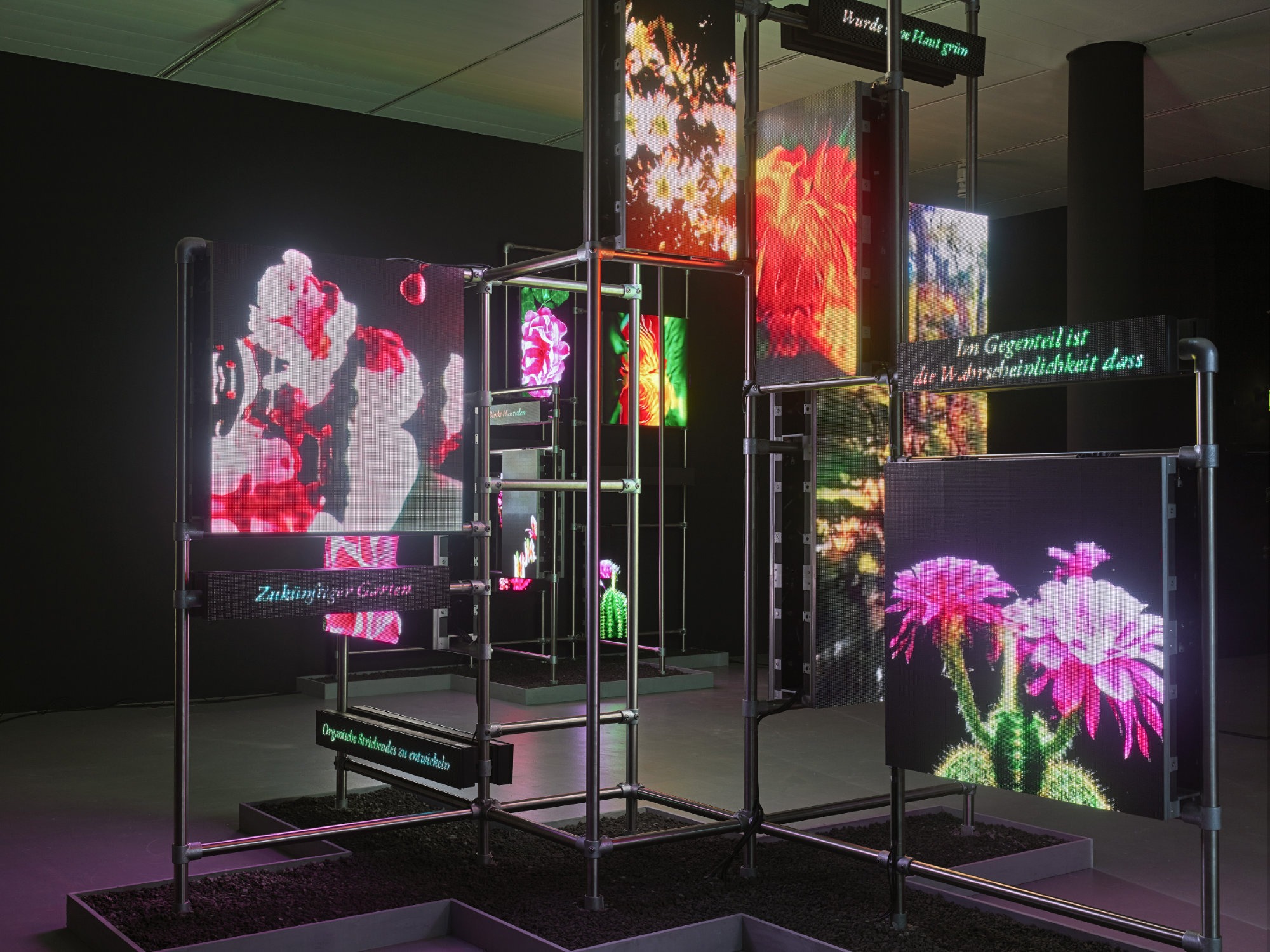 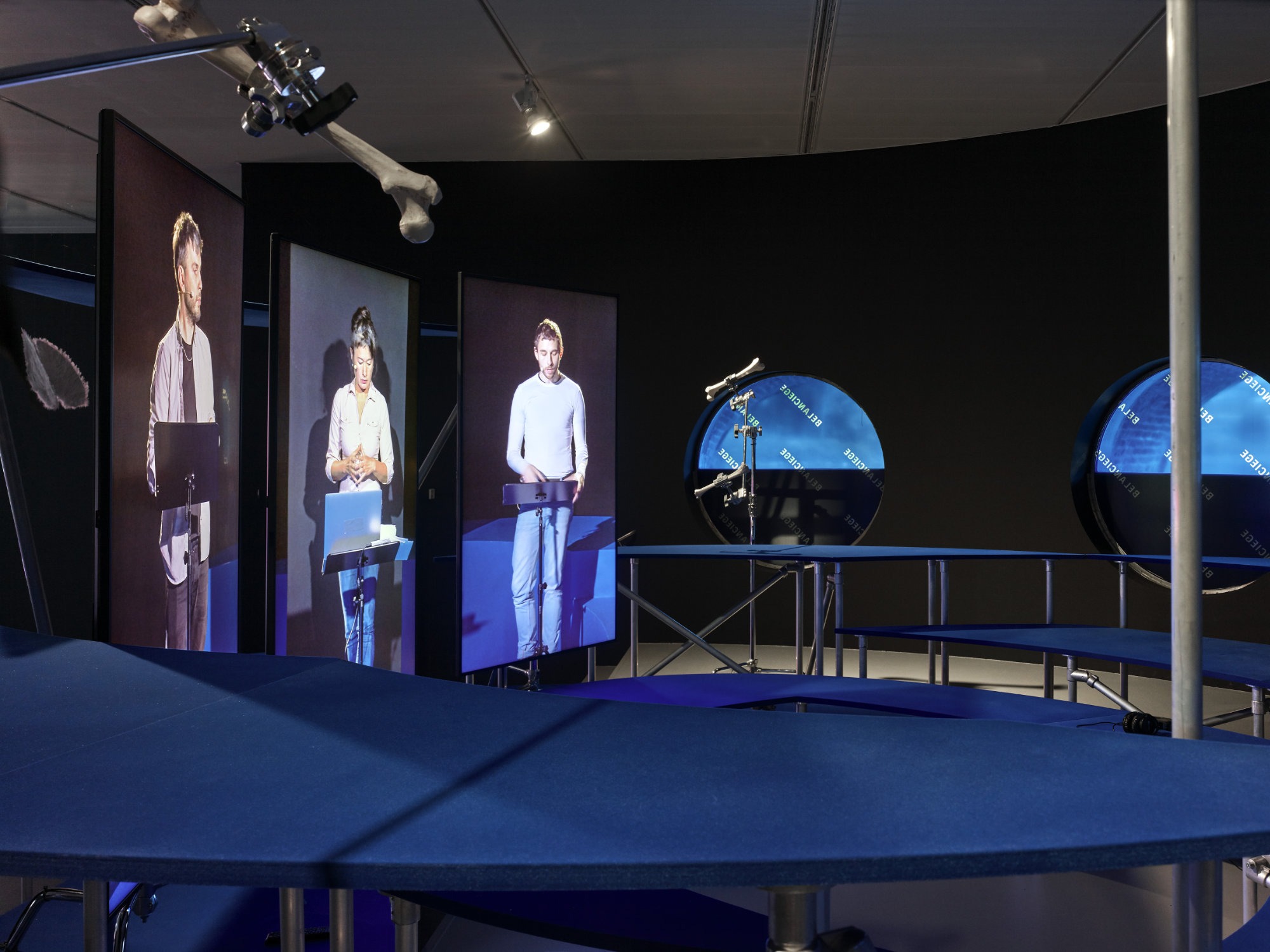 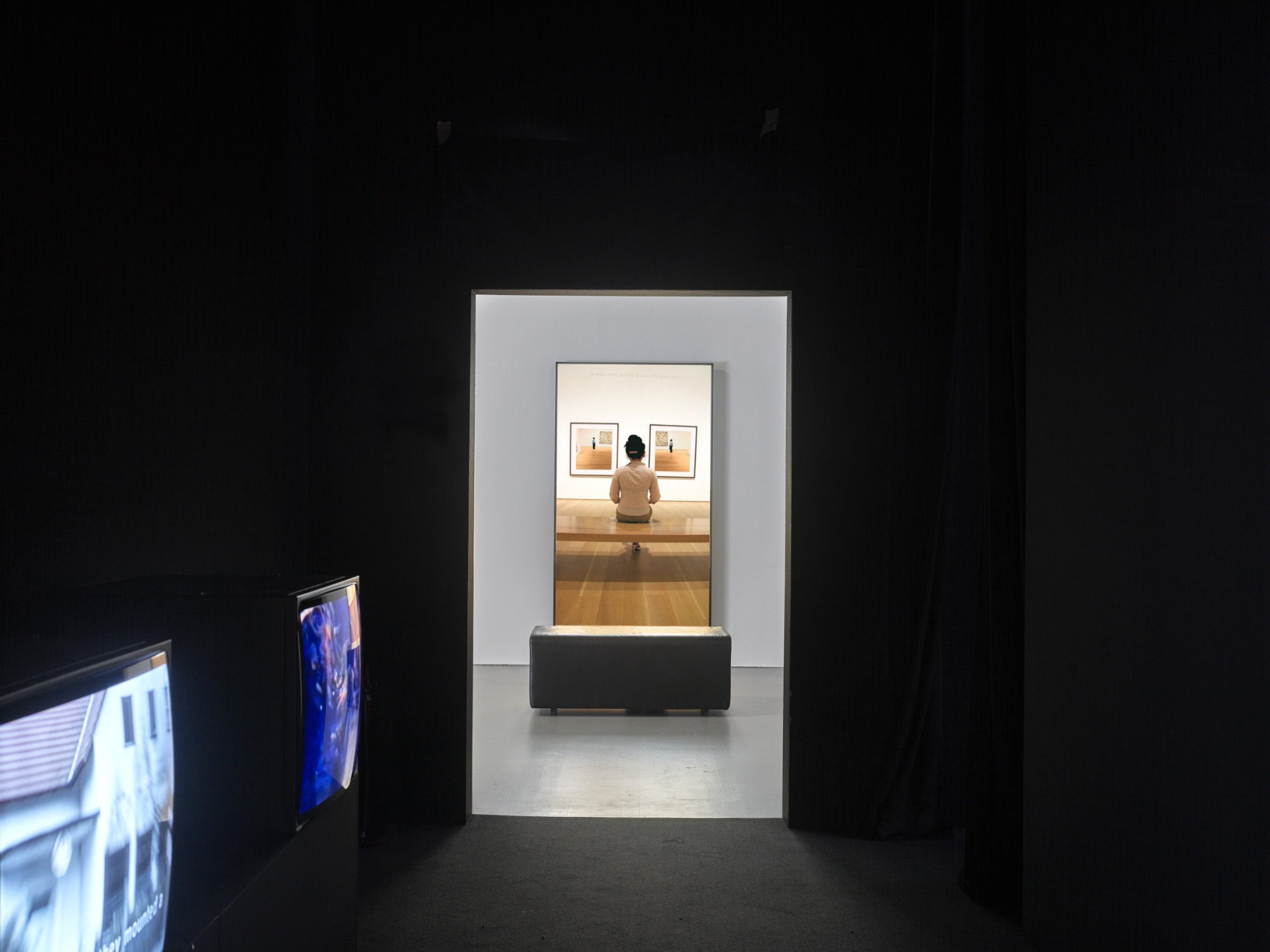 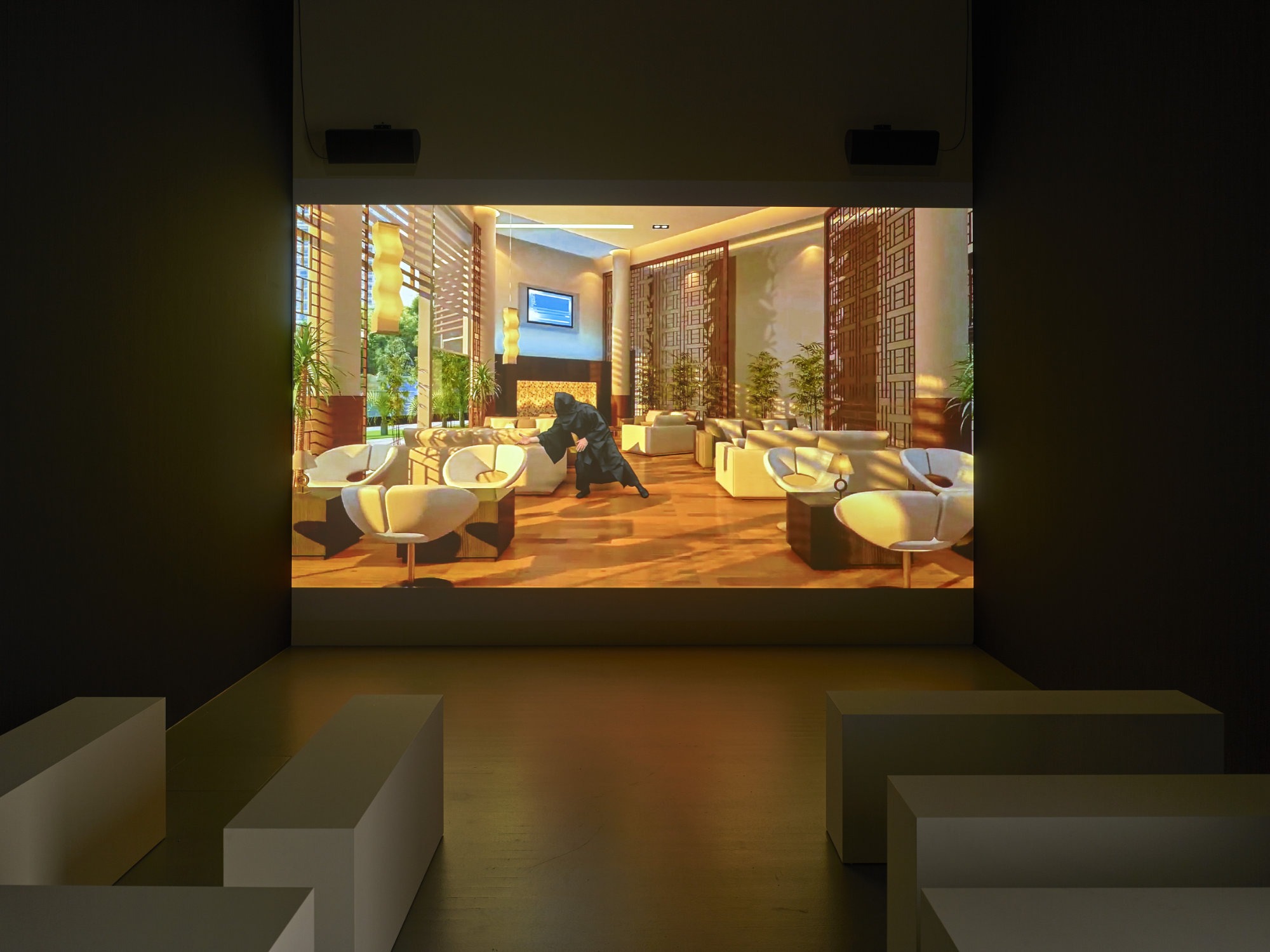 Hito Steyerl. I Will Survive, exhibition view at K21, Düsseldorf, 2020, photo: Achim Kukulies, Kunstsammlung Nordrhein-Westfalen, © VG Bild-Kuns, Bonn, 2020
The exhibition Hito Steyerl. I Will Survive at K21 is the first comprehensive overview of the work of the artist, filmmaker, and author to be presented in a German museum. The exhibition developed jointly by the Kunstsammlung Nordrhein-Westfalen and the Centre Pompidou will first be presented in Düsseldorf and will then travel to Paris, where it will be on view beginning in February 2021.

At the center of the presentation at K21 is the new multimedia installation “SocialSim” developed especially for the exhibition, with which Steyerl (b. 1966) critically explores the potentials of digitality, simulation, and artificial intelligence with regard to artistic creativity, modes of museum presentation, social upheavals, and pandemic conditions. This work explores the social fault lines and conditions of art production during the pandemic. It is also a reflection on collective hysteria and social networks. Steyerl turns a critical eye on the mass production of content, which is being increasingly taken over or manipulated by algorithms. “SocialSim” also looks back on other moments of mass hysteria in the past, like the dancing mania in the 14th and 16th centuries, which Steyerl translates into a social simulation called “Dancing Mania.” The work also features a TV police inspector on furlough because of the pandemic, and a task force looking for the lost painting “Salvator Mundi” by Leonardo da Vinci.

“SocialSim” is shown on the lower level of K21, together with a comprehensive selection of earlier works by Steyerl. In addition to large-scale installations from the past ten years (In Free Fall, 2010; Guards, 2012; How Not to Be Seen. A Fucking Didactic Educational .Mov File, 2013; Is the Museum a Battlefield?, 2013; Duty-Free Art, 2015; HellYeahWeFuckDie, 2016; The City of Broken Windows, 2018; This is the Future / Power Plants, 2019; and Mission Accomplished: Belanciege, 2019) the focus is on early films made shortly after Steyerl completed her studies in Documentary Film Direction. Deutschland und das Ich (Germany and the Ego, 1994), Babenhausen (1997), Die leere Mitte (The Empty Middle, 1998), and Normalität (Normality, 1999) are devoted to the resurgent racism and nationalism in post-reunification Germany. With November (2004) and Lovely Andrea (2007), two films central to Steyerl’s work will be shown, in which the circulation of images, the motif of death (of her friend Andrea Wolf), and the critical questioning of the sustainability of the documentary mode in film prove to be the core of Steyerl’s filmic-artistic approach. In theory and practice, Steyerl’s oeuvre represents a key contribution to the “documentary turn” in the visual arts around the year 2000. As a whole, the exhibition reveals how, over the past thirty years, Steyerl has followed the mutation of camera images from the analog image and its manifold montages to the split, fluid digital image and the resulting implications for the representation of wars, climate change, and capital flows.

Hito Steyerl as an Artist, Filmmaker, and Author Steyerl’s films are often impregnated by the visual nervousness of the Internet. The images, which are massively distributed, shared, manipulated, and commented on the World Wide Web, constitute a rich pool for her associative film collages, in which various image processing techniques, including the extensive use of 3D animation, are employed. This reveals a distance to the language of traditional documentary films, which Steyerl has defined under the term “documentary uncertainty” and described and analyzed in numerous essays and lectures. A graduate of the HFF – University of Television and Film in Munich, who later completed her doctorate in Philosophy and is now Professor for Experimental Film and Video at the UdK – University of the Arts in Berlin, Steyerl also draws on historical sources for her films and texts, incorporating Walter Benjamin’s philosophy of history and the “negative dialectic” of the Frankfurt School as a supporting foundation in the video essay format she helped to develop. Among the numerous sources used productively are, to name perhaps the most important, Theodor W. Adorno’s comments on the essay as a sketchy, subjective form of argumentation, Harun Farocki’s essay film, and finally Jean-Luc Godard’s revolutionary cinematic language. These are complemented by quotations from pop culture from disco hits to Monthy Python’s Flying Circus and game design. Yet despite her wit and penchant for paradox, behind Steyerl’s trenchant and—with a maximum length of thirty minutes—rather short films, there is a coherent interest in post-colonial criticism, ecological theory, feminist approaches, the criticism of Big Data and the surveillance industry, with which Steyerl herself now exerts a great influence on the artistic theory and practice of a younger generation.

A further critical questioning of her own authorship becomes apparent in November (2004), for example, when a voiceover (Steyerl) states: “It is not I who tell the story, but rather the story that tells me.” Here, it becomes clear that Steyerl is concerned with a history of resistance that is not only her own, but that of an entire generation, as Florian Ebner pointed out in the laudation for the artist on the occasion of the awarding of the Käthe Kollwitz Prize at the Academy of the Arts in Berlin in February 2019.

The presentation is not only Steyerl’s first comprehensive survey exhibition in Germany and her first major exhibition in France, it also combines a German-French perspective on the work. At a time when art is increasingly becoming the object of investment and speculation, determined and driven by the private commercial interests of large galleries and powerful oligarchs, the concept of public art is taking on a new relevance. Here, the artist’s approach meets the heightened awareness of the cohesion of the public sphere and art, as genuinely represented by the two state museums, the Kunstsammlung Nordrhein Westfalen and the Centre Pompidou. Last but not least, the antagonism between the private and the public spheres is the subject of Steyerl’s new work, and against this background, the collaboration between the two museums can be interpreted as a statement in favor of art within the framework of a socially responsible cultural policy.

On the occasion of the exhibition Hito Steyerl. I Will Survive, the second season of the K2021 podcast of the Kunstsammlung Nordrhein-Westfalen will be launched. Altogether four episodes are dedicated to the exhibition, in which experts and the artist herself are given the opportunity to speak for themselves. The first episode will be published with the start of the exhibition: Available free of charge for download wherever podcasts are available and at www.kunstsammlung.de.

Hito Steyerl was born in Munich in 1966. She studied Documentary Film Directing at the Japan Institute of the Moving Image (formerly Yokohama Broadcasting Technological School, founded by Sohei Imamura in 1975) and later at the HFF – University of Television and Film in Munich. She subsequently studied Philosophy at the Academy of the Arts in Vienna, where she received her doctorate. She is Professor for Experimental Film and Video at the UdK – University of the Arts, Berlin, where she founded the Research Center for Proxy Politics together with Vera Tollmann and Boaz Levin. Steyerl’s works have been exhibited in the context of the visual arts for twenty years and have been well received internationally. In 2004, November was shown at Manifesta 5 in San Sebastian. With Lovely Andrea and Red Alert, she became known among a wider audience at Documenta 12 (2007) in Kassel. With Factory of the Sun, she was represented in the German pavilion at the Venice Biennale in 2015. She participated in the 2016 Bienal de São Paulo with HellYeahWeFuckDie. The most recent of her numerous solo exhibitions in museums and art institutions worldwide include presentations at the Museo Nacional Centro de Arte Reina Sofia, Madrid (Duty-Free Art, 2016), the Museum für Gegenwartskunst, Basel (War Games, 2018; together with Martha Rosler), the Castello di Rivoli, Turin (The City of Broken Windows, 2018), the Serpentine Gallery, London (Power Plants, 2019), the Park Avenue Armory, New York City (Drill, 2019), and the Art Gallery of Ontario, Toronto (This is the Future, 2019). At the 2019 Venice Biennale, she was represented in the main exhibition May You Life in Interesting Times in the Arsenale and the Giardini with several works, including This is the Future / Power Plants. In addition to her filmic artistic work, Steyerl is also active as an author, conducts interviews, and gives lectures. A selection of her essays, published in various places, are summarized in four books: Die Farbe der Wahrheit (The Color of Truth; Vienna: Turia Kant, 2008), The Wretched of the Screen (Berlin: Sternberg Press, 2012), Beyond Representation (Berlin 2016), and Duty Free Art – Art in the Age of Planetary Civil Wars (London: Verso, 2017 / Zurich: Diaphanes, 2018). Steyerl lives and works in Berlin.