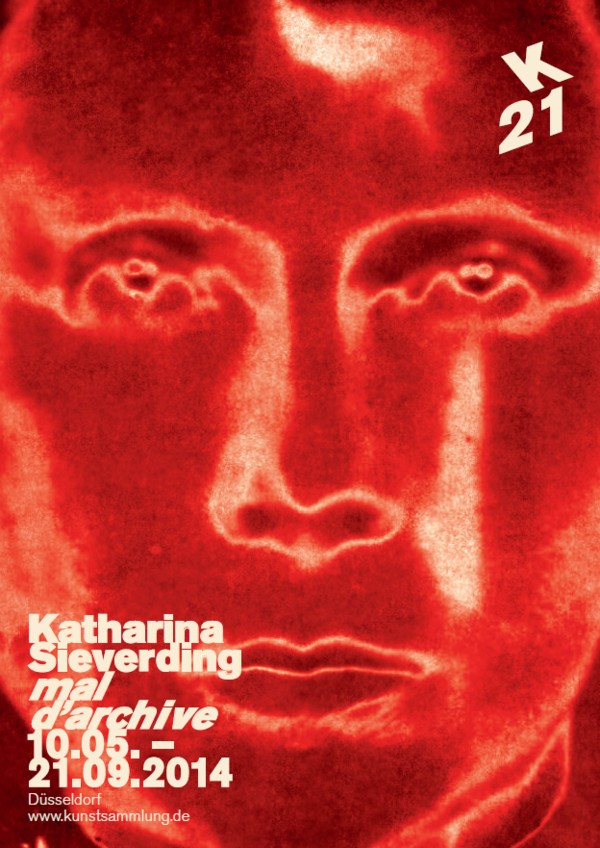 Katharina Sieverding, mal d’archive, K21 exhibition poster
Katharina Sieverding’s Stauffenberg-Block (I–XVI /1969), from the permanent collection of the Kunstsammlung, forms the center of this exhibition in the Bel Etage of the K21. Due to its enormous dimensions, this ensemble – consisting of 16 large-format color photographs of the artist – can be shown only infrequently.

The title refers to Claus von Stauffenberg, the resistance fighter who was executed in 1944 after a failed assassination attempt against Hitler. This early work is combined with two additional series (Maton Solarisation 1969 and Transformer Cyan Solarisation 1973/74). All three ensembles involve the continuous transformation of self-portraits of the artist, which are interpreted conceptually. Their serial repetition calls into question the capacity of the single portrait to capture the individual‘s identity.

These three work groups are juxtaposed with two photographic works from the series Visual Studies 2002, as well as an archival storage unit (ORWO 2014), which is presented as a spatial object. These works allude to the polymorphous pictorial archive upon which Katharina Sieverding bases her work, one whose thematic and visual implications she continually reconstitutes.

Sieverding’s oeuvre has evolved over a period of four decades into a wealth of statements that are situated between polarities such as individual and society, sensibility and critique, presence and withdrawal.