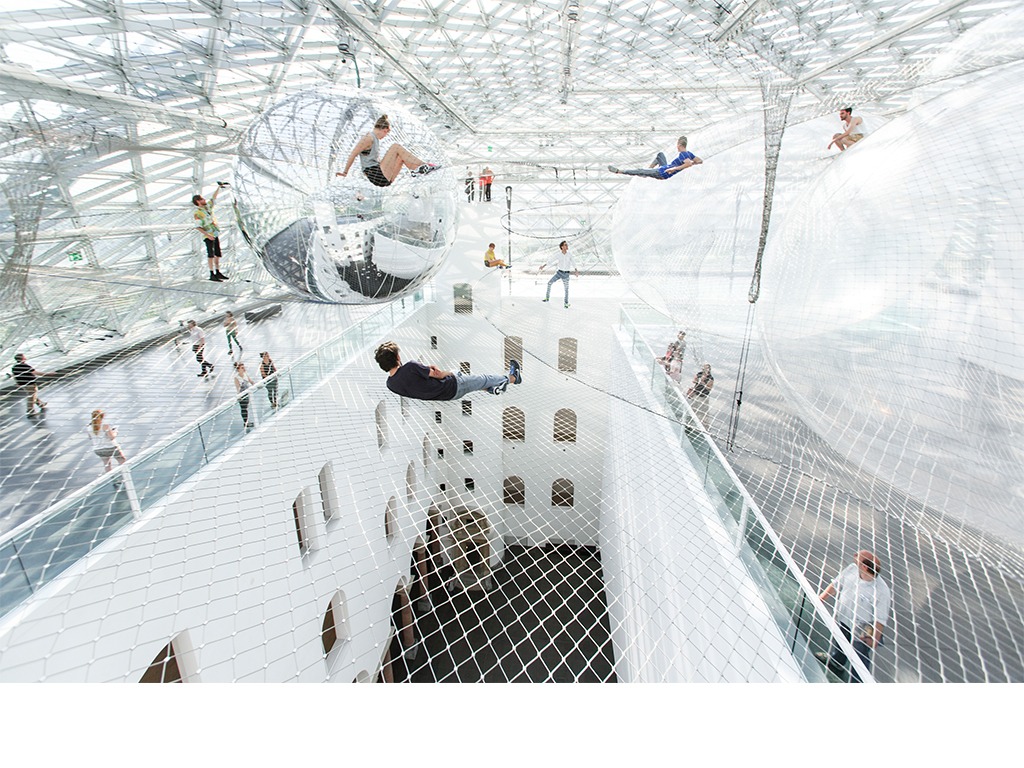 Suspended more than 25 meters above the piazza of the K21 is Tomás Saraceno‘s gigantic installation in orbit. This steel wire construction spans the museum‘s vast glass cupola on three different levels. Positioned within this net structure, which encompasses altogether 2500 m2, are half a dozen „spheres“ – inflated spheres having diameters up to 8.5 meters. Visitors have access to this transparent installation, and can move freely between the spheres on all three levels.

in orbit resembles a surreal landscape, is reminiscent of a sea of clouds. Those bold enough to clamber high into the work set beneath the glass cupola perceive the museum visitors far below them from the lofty heights as tiny figures in a model world. Viewed from below or from intermediate levels of the Ständehaus, conversely, the people enmeshed in this net seem to be swimming in the sky.

This floating spatial configuration becomes an oscillating network of relationships, resonances, and synchronous communication. When several people enter the audacious construction simultaneously, their presence sets it into motion, altering the tension of the steel wires and the intervals between the three meshwork levels. Visitors can coordinate their activities within the space, and are able – not unlike spiders in a web – to perceive space through the medium of vibration. Saraceno himself speaks of a new hybrid form of communication.

By virtue of its magnitude and radicality, in orbit has no precedent in Saraceno‘s oeuvre to date. Even visitors who do not wish to climb the net or hang suspended above the abyss, but who choose instead to explore the installation in exclusively visual terms are confronted with themes of flight, falling, and floating, are inevitably gripped by the archetypal emotions associated with these states. „To describe the work means to describe the people who use it – and their emotions,“ explains Saraceno. Rarely his any work of art zeroed in so directly on the emotional lives – the fears and desires – of beholders or intervened with such immediacy into the experiences of those who expose themselves to adventure.

in orbit was planned by Saraceno over a period of three years in collaboration with engineers, architects, and biologists, and is his most elaborate installation to date. And although the mesh construction alone weighs 3 tons, and the largest of the „spheres“ 300 kilos, this work – which was adapted with precision to the unique setting of the Ständehaus – seems decidedly lightweight, its fineness and stability calling to mind the structure of a spider‘s web. For many years, the artist has studied the methods by which various species of spider construct their webs, and he incorporates insights into their functionality, beauty, and strength into his own artistic praxis.

While the precise observation of nature and the conceptual development of its phenomena form the bases of Saraceno‘s work, art-historical references ranging from Jules Verne to the American architecture and visionary Richard Buckminster Fuller are noticeable as well. The worldwide realization of utopian architecture has been Saraceno‘s guiding theme in recent years. Each of his projects – including „in orbit“ – is an element of the utopian large-scale project Air-Port-City, a floating city of the future. Saraceno regards the cloud city as a socialist and utopian dream, and as a response to the growing uninhabitability of the earth, to worldwide population growth, and to dramatic ecological crises.
www.kunstsammlung.de