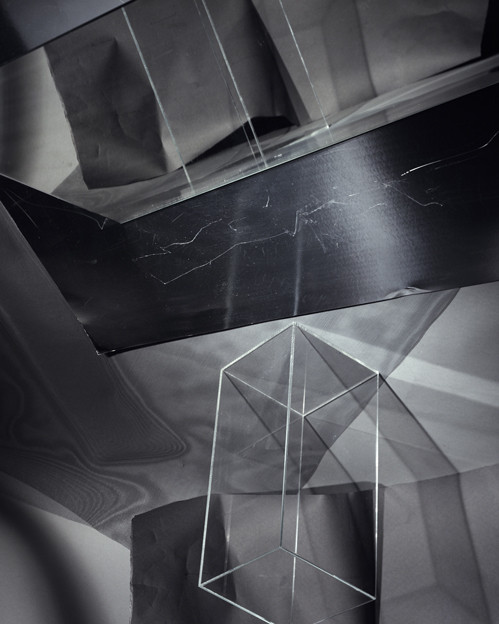 BARBARA KASTEN ́s (US 1936) photographs do not narrate and document stories, instead, they are a “print” of the abstract features of light and shadow.

What makes Barbara Kasten’s position so exceptionally relevant is that her abstract pictures are based on the real construction of expansive installations in front of the camera. Thus, in the early 1970s, she already crossed genre-specific borders between sculpture, painting and installation, something which strongly connects her work with the approach of he young generation of artists.

In the early 1970s, Barbara Kasten began experimenting with photochemical reactions and photograms, on which she painted with chemical colours from cyanotype. The photogram series “Amalgams” (1978-79) was produced by exposing architectural models made of glass and metal elements that were directly positioned as “sculptural negatives” on the light-sensitive photo paper. In the late 1970 ́s and 1980 ́s Barbara Kasten began to build space-filling, abstract installations in her studio made of colored light as well as reflecting mirrors and metal elements, which she then photographed with 8 x 10 inch and 20 x 24 inch format Polaroids, called “CONSTRUCTS” (1979-1984). Her cibachrome-Series “Architectural Sites” (1984-1989), each 60 x 50 inch, has expanded this working practice into the public environment. Existing architectures such as the Whitney Museum of American Art or the Museum of Contemporary Art in L.A. were detached from their original context by means of elaborate “stage sets” in front of and behind the large-format camera. Geometrical mirrors and coloured light sources were positioned according to the artist’s instruction by a team of fifteen persons during the shootings. The mirrors integrate the background of the photographic eye, fragments of space are actually “inserted into” the picture, while at the same time the construction of the photo agitates a logical attribution of the image information.

Barbara Kasten ́s second solo show at Galerie Kadel Willborn continues her interest in “space as stage”. The site-specific video installation SCENES deconstructs the current gallery space through the changing light and shadow play as an architectural stage set. Each photograph of the eponymous series, “Scenes”, could be regarded as the mise-en-scène of a single act, a frozen frame of the transient parameters of light and shadow.

B i o g r a f i c a l N o t I c e:
Barbara Kasten, born 1936 in the USA, lives and works in Chicago. In 2014 she will present her solo exhibition at Institute of Contemporary Art in Philadelphia, USA. Her works are part of international museum collections as Tate Modern London, UK, High Museum of Art Atlanta, Georgia, US, Amon Carter Museum, Forth Worth, Texas, US, J. Paul Getty Museum Los Angeles, US, Museum of Modern Art, Lodz, PL, Art Institute of Chicago, US or Museum of Fine Arts Houston, US
www.kadel-willborn.de