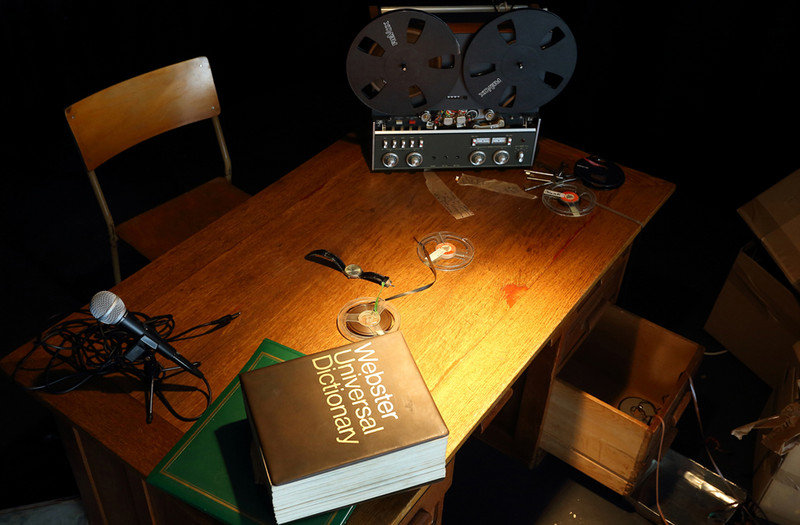 Dani Gal’s sound, film and slide installations manipulate the original narrative logic and address the difference between the truth of collective memory conveyed by media and subjective feelings. Many of Gal’s performances and elaborately produced films are based on the re-enactment of an historical event by professional actors, like the film Nacht und Nebel shown at the 54th Biennale in Venice. The film is based on an interview with the Holocaust survivor Michael Goldman. In 1962 he belonged to the group of Israeli policemen who, after the trial and death sentence against the Nazi war criminal Adolf Eichmann which was covered by the media, were to secretly disperse his ashes in the international waters of the Mediterranean. Dani Gal’s specific way of dealing with oral narration is also reflected in his collection of long-playing records with historical speeches of the most various politicians and radio broadcasts now comprising more than 300 records. Not seldom combined with the propaganda of dictatorial regimes, these kinds of records were a popular medium up until the 1980s for disseminating political and historical contents. Comparable to a DJ, Dani Gal, in the performance voiceoverhead with the artist Achim Lengerer, mixed his archive with a live sound performance at the Deutsche Guggenheim in Berlin and the Hessischer Rundfunk radio station.

The performance Krapp’s Last Tape is Dani Gal’s adaptation of the eponymous theatre play by Samuel Beckett from 1958 in collaboration with the British actor Steve Ellery. Krapp’s Last Tape is a one-person play. Steve Ellery plays Krapp, who on this day turns 69. Following his personal tradition on birthdays, he records a tape with his memories of the past twelve months, but first listens to the recordings of previous years, in this case a tape he recorded at the age of 39. The tape from the past becomes the dialogue partner of 69-year old Krapp. He hears the voice of 39-year-old Krapp, who in turn comments on previous recordings of an even younger Krapp. He drinks one whiskey after the other, and in the dialogue with the voice recordings of his past self, it becomes clear how little has remained for him. Krapp’s dialogues with himself reveal a subjective disorientation of time and space, for he has forgotten his memories. Beckett’s instructions say that Krapp’s memories on the tapes no longer belong to him, for his mind is not capable of retaining them. This subjective disorientation is transferred to the audience in Dani Gal’s adaptation. All props like Krapp’s desk, the chair, the stage, and the recording device are connected to contact microphones. Soft vibrations turn into sounds. During the performance, Dani Gal mixes them in real-time on a table in front of the stage to a new sound piece that together with the movements and the text spoken by Steve Ellery introduces an additional narrative level. Steve Ellery’s spoken text becomes sound, the props turn into instruments and the movements into an acoustic composition that, when returning to the stage as sound, is detached from Steve Ellery’s body. The audio feedback develops its own dynamism that factually lets the present and past collapse into each other. In the end, the viewer, who is confronted with these points of the present in the sense of Deleuze, must construct the missing connections.

The performance with Steve Ellery starts at 6:15 pm and lasts 52 minutes. Corresponding with the format of a theatre performance, the gallery may not be entered during the presentation. Afterwards, the indications of the performance will remain as an installation: the audience seats, the stage, the props, and the sound recording of the entire performance produced by Dani Gal, which becomes an audio piece. The visitors can and should then access the stage and the room behind it. The exhibition continues, as the nice phrase goes. The second room features the slide installation Failed to bind. The title playfully refers to Bruce Nauman’s work Bound To Fail from 1966–67/1970, an iconic document of the work processes of the 1960s. It depicts the back view of Bruce Nauman’s bound torso and reflects the attempt to grasp, formulate and perhaps let fail the artist’s self and his relevance and relation to his surroundings. Dani Gal’s work Failed to bind consists of two slide projections combining texts and images from historical sources. The photographs depict international political events of the day from the 1970s until the present, while the texts are statements by artists from the same period of time. The historical events inscribed in the collective memory encounter the essence of subjective opinions and self-localizations in regard to current events expressed in the selected artists’ statements. Their radicality enters into a disturbing liaison with the documented photographs. Faced with the unusual combination of text and image, the viewer must come to an interpretation between collective knowledge and subjective perception, and in doing he also risks failure. The concept of truth becomes retraceable as the construction of the relationship between different sources and their subjective interpretation.