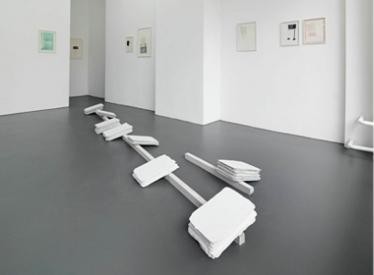 Hanna Heinzelmann deals with various materials in her works, including foam, concrete, polystyrene or linen, and with the way they undergo changes. Manual traces refer to the production process that benefits not least from an experimental approach to the qualities of the material. This intuitive working method is a productive component of the resulting artworks.

The artist’s sculptures and works on paper are created in relation to each other and consistently interact. Questions specifically related to the space are included in this interplay and are crucial for presenting the works The modular treatment of the sculpture plays a central role: The arrangement and expansion of the concrete slats and the plaster flakes stacked on them are variable and adapted to the gallery space.

Hanna Heinzelmann deliberately combines materials to create contrasts. The juxtaposition of plaster and concrete is highlighted through color and form. The slightly differentiated pigmentation and the thickness of the plaster flakes lead to fine breaks in the linear course of layering along the concrete slats.

Her works on paper take up the principle of layering and overlapping and are characterized by a swift, simple gesture. Watercolor, chalk, charcoal and different sorts of paper and cut-out surfaces capture momentary states that in turn reveal parallels to her sculptural work. The treatment of change and material surface is taken up and translated into the form of collage.

The individual works continuously correlate without forfeiting their autonomy.

Biographical note:
Hanna Heinzelmann (*1988) lives and works in Karlsruhe. From 2009 to 2014, she studied sculpture under Prof. John Bock, and has been studying painting and graphic under Prof. Silvia Bächli since 2014. Last year her works were on view in the frame of the group show “Besuch an der See” at Werkstatt 212 in Bremerhaven.
www.kadel-willborn.de