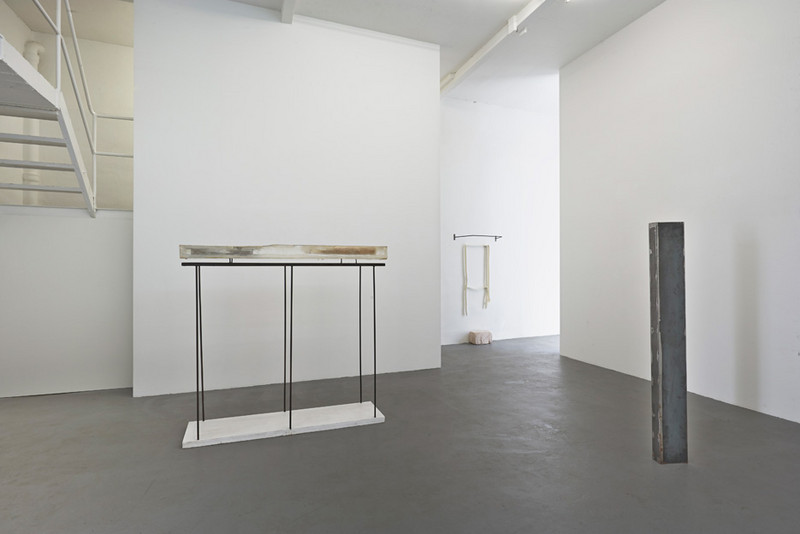 We are delighted to open the exhibition with Aleana Egan, Francesco Arena and Rudolf Polanszky. The group show presents three different sculptural positions which we juxtapose in our gallery spaces in Karlsruhe.

Aleana Egan’s (*1979, IRL) installations consist of the assemblage of ordinary materials that can be read as citations of windows, doors and other common objects. She uses typical industrial materials such as steel, concrete, rubber bands and ropes, placing them in the context of less resistant materials like fabric and paper. Egan highlights the physical aspect of the modified objects and above all refers to their new, concrete state: How are the individual elements supported? How do they hang and in which way are they bent? In this context the artist stresses the relationship between mass, lightness, pressure and load.
The titles of her pieces are often drawn from literary texts of Irish origin, by James Joyce, Samuel Beckett or Iris Murdoch, for example. The work on display is titled “Imposing building, Finchley Road” and seems to refer the viewer to a concrete place. However, through her new composition of forms Aleana Egan eludes a restrictive interpretation of her works, instead offering complex variants of approaching the content.

Real occurrences are the starting point in Francesco Arena’s (*1978, IT) working method. He makes use of political, social and mythological events and links their historical dimension to personal components. Arena is particularly interested in controversial events in which the protagonists at a certain point in time cease being individuals and are elevated to symbols. Actual dimensions, weight specifications, volumes or distances taken from important historical moments or from his personal surroundings determine the form of Arena’s objects.
The work “Around Celine” shows a metal housing built around the books of the trilogy “North” by the French writer Louis-Ferdinand Céline. In the autobiographical novella, set during the time of the Second World War, the narrator Ferdinand flees from Paris to Baden-Baden. The total weight of the sculpture corresponds with the actual weight of the artist Francesco Arena. In the same manner, the height and width of the object are also the same as the artist’s body dimensions.

With Rudolf Polanszky (*1951, AT), we present an artist of the generation of the 1960s and a proponent of Viennese Actionism. Polanszky uses different forms of artistic expression such as painting, photography, video, collage and objects. He develops his own terminology by methodically treating of his subject matter. The central aspect of his work is that art is to be seen as a necessary part of the evolution. Among his early conceptual works are the “Schweinsfettzeichnungen”, “Tierstempelbilder”, hand-painted super 8 films and the “Sprungfederbilder”. At the end of the 1990s, he began with the series of “Reconstructions” and started working with materials such as acrylic glass and plastic.
The installation object on view in the show is a logical continuation of his early pieces and is described by Polanszky as a “hypertransform sculpture”. What he means by this is a sculptural implementation of his epistemological approaches. At the fore is the construct meant to indicate its internal structures and the attendant instability. Along with the “hyperbolic spaces”, the sculptures are currently the main focal points of Polanszky’s work.