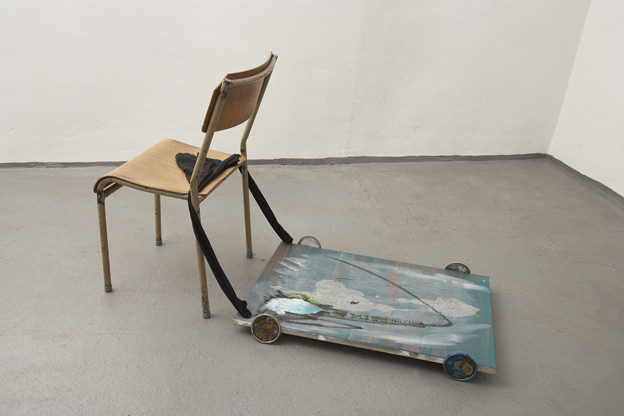 It suggests itself to describe Molly Zuckerman-Hartung’s works as abstract paintings, yet this doesn’t quite hit the nail on the head. One can obviously relate her pieces to the formal variants of American abstraction as represented by Mary Heilmann, Helen Frankenthaler, Agnes Martin, or also Jackson Pollock. Her material assemblages composed of oil, acrylic and spray paint, canvas, cut-up canvas, pasted shreds of canvas, and found objects or prints, are structurally akin to the New Realism of a Robert Rauschenberg, the poetic recycling of reality, but they also critically question reality. This is accompanied by a reflection on social understandings of value, the combination of high and low culture in art. As with a perpetual motion machine, opposites such as beautiful/ugly, feminine/masculine, analytical/emotional, concentrated/proliferating, and sculpture/painting in Molly Zuckerman-Hartung’s works trigger the reflection on the theoretical subtext of painting. The viewer fragmentarily “reads” “texts” about punk, sex, critical and political theory, and, of course, autobiographical subjectivity in her works. Dealing with theoretical, philosophical and gender-specific views of social and artistic forms is the subtext of the artist, who in the process of production also questions her own role. Hidden behind the individual letters of the alphabet on her website, one finds her own essays, statements or quotes in dialogue with theorists such as Chantal Mouffe, Susan Sonntag or Claude Levi-Strauss, song lyrics, poems, links to befriended artists, or a list of “Painters we should know”. This infinite process of a conceptual analysis of the question of context and its hegemonic power to define a painting is in line with Zuckerman-Hartung’s work process. The production of a painting can take several years, its completion remains an “endeavour” that from the artist’s perspective is a hazardous one, as is the case with her new pieces, “Monster Energy” or “Prairie Winds” (both 2010-2012). The works are doubtless abstract, the canvases are cut up, joined together, nailed, paint was applied in numerous layers, removed again, and found objects were attached. In this manner, Molly Zuckerman-Hartung’s works of art construct a critical narrative field on the status of painting and simultaneously depict the perception of reality in our society, in the here and now.

Molly Zuckerman-Hartung is a painter living in Chicago. She has shown extensively in Chicago and New York City, including a solo show The Museum of Contemporary Art (Chicago). Recently, she was in a two person show with David Keating, called Hysterical Sublime, at Spazio Cabinet (Milan) and has presented her solo exhibition at the gallery Corbett Vs Dempsey in Chicago. She has taught introductory and advanced painting at SAIC and Northwestern University, as well as a graduate seminar at SAIC with Dana DeGiulio, is one director of five at Julius Caesar (Chicago project space, 50 shows and running) with Dana DeGiulio, Chris Naka, Min Song, and Sean Ward, and she has writing in Possible Projects. She spoke on a panel at CAA organized by Michelle Grabner on Painting Positions in 2010, and has been a visiting artist at UIC, Washington University in St Louis, and Harold Washington College.
www.kadel-willborn.de