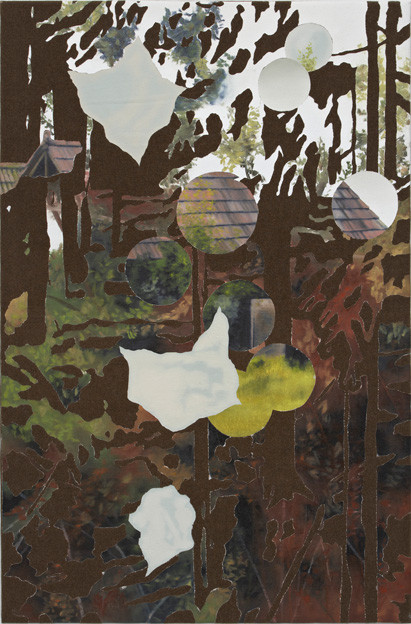 With photography as her chosen medium, Natalie Czech examines the complex interplay between image and text and infers new levels of meaning in search of the hidden poetic potential within them. The artist draws inspiration for her photographs in material found in magazines and illustrated books, seeking out the poetry disguised within them, and in the imagery of visual and concrete poetry.

In the "Hidden Poems" series, for example, a work in progress which she began in 2012, Czech works with illustrated pages from magazines and books; she marks out individual letters or words within the passages of text underlining or highlighting them in bright colors, and in so doing reveals a poem which had been concealed all along. Through specific selection and minimal intervention, Czech discloses an autonomous , second text within the original and indeed still legible text; examples include poems by lyricists such as Robert Creeley, Rolf Dieter Brinkmann or Robert Lax. The process of seeking out and revealing these texts give an impressive indication of Czech’s fine feel for those sensational elements that remain latent in everyday life, and of the poetic potential that lies dormant within the caracter set of texts that are pronounced in the mass media. When looking at the photographs, reading their content and mentally reassembling the fragments of text, which are at times separated by quite a few lines, Czech’s markings emerge as lyrical interventions, which, like a thought flashing through one’s mind, are formed and indeed exist in relation to the fabric of text and image at hand. Embedded in a foreign context, the poems interact with the existing text and shed new light on it; for example, in a text accompanying a photograph filled with the image of a sunset, Czech scents out a short poem by E. E. Cumming "In sunlight over and overing, A once upon a time newspaper"; the original piece explains that a nuclear test was the cause for the image’s supernatural coloring. Marks on book pages on Appropriation Art, dealing with questions of authorship and authenticity equally relevant in Czech’s work, also take up and comment on the contents of the cropped illustrations. In other groups of works, Czech reverses the subjective process of reading and finding and instead concentrates on the scope of possibility offered by the medium of writing. Her point of departure and source of inspiration is the imagery inherent in visual and concrete poetry, whose optical formations highlight the phonetic and semantic dimension of the language, an example being Guillaume Apollinaire’s famous calligram "Il pleut". For these works, Czech commissioned several authors to compose a written piece, in which the calligram consisting of an arrangement of individual letters was embedded. These literary re-writings in a variety of languages provide their own interpretation of Apollinaire’s poem and expand upon it, as it disappears into the linear flow of text.
By photographing and blowing up the passages, they are transformed into an image that functions as both documentation and fabrication at the same time. The illustrative markings, which are then applied to the photographs, present Apollinaire’s poem in an entirely new light and transform this photographic reconstruction into an original. Comparable with one key characteristic of the calligram, which is both image and text, Czech’s photographs can never be perceived as an image and received as a text simultaneously, but encompass the interactive process of appearance and disapperance, a theme that is addressed rather explicitly in the "Il pleut" series. Natalie Czech sounds out the realm beyond unambiguity and linearity, and by bringing different authors into the equation reveals a pulsating nexus of poetic connections and references. (Ute Stuffer)

Natalie Czech’s (*1976 GER) works are currently on view at the Sprengel Museum Hannover in the show "Made in Germany" and at Ludlow 38 in New York. She has already presented solo shows at the Nassauische Kunstverein Wiesbaden, the Kunstverein der Rheinlande und Westfalen Düsseldorf and the Bonner Kunstverein. Her works have also been on view in international group exhibitions including "Differenza e repetizione", Galleria Lia Rumma in Naples, "Anfang gut. Alles gut" at Kunsthaus Bregenz and "Milk Drop Coronet", Kunsthaus Graz / Camera in Graz.
www.kadel-willborn.de