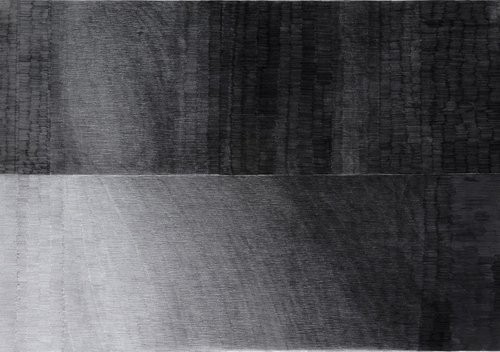 We are pleased to announce the opening of the exhibitions of Patricia Dauder and Dani Gal. Both artists fragment existing narratives and assemble them anew.

The distance between reality and fiction, between what is familiar and unfamiliar, and the impossibility of showing this distance in images, are the central themes of Patricia Dauder’s drawings, films and slide projections. Her works analyse the way in which memories are constructed. Patricia Dauder’s working method involves fragmenting found images and reassembling them from a subjective point of view. The film and the drawings on view are an excerpt of Patricia Dauder’s exhibition “Teahupoo”, which was presented in May at the projectesd gallery in Barcelona. The Tahitian word Teahupoo designates one of the most dangerous and unique surfs at the eponymous location in Tahiti and is a mystical name for surfers. The presentation of her graphite drawings is not hierarchical. They depict abstract, cloud-like representations of nature as well as details of film frames – the medium of observation. The 16mm film “Forward” was shot in Pozo Izquierdo, a location for wind surfers popular throughout the world due to its incalculable swell and enormous wind speeds. Both the film and the drawings refer to the fleetingness of a certain moment and address what is incomprehensible in our reality. The intangibility and openness of any kind of mental projection forms the associative relation to Patricia Dauder’s works.

The construction and presentation of history through the media is called into question in Dani Gal’s sound, film and slide installations. Dani Gal focuses on how history is narrated. The starting points are historical documents, whose image and sound sequences are disassembled and then put back together again in a new way. By manipulating the relation of sound and image, the original message is modified and adapted to present-day listening and viewing habits. The print series Coupon adapts advertising pictures of recording devices and cameras printed in the German weekly SPIEGEL in the 1960s. Indispensable in any modern household, this new technology promised the possibility of documenting one’s own life. Dani Gal’s juxtapositions underscore the changes in viewing and living habits at the time and simultaneously raise the question of the extent to which individual experiences can actually be documented. The installation “The new terrorism” is based on the education kit of the same name for American schoolchildren from the 1970s. The kit consisted of a film strip, slides, a one-sided spoken record, a brochure and a game. It was meant to convey information on hidden terrorist threats. In Dani Gal’s installation, the film is separated into individual frames and shown as an endless slide projection, while the record with the explanations is played. However, both sources are now out of sync, making the constructed narrative structures clear.