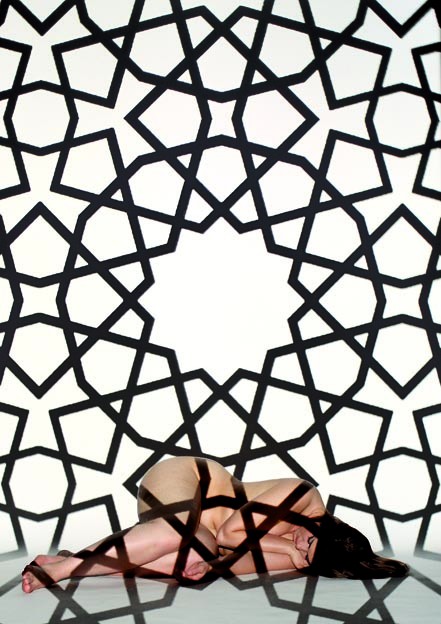 We are pleased to start our exhibition series upstairs with the German-Turkish artist Selma Alaçam. In parallel with each exhibition, we will present a project with young artists on the top floor of our gallery.

Growing up in different cultures and religions and the associated questions of identity and educational patterns form the starting point of Selma Alaçam’s videos and photographs. Collages of archival found footage integrated in installations, self-produced documentations and autobiographical sources segment and analyse the definition of different cultural spaces of interpre-tation. It is often Selma Alaçam’s own body that becomes the projection screen for the complexity of culturally determined rituals, gestures and symbols of Islamic culture.

The video work „Saç / Haare / Hair” deals with the ritual of wearing a headscarf of young, Muslim women in Turkey, who have found ways to cleverly circumvent this dictum by wearing a wig instead of a headscarf over their hair. The vertical installation of the TV image and the stoic concentration of those acting, who are shot in half-profile, simultaneously remind one of Western icon painting and thus reflect the state of „being in between”.

In the new series of photographs, Selma Alaçam projects ornaments, elements, colours and structures that originate in Turkish or Islamic culture onto the nude body. In the process, her body is newly dressed in a „second skin”, while it simultaneously disappears behind the traditional, colourful patterns that - depending on how one’s gaze is culturally shaped - can also turn into fragments of Western modernity.

Selma Alaçam was born in 1980 in Mannheim. She studied at the Staatliche Akademie der Bildenden Künste with Prof. Silvia Bächli. Her works were exhibited in 2010 at the Kunsthaus Baselland in the framework of Regionale 11. In June 2011, she will participate in a solo exhibition at the Museum ar/ge Kunst in Bolzano.
www.kadel-willborn.de