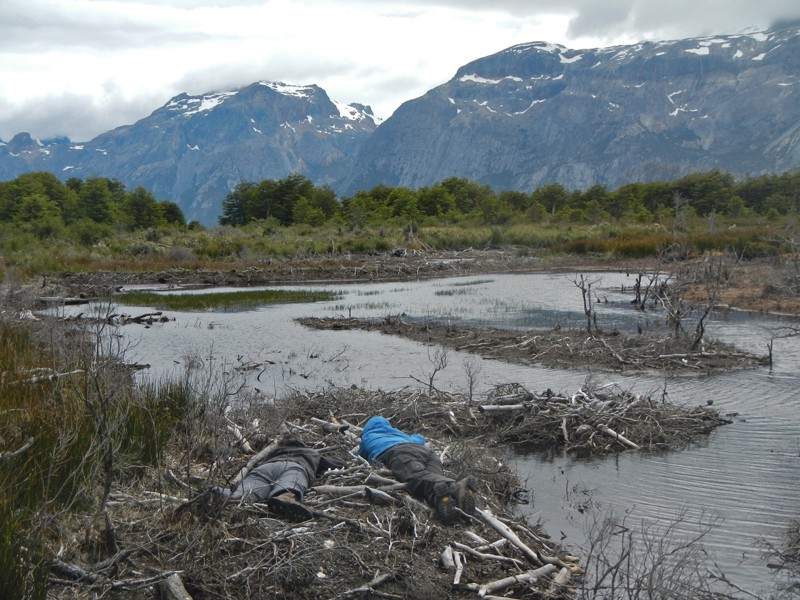 Beyond the End is an exhibition dedicated to a research and residency program initiated in 2010 in Tierra del Fuego by curator Camila Marambio. Over the years, the Ensayos residencies have given shape to a dialogue between artists, scientists, local inhabitants and Karukinka Natural Park. Based on the premise that only creative collaboration can efface frontiers in the field of biocultural conservation, Ensayos enacts the complex interdependence of humans, non-humans and matter with the urgency of maturing aesthetic sensibility in the face of scientific discoveries. The work in the exhibition attempts to give form to this multidisciplinary, multispecies research-based project.

After observing and interacting with the methods used by a group of conservation biologists working in Karukinka1 Natural Park in Tierra del Fuego (Chilean Patagonia), Camila Marambio, an independent curator, was stirred to question the uselesness of art. That is why, in 2010, she convinced Dr. Bárbara Saavedra, the ecologist who directs the park, to include artists as researchers. Together they organized a meeting that took place in February 2011, during which eighteen people (artists, scientists, local islanders and park rangers) met in Tierra del Fuego to speculate on some of the pressing conservation issues with the intention of unveiling the potential of transdisciplinary research.

This first inquiry residency trip to Karukinka was called ‘‘Ensayo #1’’, and later gave the whole initiative its name, ENSAYOS (Essays if we translate into English), due to the pragmatic trial-and-error approach which offers the possibility of rehearsing other ethics and worldings in search of novel ways to steward the environment.

With this desire in mind, ‘‘Essayo #1’’ drafted some issues to be addressed by three different groups of researchers. These are: the handling of the castor canadensis (the beaver is considered an invasive species by the scientific community in Tierra del Fuego), the governance of the archipelago’s coastal areas, and the Island’s social history.

...To the exhibition at Kadist (Paris)

Given that the “beaver problem” is considered to be the biggest threat to the conservation of biodiversity in Tierra del Fuego, Ensayo #2 picked up on this issue. From a dialogue between artist Christy Gast, Bárbara Saavedra, Camila Marambio, anthropologists Laura Ogden and Melissa Memory, and biologists Derek Córcoran and Giorgia Graells, an initial inquiry arose: how could they, as a research group, include the beaver in the decision making process about its own future on the island? This led them to rehearse various ways of listening to the beavers on the island, and to hear the call of other non-humans that demand fair attention. The beaver issue, represented in the first part of the exhibition Beyond the End at the Kadist Foundation in Paris, has broadened the scope of aesthetic viewpoints: in this dialogue between species and between disciplines there is an unexplored potential for action and reflection leading towards a practice of rhizomatic imagination that dissolves even the notion of species.

Tierra del Fuego in the city of enlightenment

Beyond the End, at Kadist Paris, gives researchers and artists the opportunity to gather for a one-week work session to discuss the matters that will concern ‘‘Ensayo #3’’. Articulated as a series of attempts to reach beyond questions about the subject and its identity, ways of knowing and how we know, humanity as the only form of culture, the work-week will aim at new types of questions: What is beyond us? What is non-human (within and around us)? or What is human from the perspective of the other? To inaugurate an inquiry into a post-human geography of Tierra del Fuego.

This work-week will take place after the opening (from June 1st to Saturday 7th), and include a series of presentations, screenings, performances and public actions, presented at Kadist, Musée de la Chasse et la Nature, Ciné 13 and Museum National d’Histoire Naturelle.